To Write About the Dark Side

“By the time you read this, I’ll be dead.” So begins IF I DIE TONIGHT, the latest novel by Alison Gaylin.  With nominations for Edgar, Anthony and ITW Thriller Awards, a Shamus Award, and an RT Reviewers Choice Award for Suspense, Gaylin has proven herself a master at pulling readers in and not letting go. That goes for the opening of her new book, a suicide note posted on Facebook by high school student Wade Reed. In the post, Wade says a goodbye to his mother and brother after he’s been accused of something terrible and has reached the end of his rope. “This will probably make a lot of you very happy,” he writes. The post has 1,043 likes.

IF I DIE TONIGHT is a cautionary tale—how a small town, an angry mob, and social media can be a lethal combination. Gaylin hits the mark in showing the manipulative power of social media and the dark side of humanity, in a compelling, honest way that she does so well. “What changed a lot with the advent of social media, is empathy,” she says. “The things I’ve seen grown-ups write on Twitter astounds me.” The book, she says, was partly inspired by Sinead O’Connor’s suicide note on Facebook. “Although she didn’t go through with it, what struck me is how it got thousands of likes. When you have that feeling of anonymity, that this is not real, the layers of empathy are taken away. Kids are most affected because they use social media more, and can sometimes be more emotionally fragile.”

IF I DIE TONIGHT takes place in the small town of Havenkill, where a popular high school senior, Liam, has been killed by a hit-and-run driver after a carjacking gone wrong. Aimee En, the victim of the carjacking, is a washed-up musician from the ’80s who reports the incident to the police, but she offers sketchy details and seems more concerned with her beloved car than with the victim. Her story doesn’t sit well with Pearl, a young cop on the case with a tragic past and a strong moral compass. Eventually, suspicions fall on another high school senior, Wade Reed, an artistic, brooding outlier who has no alibi and is obviously hiding secrets of his whereabouts. Rumors begin circulating on social media, anger turns into hateful posts, and before long you can’t tell who the real monster is—the hit-and-run driver or the town itself.

Gaylin, a USA Today bestselling writer, is a pro at portraying family dynamics and discord, and she writes with brutal honesty. “I have this mantra, keep it real,” she says, and you can literally feel the emotions of her characters emanating from the page. This is especially true of Wade’s mother. A single mom raising two boys, Jackie firmly believes in her son’s innocence. But since the departure of his father, Wade has been drifting into a world of solitude. His is mocked and tormented by other students, angry and scared about a future going nowhere. Gaylin so poignantly captures what many parents of teenagers feel today. In one reflective moment, Jackie compares the silent rebellion of Wade’s generation to the rock music that marked her own:

There was such power in loud music, such teenage energy and rebellion and soaring possibility. Who’d have thought, back then, that it would all go extinct within just one generation? These days, teens plugged themselves into devices, headphones wires spooling out of their ears like antennae. They kept their music to themselves, kept everything to themselves, and their devices and the friends they talked to on those devices, all of whom you couldn’t hear, couldn’t see unless you swiped their phones away mid-conversation to read the screen, and who wanted to do that? Who wanted to be that mom?  They shut you out. Your children shut you out of their heads, their lives. And that was a form of rebellion so much more chilling than blasting music or yelling. They made it so you couldn’t know them anymore. They made it so you couldn’t help.

This is the situation Jackie must cope with, wanting to help her son but unable to reach him. Even as the evidence begins to point to Wade, she still sees him as a little boy, walking around the living room on his father’s feet, smiling up at him. “There’s a tendency to think every story needs a hero and a villain, but sometimes life isn’t like that,” Gaylin says. “Everyone has flaws and good qualities, but people don’t seem to have patience for those gray areas. They want easy answers to everything.”

Alison Gaylin with her daughter, Marissa

IF I DIE TONIGHT is told from a kaleidoscope of viewpoints—Jackie, Wade’s younger brother Connor, Aimee En, and Pearl. But Gaylin uses another unreliable narrator: a series of Facebook posts woven throughout the story that give it even more flesh and blood. “I always like to have multiple points of view, and one other non-character,” she said. “In my previous book, What Remains Of Me, I had gossip magazine articles about a celebrity murder. Everything from TMZ to Rona Barrett’s Hollywood. So, the press and media became a point of view.” Not surprising, since Gaylin has written for various entertainment magazines and says she’s always been fascinated by the idea of fame. “All my books have someone connected to stardom.  I grew up in LA and used to go see bands from the eighties, so with Aimee En I wanted to create some former punk-pop-princess who had seen better days. She was a character I had thought about for a while, and she found her way into the book.”

Gaylin says her characters always have little bits of herself in them. “Which might scare people, because some of them are murderers,” she laughs. The story itself was very loosely based on a hit-and-run incident in a nearby town, involving two boys from rival schools. “One of the boys had a 13-year-old brother, and that’s how I got the idea for Wade’s younger brother, Connor. I thought, what would I do if this was my brother? At one point, I would be looking up to him, but what happens when he suddenly becomes a pariah?”

Pearl, the devoted police officer with a biting wit, was a character Gaylin had been thinking about for years. To get a realistic portrayal, she did some research. “I couldn’t write about her working in a small-town police station without having been in one, or it would come off sounding like a small-town police station I’d seen in a movie. So, I took a tour of the Rhinebeck police department and that’s how I found out they have a small staff, they’re all working part-time, and they don’t even have a holding cell. They have a holding bench, really, with handcuffs attached to it.” She said that touring the station helped her develop the character. “I knew Pearl would find the place different than what she was used to. She wouldn’t just be oblivious to it.” 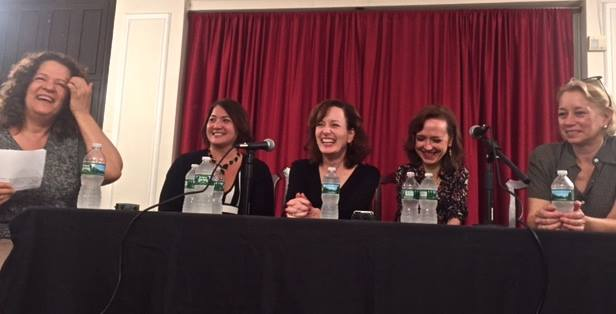 One of the most dramatic moments in the book is the revelation that Pearl shot her mother when she was only three years old. It’s both shocking and timely, in an age when toddlers are unfortunately shooting people on a weekly basis. “You so often read these stories about a kid who picks up a gun and accidentally shoots a family member. Can you imagine a person, before they even learn how to read, they’ve killed somebody? Where do you go from there? What happens to your family? With Pearl, I knew it was the worst possible scenario.”

Gaylin says she wanted to be a writer since she was a kid. As an only child without brothers or sisters to talk to, she kept long journals to get out her feelings, and later she wrote short stories. “I got good grades in English and thought, all right, I’m going to be a writer. Then, when I was in high school I got a B in English and asked my teacher about it. She said, ‘I only give A’s to kids who will one day write professionally’.” The comment crushed Gaylin, and she gave up her dream of being an author. She was doing a lot of plays at the time and decided to concentrate on theatre. That decision, she says, helped her become a better writer.  “I feel like writing a character is like doing improv and creating scenes is almost like directing. Plays are a great transition between acting and writing novels because acting is creating characters in your mind. I still do that when I write.” Lucky for her readers, by the time Gaylin finished college, she found her way back to writing books.  She describes it as an addiction, a compulsion. Like many authors, she says, “When I’m not writing I get depressed.”

Alison and husband at the 2015 Edgars

Mysteries and suspense come naturally to Gaylin. Her subtle red herrings and foreshadowing give readers just enough clues to try to guess without actually guessing. “I don’t like it when the solution comes out of nowhere,” she says, and offers some excellent advice. “Whatever happens in a novel, it’s got to be earned. That’s important. I’d rather have readers figure out the mystery than say ‘I never would have guessed that’. Sometimes, when I think I’ve telegraphed too much, I’ll go back and cut down on some of the clues, so it’s not too obvious. The key to writing mysteries is keeping in mind that everybody’s got a secret. Sometimes they are huge, and sometimes almost nothing. But these are things the characters don’t want revealed, and if each of these secrets come out during the course of the book, that creates pretty good suspense.”

Sometimes, a novel will change the way we see the world, laying bare the ills of society. IF I DIE TONIGHT does just that, with subtle messages on heavy issues; social media, teenage angst, divorce, loyalty, vengeance. Gaylin says that’s okay. “As writers, we can’t help but state our point of view on the world, especially writing crime fiction because it’s about social issues.” At the same time, she thinks you can’t get too preachy. “We write fiction, and when we start crossing the line, people start to lose interest.  But if I can get someone to see a greater truth and if I can get people to say, ‘Oh my gosh, I never looked it that way’, that’s the best thing that can happen. You want to make people see things from another perspective. If they care about your characters, they’ll care about what you’re trying to say.”