How a Newsman Turns News Into Suspense 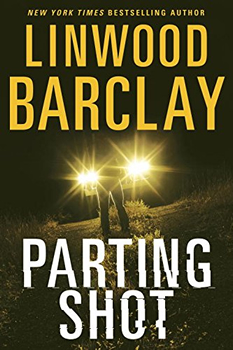 For those of us who love our thrillers, there’s nothing better than diving into a suspenseful read that grabs from the first page. And so it is with PARTING SHOT, the latest release in the hugely popular Promise Falls series from internationally bestselling author Linwood Barclay. But this being Barclay, there isn’t just one intriguing plot in play—there are two.

First up, cop turned private investigator Cal Weaver is asked to provide short-term protection to a wealthy young man, Jeremy Pilford, who has been convicted of killing a friend while driving intoxicated. Pilford’s defense, that he has led too pampered a life, means that he is on probation but has escaped prison. The sentence has led to a huge social media backlash, with Pilford an object of hatred and derided as “The Big Baby.” Threats have become physical. Weaver takes on the case, although with some reluctance. Second, we have Detective Barry Duckworth of the Promise Falls Police. Duckworth is called to investigate an assault on another young man, Brian Gaffney. Gaffney has been found wandering around Promise Falls, suffering from amnesia and unable to remember anything about how a large, ugly tattoo was carved onto his back.

These two seemingly unconnected plots are of course quite the opposite. Both strands draw ever closer together in relentlessly building tension, leading to a nail-biting finale. This dual plot line came about as Barclay had, as he sometimes does, two different ideas that he liked. “Rather than try to decide whether to write one or the other,” he says, “I look to see whether there’s a way to dovetail them. That’s definitely what happened with PARTING SHOT. I had an opener about a man who wakes up from an apparent abduction to learn he has a nasty tattoo on his back. And then I was intrigued by an actual news story about the young man who used the so-called ‘affluenza’ defense in a court case—that he led too pampered a life to know right from wrong. It didn’t take me long to come up with my own version of that story, and find a way to link it to the tale of the tattoo.”

The plot of PARTING SHOT is also enriched by the fictional setting of the town of Promise Falls. Barclay views it like an island. “It’s not as though it’s cut off from the rest of the world,” he explains. “It’s not Under the Dome. But it is its own self-contained unit. There’s a good chance many of the residents know one another. If they bump into each other it’s not coincidental enough to make the reader groan with disbelief. It also means that when evil strikes, the sense of suspicion is heightened. The bad guy really could be your next-door neighbor.”

PARTING SHOT isn’t Barclay’s first visit to Promise Falls. It’s a standalone novel and I can vouch for his view that you don’t need to have read his preceding trilogy to appreciate it. “I’ve jokingly been referring to PARTING SHOT as the fourth novel in the Promise Falls trilogy,” he says, “which has led readers to think that maybe math is not my strong suit: ‘The guy can’t count.’ I’ve actually written Promise Falls novels before the trilogy—Too Close to Home and Never Look Away are two—but the plot lines of Broken Promise, Far From True and The Twenty-Three were intricately linked. So I knew returning to Promise Falls was something I could do. The events in the trilogy were so catastrophic that they could not be ignored.” Those events are indeed referred to, and rather than making the reader feel they’ve missed out, they further enrich the likeable characters of Weaver and Duckworth.

A key issue in the novel is trial by social media and its attendant behaviors. Barclay admits he’s a keen user of social media. “I’m on it countless times every day, particularly Twitter. I like it, but this new online world has a very dark side. The sickest people have been able to crawl out from under their rocks far enough to reach a keyboard. There has always been bullying, but it can be done on a grand scale now.”  And even when bullying is not necessarily at the heart of every matter, he does question the quality of opinion and judgement. “The Internet has little room for nuance. You’re wonderful, or you’re a monster. There’s not much in-between.”

Barclay also weaves in many examples of social media (ab)use that are close enough to real life to be familiar to readers. The speed with which abuse can be disseminated is something he finds remarkable. “I remember that woman who tweeted something tasteless as she boarded a plane to Africa and had lost her job by the time she’d landed. The world had turned against her during her flight.”

As for the fate of Jeremy Pilford, “The Big Baby,” readers will have to discover for themselves in 2017’s PARTING SHOT. Barclay has his 2018 release lined up too and it’s called A Noise Downstairs. “It’s a complete standalone,” he says, “with not one character from a previous novel, although it’s set in Milford, Connecticut, where I have set several of my other novels, most notably No Time for Goodbye.”

And that’s not all. “Next year will also see the sequel to my first thriller for kids. Chase came out in July (primarily in the UK, Ireland, and Canada) and Escape will be out next spring. 2018 will also see the release of a six-part TV series in France based on my novel The Accident, and a Canadian film by director Gail Harvey based on my book Never Saw it Coming. I wrote the screenplay for that.”  As for 2019, Barclay tells me he’s started writing his novel for that year.

Such success was a long time coming for Barclay. “All I wanted when I was 18 was to be Ross Macdonald turning out a mystery novel every year. It took a little longer than I might have liked. Three decades in newspapers intervened. When my first novel came out in 2004, it was so sweet I thought it’d never get better than that. But it did.”

Barclay says he would most likely have a word with his 2004 self as well.  “I might say, ‘Be careful what you wish for.’ With success comes pressure. You want every book to better than all that came before it. Sometimes you manage it, sometimes you don’t.”

With PARTING SHOT, he most definitely has managed it. And then some.

November 6 - 11: "Is tone linked more to the author’s or the character’s attitude?"