A Gift for Finding the Bizarre 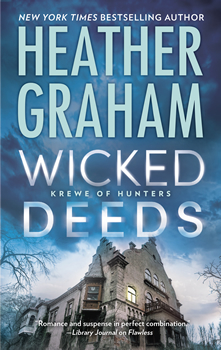 Paranormal mystery fans will need no introduction to Heather Graham and her hugely successful Krewe of Hunters series, as her latest, WICKED DEEDS, is book Number 23. As in usual Graham style, it’s a fast-paced read with large measures of creepiness, romance, and fun as well as an intriguing mystery.

Krewe members historian Vickie Preston and Special Agent Griffin Pryce are on their way to set up their new home in Virginia, but they detour for a romantic weekend in Baltimore. Their plans take a hit when a popular author is found dead in the basement of an Edgar Allan Poe-themed restaurant. Poe of course died in Baltimore on October 7, 1849. The bizarre circumstance in which the corpse is found has disturbing echoes of Poe’s life and work, and means that the services of the Krewe are needed. Yet more deaths quickly follow that bring the horrors of Poe’s dark fiction to life, putting Vickie and Griffin in a race against time to find the killer.

Unexpected help arrives—Poe himself appears to Vickie in dreams and visions with cryptic information about the murders. It’s clear that Graham is a huge fan of Poe and it’s a love that started very early in life. “I don’t even remember when I first started reading Poe,” she says. “But I was a lucky kid. Both my parents were avid readers, and I was happy to follow right along. The first book I really remember that created the seeds of my fascination with Edgar Allan was a Treasury for Young Readers. There were stories about presidents, scientists, actors, artists—and writers, Poe, of course, among them.”

Young reader Graham was also a young performer.  “I liked to read his work aloud and—probably not so kindly—read aloud with my best creepy intonations to my friends, other neighborhood children!”

In the novel, Vickie and Griffin get to speak to Poe. If she were to ever get the chance, Graham already has her questions ready and they concern Poe’s disappearance in the days preceding his death. “To this day, we can only speculate on what did happen to Poe,” she says. “There are hints and clues, but no definitive answers. That is something I would want to know. He was discovered in a delirious state and never did become coherent. Many believe he was taken in a voting fraud. He was wearing clothing that wasn’t his own. Others believe that, even though the trip was to bring his deceased wife’s mom (his aunt) to Virginia to live with him and his new wife, the proposed new wife’s sons went after Poe. All speculation!” 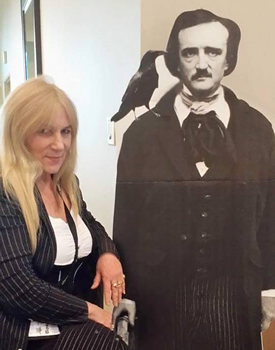 And that’s not all. “I’d want to smack him, too, of course. And then not. I (as so many people today!) have loved ones who have been addicts. I’ve seen the struggle, and what torture it can be. I would want to help him—and convince him that a genius such as himself should have guarded his health and been around to create more and more fantastic stories for readers—such as me!”

Graham’s enjoyment of the work of Poe is evident in the novel, as is of course is her usual skillful handling of the paranormal world in general. Again, her introduction to other worlds is something that comes from childhood. “I spent a lot of time growing up with my Irish grandmother. She believed in everything. And her stories were great. The Scots weren’t bad at this either; to this day, I don’t know if some of my dad’s stories were true—or totally made up!”

A fertile Celtic imagination has made her consider many possibilities. “I like to believe that there is more—perhaps we, as humans, can’t accept that we might just really vanish. I do believe in a greater power, and that being the case, good and evil—and maybe ghosts. I’m open to the concepts of energy, spirits, and the human soul. I have been places where there is a feel of something—maybe just history. The battlefield at Gettysburg, Westminster Abbey, Notre Dame, the catacombs, and so on.”

Those visits are just a few among the many and varied outings for Graham and she loves every minute. “I’ve been lucky because of what I do—I have gotten to play Abby Borden for a Biography Channel show on the Lizzie Borden House. Chynna played Lizzie; how many young actresses get to pretend to hack their real moms to death? Honestly, she was far more freaked out than I was! I’ve had a séance at the House of the Seven Gables, and, with friends, the Peace River Ghost Trackers, investigated the Queen Mary, the Spanish Military Hospital in St. Augustine, the Myrtles Plantation, and many other venues. And, a hint, if I really heard/saw something? The Queen Mary.” 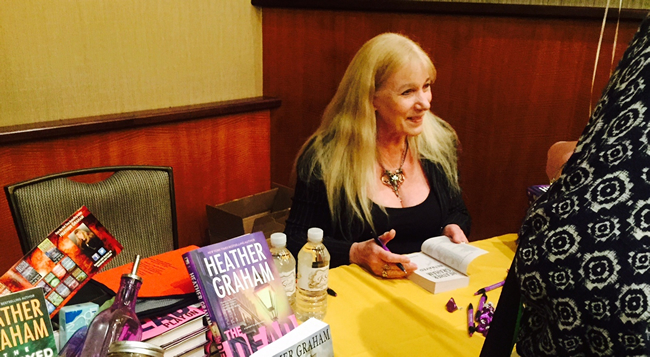 While WICKED DEEDS is outing #3 for Vickie and Griffin, there are another twenty in the series and it’s one with a special place in her heart. “I love doing the Krewe of Hunters,” she says. “Each year, the three are planned together.  Next year, a trio of brothers—with deceased parents, including an acting-diva mom—take on the murder of an aging actress at a comic-con, a killer mimicking the Black Dahlia murders, and a man dead less than a day, but discovered down in the bowels of the wreck of a slave ship off Key West.”

As if that wasn’t writing commitment enough, there’s plenty more in the pipeline for the indefatigable Graham. “In November, I have out a co-written book, very different, with a young actor, Chad Michael Murray, called American Drifter. No paranormal, just the haunted mind of a young soldier, trying to put himself back together by exploring a new life down in Brazil. Adventure, suspense, and lots of twists and turns.

“I’m also still working with the New York Confidential series, featuring Finnegan’s—my Irish pub down on Broadway—and criminal psychologist Kieran Finnegan and FBI Special Agent Craig Frazier. Thanks to ITW, I, and others, get to spend a day every year at the NYC FBI offices, which helps tremendously in most of my work. I also love the opportunity to do short stories for anthologies, some for ITW, a few for friend Jonathan Maberry, and others as they may pop up. Right now, there’s a novella featuring characters Cafferty and Quinn, Toys in the Attic, and, happily, I do a novella each year for 1001 Dark Nights.”

I did wonder, as I’m sure others may well be, how Graham does it. “So, here’s the truth,” she says. “I’m horrible at housekeeping. I can’t do anything creative such as design, draw, knit, sew. But, so far, what I do love to do is tell stories, think them out, rework them, find out about the zillion truly bizarre things that have happened in history, and twist and turn them as well.”

And for all us storytellers, Graham has the best motivational advice—the well is never, ever dry. “The great thing is that I think it might be impossible to run out of bizarre events in real life—the kind that let you steal and build upon!”

Trend Report: Where is the Horror Novel Headed?