Each New Novel Is the First And The Last 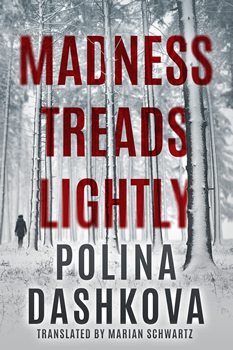 I’ve never met anyone who loves books and isn’t a fan of Russian literature, to some degree. Who doesn’t love Crime and Punishment, War and Peace, The Master and Margarita, or watching the classic film version of Doctor Zhivago after reading the novel? It must be quite daunting to be a Russian novelist, with all that greatness swirling in the air, but I’m thrilled to present someone this month who is a living embodiment of that great literary tradition.

Dubbed the “Russian Crime Queen,” Polina Dashkova is modern-day Russia’s most successful author of suspense novels (and possibly the most successful, period). She’s sold 50 million copies of her books, and her work has been translated into German, Chinese, Dutch, French, Polish, Spanish, and English. She’s also a fascinating person to interview, and our discussion ranged among topics as diverse as serial killers, her literary influences, advice for writers, and Polina’s new release in English, MADNESS TREADS LIGHTLY.

Polina, thank you so much for taking the time to chat. First off, I’m curious about your background. Are you from the same area of Siberia in which MADNESS TREADS LIGHTLY is set?

Thank you for your questions. No, I was born in Moscow.

How did you get your start as a writer?

I began to write poems and fairy tales when I was six.

I graduated from the Maxim Gorky Literature Institute. When I was a student, I wrote an epic poem with lots of characters and a complicated plot. My poetry teacher told me that one day I would write novels and become a very famous novelist.

I wrote my first big novel when I was 36, a thriller, Blood of the Unborn. I took out the telephone directory and phoned a few publishing houses. One of them invited me to bring in my manuscript the next day. The editor, a slim, very tired man, took my thick, typewritten manuscript and told me to wait a month or two. They’d call me. They called three days later and said they’d publish my book.

The book appeared three months later, and the next day I woke up famous.

You’ve sold over 50 million books! That’s incredibly impressive. Have you changed as a writer now that you are so phenomenally successful?

Yes—because life is always changing.  I write each new novel as if it were the first and the last. Every novel changes me. Usually when I finish, I feel happy, tired, devastated, and afraid I won’t be able to start the next novel. But time passes, and step by step, word by word, page by page, the next novel begins.  Each time it’s not just a new story, but a new me.

No—because I have my own writing style and certain principles. For example, there has to be a happy ending.

Why do you think your work resonates so well with readers?

Success is a mysterious thing. All I know is that I try to do my best and I respect my readers.

I’m a huge fan of Russian literature. I think most of us are! Who are some of your favorite modern Russian crime writers, and who do you consider your literary influences?

To tell the truth, my favorite Russian crime writers are not very modern: Fyodor Dostoyevsky with his Brothers Karamazov, Demons, and Crime and Punishment; Anton Chekhov with The Shooting Party; Mark Aldanov with The Key and The Escape; and Vladimir Nabokov with Laughter in the Dark, The Eye, and King, Queen, Knave.

As to literary influences, when I began writing novels, my idea was to write as nobody before ever had.

Can you tell us a bit about your body of work? How many novels have you written, and do they follow a common theme?

I have written 18 novels, all very different. Five of them are about serial killers, including two about the years of Stalin and his repressions, the beginning of the Second World War (surely Stalin and Hitler were the main mass serial killers in the world).

I wrote spy, political, and historical thrillers about the Cold War, the Russian Revolution, and the Civil War. I studied a huge number of archival documents and memoirs. In my novels, the past intertwines with the present, and real historical events seem incredible.

MADNESS TREADS LIGHTLY is a fantastic book, and I understand that you have a special connection to the story. Do you care to elaborate?

Thank you so much! When my readers think I have a special connection to the story, that’s the highest praise. It means I really did my best.

A heavier question: Has your perspective on serial killers changed in any way after researching and writing MADNESS TREADS LIGHTLY?

I understand that you once visited Siberian prisons. How did that experience affect you? Did it help inform the novel?

The smell of that place was very special—the smell of hopelessness, but eventually it stopped affecting me, at least no more than any life experience.

For you, what is the hardest part of crafting a novel? The easiest?

The hardest part is the beginning, the first 20-30 pages; the easiest is reading and editing the written text.

I like to laze, meet my friends and chat, walk around the city or in the parks, watch movies, travel, read on the couch the whole day. Sometimes, when I’m very tired or nervous, I like to do something with my hands—sew or knit. It calms me, like meditation. I learned how to do those things in the Soviet era, when I was a young girl and getting clothes was a great problem.

If you want to write, write.

You can write every day and force yourself to produce. That’s not bad, but if you write under compulsion, too much and too rapidly, you are sure to lose quality.  Sometimes it’s better to take a break.

Leo Tolstoy said, “If you can live without writing, don’t write.”

How would you like to be remembered as a writer?

If anyone 50 years later opens one of my books, reads it to the last page, and doesn’t regret the time spent, that will be enough.

What can you tell us about any upcoming releases? What new projects do you have planned?

I’m writing a new novel, a historical thriller. The plot is based on real events that took place in Moscow in 1977.

The Names of Dead Girls by Eric Rickstad