A Ripped From the Headlines Murder 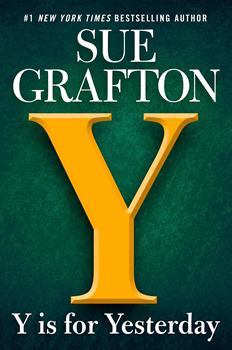 Sue Grafton is very much aware that, having written and published Y Is for Yesterday, she only has one book left in the alphabet, and for the legions of fans of the 35-year Kinsey Milhone series, there is going to be some separation anxiety.

“Me among them,” she says with a laugh. “On the other hand, I don’t want to keep going just because I can do it.”

For the final novel, titled Z Is for Zero, it’s important to her to finish with a certain style. “I want to make sure I don’t slack off,” Grafton says. “I have made a point of not cheating, not taking shortcuts, and I don’t want to get like a barn sour horse, galloping at the end.”

She continues, “I do not want to end the series with fireworks, I want the book to be like the other books, with a good solid story, a beginning, middle and end, and a sense of who’s who. I don’t mind finishing up a couple of threads, I don’t want to leave people hanging. But I don’t feel any obligation to wrap it all up with a bow.”

But before there is Z, there is Y Is for Yesterday. Readers are definitely responding both to the momentum of the series reaching the end and the storytelling strength of this particular novel.  As of September 1, Y Is For Yesterday was No. 1 on the USA Today bestseller list and the third most read book on amazon.

In Y, Grafton has created a tense and involving story that delivers two perspectives and runs on two timelines. Some chapters are narrated in the first person by Kinsey, and in others we see the characters she’s investigating, both now and then. The key to the plot is a group of teenagers at a high school catering to wealthy families, and a test-cheating scandal that leads to a worse scandal revolving around a sex tape, and then to an even more serious crime, a murder.

Grafton did a great deal of research for her plot. It is based on two real crimes that took place in California, one involving a sex tape. “The son of the sheriff got involved with two or three other guys and mistreated a girl sexually and filmed it and circulated it among their acquaintances and the poor girl didn’t even realize what was going on until she was thoroughly exposed,” Grafton says. “There was a big court case over that and it was tricky because this was the kid of the sheriff, you know.”

The other case she drew on involved a 15-year-old kidnapped by drug dealers because his brother owed them $1,200. It was a kidnapping in which a large group of teenagers knew what was going on but no one told a parent or called the police until it was too late and the boy was dead. In reading the testimony, Grafton was struck by “how clueless these kids were and how irresponsible. They disassociated themselves and felt no particular responsibility.”

In Y Is for Yesterday, while Kinsey is investigating a case involving former high school friends who know much more than they’re telling, she has her own lethal reminder from the past to worry about. Throughout the book she is fighting down fear and taking steps to protect herself from Ned Lowe, a serial killer who is determined to get to her. Those parts of the book are downright scary.

Asked how she depicts fear so well, Grafton says, “You have to stay in the moment, and really imagine and not try to paint it with adjectives. What is she seeing, what is she smelling, what is going through her mind?”

Writing isn’t easy, Grafton is the first to admit. “You never know if you are pulling it off or not.” Still, one writing technique she does not use is relying on the feedback of early readers, often called “beta readers.”

“When I am working on a book, nobody reads it—nobody,” she says. “If I get stuck, I start whining and I go into my husband’s office and talk about it. ‘I screwed it up—you’ve got to help me.’ And most of the way he helps me is to assure me that I’m not off track. I just lose confidence once in a while because you’re so close to the bone.”

The idea of sharing your novel with a group before it’s finished horrifies her.  “Here’s what’s puzzling to me. Lately I’ve been reading books and at the end there’s this lengthy mention and thank you for thirty people. I see ‘Oh, Joannie, thank you so much for cookies,’ and then there’s Barry and Sandra. I think, Has this writer given a draft to every single one of those people? Because that means the work is homogenized. Everybody got to vote and everybody got to make decisions. The book is an amalgamation of other people’s opinions.”

It’s downright dangerous for a writer to operate like that, Grafton believes. “Three-quarters of the time your instincts and impulses are correct and theirs are not. Once you start changing a little bit here and a little bit there, it throws the dynamic off. You don’t have the book you thought you were writing.”

As for the book that Grafton that will be writing after Z, for now she is keeping it loose.

“Maybe I’ll write a standalone,” she says. “That might be fun.”