The Twisted Stories Behind Closed Doors 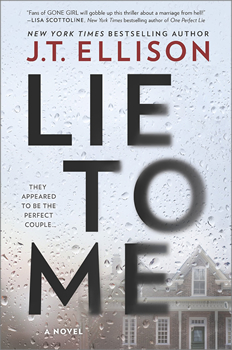 Domestic noir peels back the layers of the most intimate relationships, twisting what should be loving and nurturing bonds into something dark and dangerous. The mundane, familiar nature of the material is, perhaps, what makes these novels so gripping. New York Times and USA Today bestselling author J. T. Ellison understands how to create a gripping read. Ellison’s latest novel, LIE TO ME, was called “[An] exceptional domestic thriller” by Publishers Weekly in its recent starred review, and author Lee Child called the book, “Wonderful … a one-more-chapter, don’t-eat-dinner, stay-up-late sensation.” An award-winning, veteran crime writer with more than a million books in print, Ellison has quickly made a name for herself in the domestic noir genre.

“I love writing splashy, headline-driven crime novels,” Ellison says. “But I also enjoy the challenge of writing stories about ordinary people—not cops, not serial killers—stories that examine what might be happening next door without you knowing about it. Something has always fascinated me about what’s happening behind closed doors. What are people really like when no one’s looking? Combine all that with a trip to Paris, and a crazy idea about a murder at Sacré-Cœur, and a vision of the perfect literary couple who aren’t so perfect after all. Voilà, a domestic noir, ready to be written.”

Indeed, LIE TO ME, Ellison’s second standalone thriller (after No One Knows, 2016), follows Sutton and Ethan Montclair, a seemingly perfect couple living a seemingly perfect life. But the ideal existence they’ve portrayed to the outside world is a lie. When Sutton disappears, she leaves nothing behind except a note asking her husband not to search for her. Friends speculate. People gossip. The media question what really happened to Sutton Montclair. Only what really happened to Sutton is a nail-biting, beautifully written rollercoaster ride through lies, betrayal, and many dark secrets.

“LIE TO ME was a blast to write,” Ellison says. “Though it about drove everyone around me mad, because I was as deep into the story as any book I’ve ever written. It was a glorious challenge.”

Ellison is no stranger to a challenge. In addition to standalone thrillers, Ellison writes the Lt. Taylor Jackson novels and the Dr. Samantha Owens series, plus she co-authors the international thriller series A Brit in the FBI with Catherine Coulter.  On top of that, in 2015 she became the co-host of Nashville Public Television’s literary television show,  A Word on Words.

“A Word on Words is a Nashville staple,” Ellison says. “The show ran for 40-plus years under the stewardship of the brilliant John Seigenthaler, who kindly had me on the show for my debut novel, and subsequently invited me back several more times. He became a friend, and I miss him terribly.” When Seigenthaler passed away, Nashville Public Television didn’t want to lose the show, so Ellison’s producer reimagined it into its current iteration. “[Linda Wei] took the show on location in Nashville with thematic shoots, bringing in top-flight authors to discuss their work, and hiring me and another local author, Mary Laura Philpott, to host.” Asked whether it was hard to go from in front of a keyboard to in front of a camera, Ellison is gracious. “I was reluctant at first: it’s one thing to be interviewed on television, it’s an entirely different thing to be the host. But it turned out to be an absolute delight. And winning the Emmy was incredibly meaningful. The show is a love letter to books and authors, and of course, to John. You can’t go wrong there.” 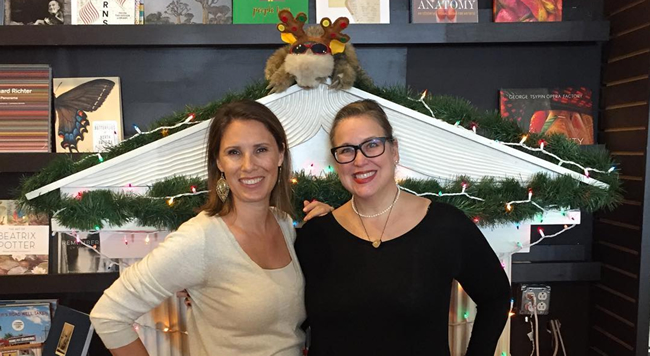 While Ellison spends time interviewing authors about their writing lives, her own journey is a compelling lesson in finding—and doing—what you love.

Ellison went to high school in D.C., surrounded by students whose parents were movers and shakers in the country’s capitol. It’s no surprise, then, that her career started in politics. “I worked a few campaigns, had three White House internships and a stint on the Hill, and my first job post-college was working in the White House in the Office of Science and Technology Policy as a confidential assistant to the Director….I moved to Commerce to be Confidential Assistant to the Secretary, did some economic policy and international business, all the while getting my Master’s at George Washington.” A lost election had Ellison out of a job, so she switched to marketing and finance in the private sector.  “As fun and exciting and heady as all these positions were, none of it felt entirely right. I chafed against the rules, the expectations, the path ahead.”

A move to Nashville was the catalyst that changed Ellison’s career path. “When my husband took a job in Nashville, and I couldn’t find anything there that matched my rather unique skill set, I fell back into my true love, writing. It was like coming home. Nothing has ever felt so right, and I’ve never looked back. I also haven’t written a full-blown political thriller yet, but one day I’ll take that particular plunge.”

And no doubt she will, to the delight of her many fans.

Despite all she has going on—in addition to being a bestselling, prolific author and television personality, Ellison runs her own publishing business (in 2015, she founded Two Tales Press)—Ellison strives for work-life balance. “I need gym time, I need reading time, I need cooking and cleaning and kitty playing time. It’s funny, ten years ago I would have laughed at myself trying to find a better balance, because all I did was work. I want to live a little now, too.”

So given Ellison’s success and her unique perspective on the industry, what are her thoughts for new and aspiring authors?

“Stock your store with as much of your own work as possible,” Ellison says. “And always, always have a Plan B. I’ve always had a single goal, and that’s to write books people want to read. The industry has changed so dramatically since I started only a decade ago, so I’m glad I haven’t been trying to keep ahead of the trends. But first and foremost, you have to finish the book. And then finish another one. And another. All the marketing in the world, all the social media campaigns and newsletters and bookseller outreach and writing groups will matter not a whit if you don’t have great books to publish.”

Ellison’s number one piece of advice? “Don’t fall prey to the siren call of the business. Focus on your words, your stories. The rest will come.”