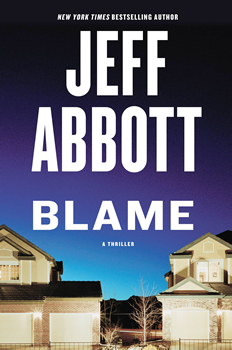 Jeff Abbott—author of the highly-acclaimed new thriller, BLAME—had to deal with his own stranger-than-fiction, real-life drama at the same time the book came out.

On July 8, just 10 days before publication, Abbott’s house in Austin, Texas, burned down when it was struck by a huge bolt of lightning. He and his family fortunately made it out safely, but they lost virtually everything they owned inside.

“I didn’t have shoes,” he recalls now. “We had on flip-flops and had to go buy shoes the next day. I didn’t have my wallet. We (his wife, two teenage sons and a relative) were all inside, but got out in a couple of minutes. It was a massive bolt of lightning. We knew immediately we’d been hit. A neighbor said it sounded like a bomb had gone off.”

Abbott is grateful that he and his family got lots of help from friends and neighbors in the aftermath of the fire, but he was especially moved by the outpouring of support from other authors—many of whom urged readers to help him by going out and buying his new book, BLAME.

“There was this whole big movement to pre-order the book and it was overwhelming,” Abbott says. “I was getting offers of furniture, places to live from authors who said they were going to be gone for a period of time …it was just overwhelming. That sounds like a cliché word to me because I’ve used it so much. But it is. It was very moving, very touching, and I’ll be forever grateful to people for the love they showed me and my family.”

The new book is a standalone—not part of his hugely popular Sam Capra series—about a young woman named Jane Norton who was in a terrible car crash that killed a friend, and left her with amnesia.

“This car crash has destroyed her life,” Abbott says. “She’s homeless, she can‘t remember the years previous to the crash, she’s an outcast. And then someone claims they know what really happened. She has to solve the mystery of not only what happened at the crash but also the truth about who she really was at the time.”

Abbott says he got the idea for BLAME from reading memoirs of people who suffered from amnesia.

“If I can take something that’s popular fiction now (the unreliable narrator, as in Gone Girl or The Girl on the Train), and it can have a new twist or take on it, that feels like a book to me. And so I said, I have to write this.”

One challenge he found daunting at the beginning was writing much of the book from the perspective of a young girl who was in high school when the accident occurred. “I was terrified to do it.”  But he said he got encouragement to go ahead with the idea from some prominent women author friends, including Laura Lippman, Megan Abbott, and Alison Gaylin. 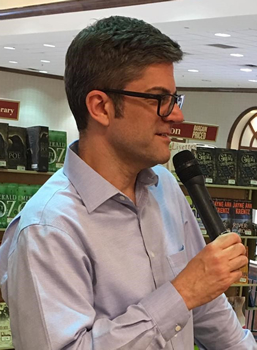 “I’ve never been in her situation,” Abbott explains about the young girl character of Jane Norton,” but I’ve never been in the kinds of situations like Sam Capra has either. Also I live with two teenagers. (his two sons are 15 and 18). Wherever there are teenage boys, there are often teenage girls. I tried to listen to the tone of how they interact, how they talk. And I decided: ‘If I fall on my face, I fall on my face.’”

Of course, Abbott had to deal with promoting the new book at the same he and his family were living in temporary quarters and dealing with all the aftermath of the fire that destroyed their house. He also had a deadline of July 31 for a new book he was finishing writing. “I took a couple of extra days considering my house had burned down,” he laughs.

But don’t worry Sam Capra fans, Abbott hasn’t forgotten about his most popular series character, a betrayed ex-CIA agent who owns bars around the world while battling international crime.

“I have a really great idea for a Sam novel,” Abbott says. “I just have to find the time to write it. I think the series may take a jump forward in time. I wouldn’t be surprised if five years had passed in the Sam universe.”

He’s also working on a possible TV miniseries based on his thriller, Panic.

But much of his time now is also spent trying to get his family life back to normal—or as close as it can be. Fortunately, they were able to rent a house in their own neighborhood while working with insurance adjusters and rebuilders on their burned-out home. “The aftermath of a fire just takes over your whole life,” he said.

Asked now if he might ever use it as material for one of his books, Abbott laughed and said that he’d been asked that question lots of times. “People were asking me that while the house was burning down. But I just want to move forward and put it behind us. Have a fresh start. I don’t know if I’d ever put this in a book.”