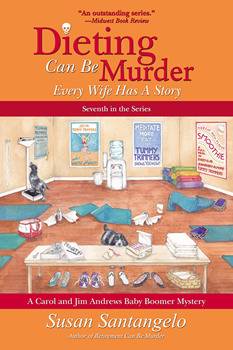 If you haven’t already discovered how much fun a couple of baby boomer amateur sleuths can be, it’s time to find out. Check out Susan Santangelo’s latest novel, DIETING CAN BE MURDER.

The story begins when Carol Andrews notices that she’s gained a few extra pounds during her second honeymoon with her husband, Jim. She joins Tummy Trimmers, a new, holistic approach to weight loss, but her plan is interrupted by another group member, who collapses on Carol and dies, right after completing a meditation exercise.

Carol and Jim Andrews are the stars of the Baby Boomer Mystery Series. Jim, a retired executive from a major New York City public relations company, has been married to Carol for more than 35 years and they have two adult children. Jim now writes a column for the weekly newspaper in their hometown of Fairport, CT—but Carol is the real amateur sleuth.

“She’s very approachable and a good listener, so people tell her the darndest things,” Santangelo says. “She’s very curious—some people even call her nosy. She may ask you a lot of questions about your job, so be careful what you tell her.”

Basically, Carol and Jim are really just an ordinary long-married couple of a “certain” age who happen to become involved in solving mysteries. So when the evidence points to murder at Tummy Trimmers, the ever-curious Carol can’t resist adding sleuthing to her personal weight loss routine.

That’s one point that makes this pair unique. In the best-known sleuthing couples, like Nick and Nora Charles, the man is generally the lead detective. Even Agatha Christie’s Tommy and Tuppence worked as a team. That’s definitely not the case in the Baby Boomer mysteries.

“Carol is definitely the leader,” Santangelo says. “And poor Jim spends a lot of his time trying to talk her out of doing any more sleuthing.”

Another unique and fun element of these novels is the baby boomer theme. Santangelo admits she centered on baby boomers because they’re people from her era.

“There are over 78 million baby boomers in the U.S., many of whom are either approaching retirement or have already retired,” Santangelo says. “It’s like a tsunami! And nobody seemed to be writing about the issues they’re all facing. For example, what is the emotional impact of retirement on a long-term relationship, especially if one partner has worked outside the home and the other has stayed home to raise the family? Now, that relationship balance has completely shifted—they’re both home at the same time. It can be really traumatic. I felt that was a story that should be written.”

And write it she has, in seven novels so far. Of course, Carol and Jim face the one obstacle that plagues all amateur sleuths: solving the mystery without getting in trouble with the police. Santangelo dealt with that in style with the very first book of the series, Retirement Can Be Murder.

“When Jim was suspected of murdering his retirement coach, Carol had to jump in and save him,” Santangelo says. “The police officer assigned to the case was their daughter’s grammar school boyfriend. The romance was rekindled, and the couple eventually married—in book three, Marriage Can Be Murder, Carol gets away with quite a lot because of her relationship with her son-in-law.”

If you think Santangelo keeps these mysteries on the light side, you’re right. In fact, humor is a thread that runs through every book.

“Carol has a smart mouth,” Santangelo says, “and she’s always making wisecracks. Jim gets in a few of his own, too. Each chapter heading is a joke of some kind. For instance, in Retirement Can Be Murder, the heading for Chapter One is ‘The hardest years of a marriage are the ones following the wedding.’ Who can argue with that?”

Santangelo says that readers continually send her more material, and some of it is hysterical. She uses the stories in the books, and always gives the source credit. Those funny anecdotes have helped her maintain a series that she says was a total surprise to her. It was her readers who turned what she thought would be a stand-alone into a series.

“After the success of book one, I began to hear from so many readers who wanted to know what happened to Jim and Carol next? He’s finally retired, so now what are they up to?” she says. “So I wrote Moving Can Be Murder, which was about them deciding to put their house on the market and downsizing. Readers tell me I’m writing about their own lives, not just Carol and Jim’s. Except, of course, for that one dead body.”

Santangelo admits she sometimes ends a book with a little teaser or question about what could happen in the next book, but nothing very specific because she likes each book to be a surprise to her when she’s writing it. But it should be no surprise to you that DIETING CAN BE MURDER is a fun read. Give it a try. 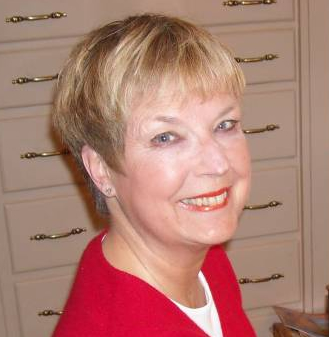 Susan Santangelo is the author of the best-selling Baby Boomer mystery series, which follows a typical boomer couple, Carol and Jim Andrews, as they navigate their way along life’s bumpy road into their twilight years. Susan is a member of Sisters in Crime, International Thriller Writers, and the Cape Cod Writers Center. She divides her time between Cape Cod, MA and the Gulf Coast of Florida, and shares her life with her husband, Joe, and two spoiled English Cocker Spaniels, Boomer and Lilly. Boomer also serves as the model for the books’ front covers, and Lilly is pictured on the back cover of DIETING CAN BE MURDER, the seventh title in the series.

To learn more about Susan and the Baby Boomer Mystery Series, please visit her website.