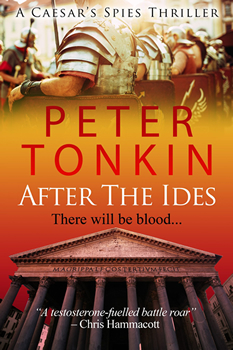 Veteran author Peter Tonkin has written a number of books, thanks in part to his hard-driving writing schedule. (If you want some motivation as an author, follow Peter on Facebook and try to keep up with the pages written that he posts daily.) His most recent novel is AFTER THE IDES: CAESER’S SPIES THRILLER BOOK 2, set in ancient Rome in the wake of Julius Caesar’s assassination.

This busy writer, retired teacher, and world traveller took some time out recently to answer some questions about Romans, research, and writing in general.

Thrillers such as yours require a tremendous amount of research to make them plausible. What fact did you discover in your research that stood out for you?

It’s difficult to pin down just one.  I love the fact that Artemidorus really gave Caesar a list of his murderers on the way into the fatal Senate meeting.  That Antistius the physician carried out on Caesar’s body the first recorded post mortem in history.  And that Antony’s wife Fulvia drove pins (and a stylus?) through Cicero’s tongue when his head was spiked in the Forum 22 months later – because of the terrible damage his speeches had done to her husband, her family and their fortunes in the interim.

As a writer, how do you get the voice right for characters who lived thousands of years ago?

“Right” is not really the correct term.  I try and make them credible and convincing.  As Lindsey Davis said when discussing her brilliant Falco novels, it is the suspension of disbelief that’s important.  I love to get my facts right, including events, characters and relationships, so Antony has a particular ‘voice’ and Octavian another–extensions of their characterisation in my stories.  Reflections of their characters in history as presented by the most up-to-date research I can find.

If you could go back in time, would you ever choose to live during the Roman Empire era?

I think not.  I am far too happy in the 21st Century, though I obviously love looking back to Roman and Elizabethan times.  Furthermore, since my retirement from teaching, I have enjoyed travelling for research, having visited (during the last 12 months alone) Rome, Chester, Edinburgh, the Scottish Borders and the Isle of Man; and will be visiting the South of France during late August.  Not to mention spending two months on the Red Sea during February and June.  Travel like this was impossibly time-consuming during the eras I write about.  Widely travelled though they were, Antony, Octavian, Cicero and Artemidorus could never know the simple joy of getting out of bed in London and getting into bed in somewhere as far away as Egypt – later on the same day.

You have an accomplished career in publishing going back to the 1970s. Can you discuss some of the changes that you have seen in publishing?

For me personally, the greatest changes have come through computing.  I still possess my old Adler 45 typewriter, purchased with money from my first major commercial success but I couldn’t work without a word processor these days.  Especially as I can now just email electronic copies of my novels to my editors who email the proofs back to me.  The internet has revolutionised everything.  The most obvious changes really come through Amazon and similar websites.  When I started in the late 70’s, I had to go to libraries to do research.  Now I use the Internet.  If I wanted specific books I had to wait weeks for them to arrive at my local libraries.  Now I just buy them online and they arrive within the week by post.

Furthermore, since the dawn of e-publishing, everything has changed further still.  As a writer, especially of historical novels, I can download classic texts straight to my Kindle and then carry them all over the world with me.  Something the simple weight of the actual texts would clearly preclude.  And, of course, they are delivered within moments, not days or weeks.  Furthermore, e-publishing offers the opportunity of self-publishing and authors are embracing this facility increasingly successfully.

Of necessity, my historical novels require careful plotting, though this is often dictated by actual events.  Both The Ides and AFTER THE IDES tell the stories of what happened (almost hour by hour) during the murder of Caesar and its aftermath.  I am working on the third in the series (Cicero Dies!) at the moment and the plot itself will be dictated by the actual events that occurred between Antony’s decision to return to Rome after the death of Decimus Brutus Albinus and his spiking of Cicero’s head in the Forum.

But there will also be a strongly organic element dictated by the characters themselves.  Antony, Octavian, Cicero and the sadistic Minucius Basilus all have parts to play – as do Artemidorus, Enobarbus, Puella, Cyanea.  And as they are all ‘real’ except for the last two characters, I need to make sure that I choose relevant and exciting aspects of their recorded histories for my books.  An example of this in AFTER THE IDES is the little-known attempt by Myrtillus to assassinate Antony – for which Octavian was blamed and which led to the assassin’s ejection from the Tarpean Rock.  Beneath which I have stood, making notes.  As I have stood on the spot where recent archaeology suggests that Caesar himself died.

I like routines and work best while following one.  My usual routine is:  Up at 6 am and downstairs in gym kit by 6:15.  Email, twitter (tweet) & Facebook (post) check online newspapers.  7 am – 8 am workout (at home) 30 minutes rowing machine, 15 minutes weights etc, 15 minutes exercise bike.  Dress for day.  8 am 0 noon, work on latest book in my study where many of my research books are shelved.  Though I always have Google and Wikipedia up while I type on my computer for ease and speed of reference as I double-check everything.  I find both sources of information inexhaustible and irreplaceable.  While working, I listen to classical music on my headphones.  12 pm – 12.30 pm I prepare and eat light lunch.  1 pm – 5 pm work on book.  5 pm, prepare dinner as I print out the day’s writing.  6:30 pm dinner & family time.  7.30 – 8 pm up to sitting room.  Watch TV.  9 pm – 10 pm bed.

Peter Tonkin has worked as a teacher and writer for more than 40 years. Retired from teaching now he concentrates on Roman spy stories and Elizabethan murder mysteries. After the Ides is the sequel to The Ides but can be read stand-alone. It is his 40th novel.