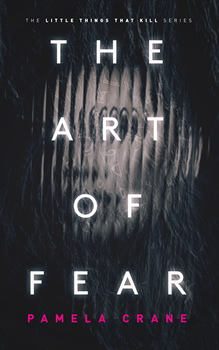 Award-winning author, Pamela Crane, juggles four kids, a book-editing career, rescuing horses, and a writing addiction. With that chaotic combination, she lives and writes on the edge. Her latest novel, THE ART OF FEAR, has been termed, “An intricate literary thriller that will twist your brain and leave you breathless.”

Ari Wilburn’s life ended long ago—the day she let her little sister die in a tragic accident. Crippled with self-blame and resented by her parents, Ari stumbles through life…and into an unlikely clue that casts doubt on whether the death was accidental. A psychological wreck, Ari joins a suicide support group where she meets Tina, a woman who escaped from the sex-trade—and has her own inner demons. Suspecting foul play in her father’s death, Tina drags Ari into a dangerous game with the killer. Faced with a murderous wake-up call, and desperate to salve her conscience, Ari’s investigation fuels the killer’s desire to see her dead.

THE ART OF FEAR delves deeply into the psyche of the characters. I caught up with Ms. Crane and dug for the motivation behind her compulsion to dissect the characters and bring them—especially her villains—to life. “I grew up a wallflower,” Crane says. “A shy girl who spent more time people watching than talking.” In observing others, she became fascinated with what makes people choose certain behaviors. “What makes people from similar backgrounds grow up with such severe differences in how they think? A child predator, for example. While the rest of the world groans and grimaces at what he finds appealing, somewhere along the line his urges became ‘normal’ for him. It’s those types of psychological influences that intrigue me, because behind every villain is a human.”

Society calls these predators, “monsters.”  Once upon a time, though, Crane says, they were babies cradled in someone’s arms. At what point did that baby transform into a monster? And where does that transformation end?

THE ART OF FEAR grew from the question—what if a killer married and had children? This theme generated two intriguing trails. First, is the propensity genetic? Is becoming a sociopath an inherited trait? Second, are the children potential prey to their father’s cruelty? When does the mother admit she’s been blind to the true nature of her husband? What if she sees those same tendencies in her child?

In The Art of Fear, a young mother fears a generational curse is following her, a curse that corrupts her son and makes him evil. Could long-ago sin really turn her child into a villain? She thinks so. Fears so. Perhaps, Crane mused, the guilt over that sin influenced how she raised her child, messed him up. The pages of the story unfold, leaving the reader ultimately to decide—nature or nurture. Sociopaths are skilled at blending in, however, at playing the game of life. In THE ART OF FEAR, evil attracts evil. Evil breeds evil. “It’s a mother’s hardest dilemma to know how to fix the broken path she set her child on by feeding that evil.”

Ari’s new friend, Tina, brings a face and focus to the other horror present in THE ART OF FEAR. Ari stumbles upon the sex-trafficking ring when she meets Tina in a suicide support group. As Ari helps Tina through her recovery from the nightmare of sex trafficking, she finds a link between Tina and her own sister’s death. “The clues lead back to the same people responsible,” says Crane. “And Ari unravels a lot bigger mess than she ever expected to clean up.”

Researching the sex trade was the most difficult part of this novel for Crane. “The details around the sex-trafficking industry are based on a friend of mine’s real-life experiences,” she says. Sold by her own parents, then raised in a suburban neighborhood where her friend was starved, beaten, and raped into submission, just the thought of it “makes me hold my toddler’s hand a little tighter when we’re out.”

Her voice of compassion and determination continues. “It [sex-trafficking] could be happening next-door to you, so it’s our job to befriend others, to look for possible victims. The more involved we get, the more we can stop this. That’s how my friend escaped—through a nosy neighbor. And while she wears the scars of her past, she’s didn’t let it break her because someone cared enough to notice her pain.”

An undercover detective assists Ari’s investigation. Both are in the suicide support group, both need companionship, so the relationship begins as “a crush and a shared pain.” Had Ari known Tristan was a cop, however, she never would have dated him. Crane slyly adds, “Hooking up with a cop went against every grain in her body.  You’ll have to read the book to find out why.”  Fortunately for Ari, she gave the guy a chance. His work saving lives inspired her and led to her becoming a P.I.

Crane is hard at work on the next book in the Little Things That Kill series. Tina’s baby was sold on the black market when she was in the sex-trafficking ring, Crane reveals. At the top of Ari’s to-do list: Bring back Tina’s little girl. Ripping a child from the only family she’s ever known isn’t as easy as it sounds. Add in a killer linked to Ari’s past who wants to put an end to her PI career—and her life—and a new thriller is growing in The Death of Life. 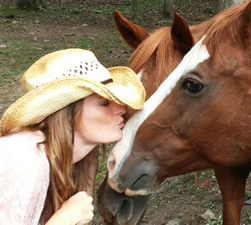 Pamela Crane is a professional juggler. Not the type of juggler who can toss flaming torches in the air, but a juggler of four kids, a writing addiction, a horse rescuer, and a book editor by trade. She lives on the edge (ask her Arabian horse about that—he’ll tell you all about their wild adventures while trying to train him!) and she writes on the edge. Her characters and plots are her escape from the real world of dirty diapers and cleaning horse stalls, and the masochist in her thrives off of hurting her characters to create an entertaining tale.

She is the author of several best-selling and award-winning thrillers. To pick up a copy of a FREE book and other prizes, or to find out more about her chaotic existence, visit her website.