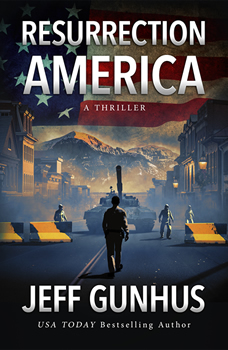 I believe the scariest thrillers are those rooted in fact. So despite its science-fiction spin, RESURRECTION AMERICA will chill any reader to the bone.

It all starts when helicopters and armored vehicles filled with soldiers in Hazmat suits quarantine the small mountain town of Resurrection, Colorado. The town follows martial law out of fear of an airborne virus, but Sheriff Rick Johnson isn’t buying the official version of events. Johnson is a good man who has managed to retain his sense of decency and morality after seeing the worst atrocities of war and, as the author tells us, he steps up to defend his community: “He clings to his small, failing town, understanding that it has become symbolic of his own ability to survive. He doesn’t view himself as a hero, but he’s a man of action who will do anything to save the people he cares about.”

As Johnson investigates, the cover story unravels and he discovers the military’s presence and the salvation they offer isn’t what it seems. A massive plot is underway, driven by a chilling super-patriot named Colonel Keefer.

“While Rick hopes for a return of community, Keefer plots to forcibly reshape the world to match his vision of America’s greatness, no matter how many people must die to make it a reality,” Gunhus says. “He personifies the danger of patriotism devolving into ultra-nationalism, reflecting, in my opinion, dangers we face today in our current politics.”

While rooted in the real, advancing technology involving brain linking, RESURRECTION AMERICA is a science fiction thriller. And while combining the genres, he certainly understands how they differ.

“I utilize thriller conventions of suspense, excitement, anxiety, red herrings, plot twists, and cliffhangers,” Gunhus says. “There is literally a massive ticking clock in the town square. However, hard science and futuristic technology are central to the plot and, as is often the case in sci-fi, it is a cautionary tale of how that technology might be misused for terrible purpose.”

Gunhus has published thrillers in the past, as well as horror novels, a fantasy series for middle graders, and even picture books for children. He admits that moving between genres might not be the best career advice, as it can sometimes confuse readers, but he loves it.

“For me, writing is an extension of the reading experience,” he says, “only as a writer I get to choose the adventure. I enjoy reading in different genres so I write in them too. Thankfully, the story usually tells me what it wants to be as I outline it, and I’ve gotten better over time at listening.  Ultimately, regardless of genre, the challenge is the same—develop interesting characters who face unreasonable amounts of conflict in ways that makes people turn the pages long after they ought to go to bed.”

And Gunhus knows how to do just that. Favorite scenes include the opening when the military first arrives in full bio-chem gear to seal off the town, the moment when the countdown clock—the deadline for the townspeople to receive an injection—reaches zero. But the author adds that “the one that I love, and that gets mentioned in most reviews, is the final chapter. It’s a denouement that shook me up as I wrote it and has been the part of the book readers always want to talk about.”

I won’t be sharing any spoilers here, but Gunhus thinks it’s the best ending he’s written. And while he writes primarily to entertain his readers, he admits that he enjoys novels that make him think.

He tries to give his readers that same experience. He doesn’t actually set out to teach anything, but he does ask a lot of questions and then work through them in the world he as created: “I saw so much fear of a fading America vocalized during the presidential election that I wondered what that looked like when taken to the extreme? What kind of leaders could that give rise to? What lengths would those leaders go to in order return America’s dominance? My answers to those questions hopefully will make people think about the risks of ultra-nationalism, especially in context of current events.”

Like all the best science fiction, RESURRECTION AMERICA reflects the society and the times in which it’s written. If you’re looking for a thinking-man’s thriller that’s still nonstop tension and suspense, this is the book for you. 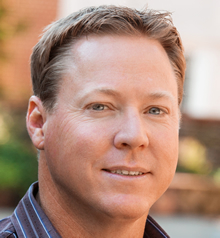 Jeff Gunhus is the USA TODAY bestselling author of thriller and horror novels for adults, a fantasy series for middle graders, and picture books for children. His novels have been translated into several languages, recognized as Foreword Reviews Book of the Year Finalists and reached the USA TODAY bestseller list.

Gone Without a Trace by Mary Torjussen