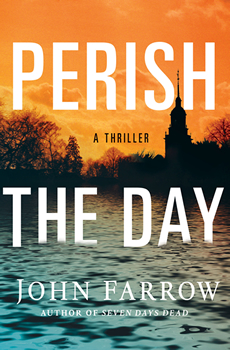 John Farrow is the pen name of Trevor Ferguson, a literary legend in his native country of Canada. Writing as John Farrow, he’s the author of the Storm Murders trilogy. PERISH THE DAY is the third in the trilogy, a novel about which Lee Child stated, “The best yet in one of my favorite series —I love Émile Cinq-Mars.”

PERISH THE DAY opens with a co-ed found murdered on campus. Coincidentally (or not), a college custodian is also dead. While an epic rainstorm assails the Holyoake, New Hampshire campus, a third crime scene is revealed: a professor, formerly a spy, is found shot in his home along with a mysterious note warning him to run. Coming up against campus secrets, Émile Cinq-Mars must quickly uncover the links between disparate groups before the next victim is selected for an elaborate initiation into murder.

I caught up with Farrow recently and asked him about the world—and protagonist—of PERISH THE DAY. The lead detective, Émile Cinq-Mars, appeared in two novels prior to the Storm Murder trilogy, one with him toiling in mid-career, and another with him as a young beat cop. In the Storm Murders, Cinq-Mars has retired from the force, although not, as it turns out, from investigating murder. Retirement has offered Cinq-Mars the freewheeling latitude of an amateur sleuth, yet provided the background and contacts of a professional investigator. While he was never a homicide detective—he still solved murders—his continued investigative activity in retirement isn’t a stretch.

A new life stage, however, has brought new challenges. His younger wife wants to change her career, and other questions dog them: Will they move? Will they remain a couple? The weather has also turned adverse. The “storms” of the Storm trilogy harness the atmosphere of the various locales: blizzards in Quebec, Louisiana hurricanes, storms at sea, a mountain tempest in New Hampshire.

Farrow says, “While the meteorological violence generates atmosphere, the weather also provides a means to enter various geographies and social landscapes at a time when chaos prevails and law enforcement is otherwise engaged. In PERISH THE DAY, what the future holds for our couple is coming to a head, and Cinq-Mars must make peace with continuing to investigate violent crime, retirement be damned.”

I questioned Farrow about setting PERISH THE DAY—and all the Storm Murders—in the United States when both he and his protagonist are Canadian. I learned the differences run deeper than mere geography. Cinq-Mars is French rather than English, which adds the unique culture of Quebec to the mixture.

“Being part of a linguistic minority on the continent has had its effect on Émile Cinq-Mars,” Farrow says. “He’s been formed by his culture and place, such as being a big-city cop with a rural background.”

Given Cinq-Mars’ years in law enforcement and his alliances within the both Canadian and U.S. organizations, the friendships provide opportunity to highlight differences.

Farrow went deeper into the aspects that set Cinq-Mars apart from a potential American counterpart.

“If [Cinq-Mars] were American, he’d probably be more cognizant of a racial divide,” Farrow says. “He’d probably have a greater affinity for weapons. He might have been more upwardly mobile, or more embattled, rather than being content with his rank at every stage. He’d probably be less of a moral crusader, not that the U.S. has not had its share, but he may have come up against a fabric that was less yielding, more resistant to the charge of corruption. He may have been more politically astute, and less curmudgeonly, as being thorny is a sign of his intelligence, and in the American fabric he’d probably have utilized that intelligence for political advantage.”

Food for thought for all of us.

Farrow’s years of experience in writing crime fiction allows him to delve deeply into the relationships among law enforcement groups. Included in a meeting of politicians and top cops from national, provincial and Montreal police forces about proposed anti-gang legislation, for example, he was provided rare insights into the behind-the-scenes maneuvering between the agencies. During these meetings, in addition to imparting general crime-fighting advice, the police pushed to solicit more government funding, and expounded on the challenges of combating biker gangs and the Mafia.

As a novelist, Farrow held a unique position as observer and conscience. He could call out the cops when they became too self-serving, and at the same time, dramatize the nature of the crisis on the streets. “My participation was a privilege, obviously, and one I took to heart.”

The long meeting offered advantages for a novelist, giving Farrow insights into the conflicts within each group and their difficulties in working together. “Their allegiances to their own forces conflicts with their respect and admiration for one another, at times to the detriment of justice.”

These conflicts found their way into the Storm Murder trilogy. Before retiring, Cinq-Mars had an antagonistic relationship with police bureaucracies, particularly his own, while he also formed close bonds with officers in forces ranging from the Canadian Mounties to the US FBI. Those years of experience bred suspicion, and in some cases contempt, but enabled Cinq-Mars to reevaluate a first impression or a false idea. Learning to trusting another officer, quite possibly with a life, established a dramatic threshold worth exploring in fiction. “Conceits and jealousies, grievances and doubts need to be overcome if officers from different forces are to work together, and that fascinates me,” says Farrow. “Their issues play out on a personal level and become a test of character.”

PERISH THE DAY explores the university “world” —it’s faculty issues, fund-raising concerns, cultural interests of students, and political affiliations. I asked Farrow about this compelling setting and whether it contributed to the crime or reflected it. Farrow openly discussed the rape culture prevalent on too many university campuses—an integral element in the novel. “Faculty secrecy dovetails with faculty complicity, when the latter is involved [in the crime].” The other side of the coin is the impact on fundraising when the public image of the institution takes a hit.

In PERISH THE DAY, rape has escalated to murder. While the specific motivations for the crimes in the novel may be different, Farrow uses the compulsion of the university groups to work in secret and to cover up the tragedy to protect their public image. The novel’s events sharply illuminate the divide between student values and corporate/university/government interests.

Given his literary success under his given name, Trevor Ferguson, I asked about the decision to write these stories under a pen name. Farrow was remarkably open, bluntly admitting he wondered why New York publishers weren’t reading his books when they landed on their desks. He and his agent did some honest searching and realized his sales history was the culprit. “Great reviews, that’s what I was running on; poor sales, that’s what editors were voting on. Changing my name for a new genre put an end to prior judgment. I’d been put in a box, and the name change allowed me to bust that box apart.”

Readers can differentiate between the two “authors” or rather, the two genres. Bookstores place the Farrow books in the crime section; the Ferguson books in the literary section.

Farrow plans to continue with Émile Cinq-Mars in future novels, settling him down in Canada. He wants to explore both Cinq-Mars’ current circumstances and revisit tales from his protagonist’s past. “I was never persuaded to write [those stories] while wearing my literary cloak.” With a smile, he adds “After the Storm Murders trilogy, I’ll promise only that, by and large, the weather will improve.” 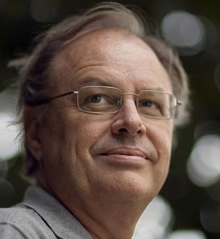 John Farrow is the pen name of Trevor Ferguson, a literary legend in his native Canada. He has written thirteen novels and four plays, all to extraordinary acclaim. He has been published around the world in seventeen countries, and is the author of the seminal crime novel, CITY OF ICE, revealing the work of the Hells Angels. John Farrow is the author of the previous two novels in the Storm Murders trilogy, The Storm Murders, and Seven Days Dead, of which PERISH THE DAY is the third.