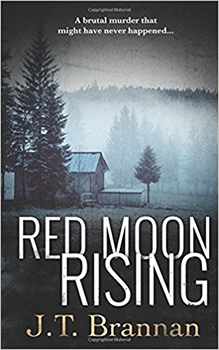 Except for a brief stint when he wanted to become a real-life Indiana Jones, J. T. Brannan knew he was going to be a writer early in life. Though a whip and fedora have never been required equipment for Brannan’s varied careers, his resume paints a picture of someone who is predisposed to that level of adventure. It’s hard to believe that someone who is a former national karate champion and nightclub bouncer, and who now serves as a martial arts instructor and member of the British Army Reserves, has the temperament to sit down and write fourteen novels.

But he does, and did. For his fifteenth publication, RED MOON RISING, ITW wanted to learn more.

What started you writing and what keeps your writing today?

I’ve wanted to write for a living since I was about six years old. The motivation is still the same: it is an outlet for my imagination, influenced by a steady diet of books.

You describe RED MOON RISING as a combination of serial killer, psychological, and supernatural thriller. Would you take us inside the challenge of combining subgenres?

There have been a lot of crime thrillers over the years, but not many that can be considered different from the conventional crime thriller, structurally at least. I constructed the serial killer part of RED MOON RISING as a conventionally plotted psychological thriller. The fun came with the supernatural part, which is where the structure gets turned on its head. It provides the reader with a genuinely new experience.

You seem to have some well-established series featuring male protagonists. Why switch to a woman for RED MOON RISING? What surprised you about writing a female lead?

Using a female protagonist helped me to keep the two streams separate. I thought it might make me write in a different way, and make it easier for me to keep myself from sliding back into the action-thriller genre. What surprised me about it was how natural it felt. I had some reservations at first, but it was actually quite refreshing.

Do you see Jessica Hudson as a hero or anti-hero? Again, what surprised you about her as she came to life on the page?

Jessica is a little bit of both, really. At heart, she is a fighter. This is a woman who feels fear, and who has been through a terrible experience. As the book progresses, she continues to go through yet more. But despite the fear, she refuses to give up. Quite often, she doubts herself, wonders if she’s capable of doing what needs to be done. I suppose the thing that surprised me about her is the same thing that surprises her—the inner strength she possesses that enables her to carry on, no matter what.

Tell us more about tachypsychia, which plays a role in your novel. What is it?

Tachypsychia is a neurological condition that affects the way a person experiences time, especially under moments of high stress. You’ve probably heard of people who’ve been in car crashes or gunfights who say, “Time seemed to slow down”, or “Everything happened so quickly, it was over before I knew it.” That is tachypsychia. It is something I have experienced myself, while working as a doorman/bouncer in nightclubs.

It seems like fiction has always been a Trojan horse for sneaking real-life issues into readers’ minds. What do you want your readers to think or feel after reading RED MOON RISING?

In addition to wanting people to understand the very real dangers of violent criminality, I would also be extremely happy if readers were left asking themselves questions about the very nature of reality and time, and our relationship to these things.

What do your fans have to look forward to in your next book?

My next novel is another entry in the Colt Ryder series, The Thousand Dollar Breakout. It sees our hero being hired to take down an underground fight club in San Quentin State Prison, organized and run by the wardens. It’s based on oft-heard rumors and reports about activities there.

Quite a few authors that influenced your writing. Is there one that stands out above the others as having a particularly profound impact?

Well, I love Tom Clancy and Eiji Yoshikawa, but probably the novel that has influenced me the most is FIRST BLOOD by David Morrell. I read it when I was about twelve, and it was just so exciting.

Probably the best advice I ever received was that structure is all-important, especially for people starting out as writers. If you don’t have a plan, if you don’t have a structure, then there is the possibility that the final product won’t make sense. Having a plan in place makes the writing much easier.

Well, for me, it’s the greatest job in the world. I’ve wanted to write for a living since being a little boy, and I would like to express my deep gratitude to my readers for making it all possible. I hope that you enjoy reading my books as much as I enjoy writing them. 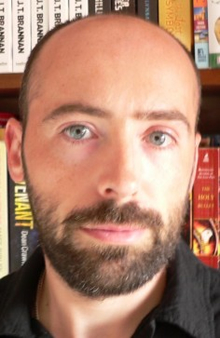 J.T. Brannan is the author of the Amazon bestselling political thriller series featuring Mark Cole (THE LONE PATRIOT, PLEDGE OF HONOR, NEVER SAY DIE, BEYOND ALL LIMITS, WHATEVER THE COST and STOP AT NOTHING), as well as the high-concept thrillers ORIGIN (translated into eight languages in over thirty territories) and EXTINCTION (his latest all-action novel from Headline Publishing), in addition to the sci-fi action short story DESTRUCTIVE THOUGHTS.

Currently serving in the British Army Reserves, he is a former national Karate champion and bouncer.

He now writes full-time, and teaches martial arts in Harrogate, in the North of England, where he lives with his wife and two young children.

He is currently working on the next novel in the bestselling Mark Cole series, as well as further books in the all-new Colt Ryder series.