Writing What You Love 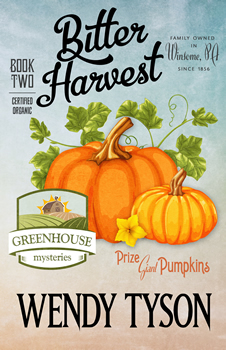 For many thriller writers, getting their characters out of a tight corner can be relatively straightforward. A dramatic shoot-out, a well-thrown grenade, or a vicious knife fight can get the author’s heroine or a hero to where they need to be. Such solutions aren’t usually available to those who write cozy mysteries. Theirs is a much gentler craft. But for anyone who hasn’t yet discovered the cozy, that doesn’t mean that the reader isn’t in for a gripping whodunit.

And a gripping whodunit is precisely what Wendy Tyson delivers with BITTER HARVEST, the second in her Greenhouse Mystery series. It’s a great cozy with all the required elements to satisfy the fan base. A likable, relatable amateur sleuth comes in the form of Megan Sawyer, an ex-lawyer who has returned to her roots to pursue a new career in organic farming. The fictional small town of Winsome in eastern Pennsylvania is presented with a richness that has the reader thinking “bad things couldn’t happen here!” The romantic element in Megan’s life is local veterinarian Denver Finn and there is much to discover about Megan’s family backstory, too. And yet bad things do happen, with the discovery of the dead body of Winsome’s pub owner in the run up to the town’s Oktoberfest celebration. As if that weren’t unsettling enough, Megan makes a troubling find of a chair placed in the woods where its unknown occupier has a clear view of her house. No spoilers of course, but worse is to come, and the building tension in this tightly-woven mystery makes for an engrossing read.

Yet cozy mysteries weren’t Tyson’s first genre. “My first novel was contemporary women’s fiction,’ she says. “It landed me an agent but not a publishing contract. Seeing my disappointment, my agent at the time told me to write what I love. I love crime fiction, from cozies to thrillers and everything in between. I’m attracted to the left brain, right brain balance of crime fiction—the emotional and creative elements, but also the logic-driven puzzle aspects. So I took that agent’s advice and began writing within the genre.” 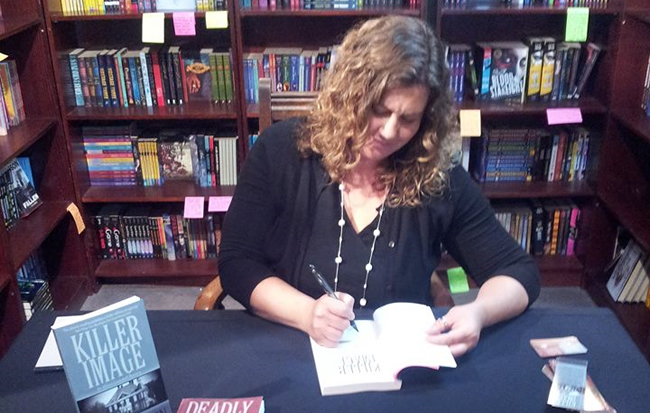 Wendy signing books at Murder By The Book in Houston, Texas.

Another tried and tested piece of advice for writers is to write what you know. Megan Sawyer’s fictional life is echoed by Tyson’s: she’s a lawyer who lives on a micro-farm outside of Philadelphia. The passion she has for the land and for farming is clear in the book and brings the fictional world of Winsome vividly to life. It’s a long-held passion. “My husband and I have long had an interest in sustainable living, organic food, and regenerative farming,” she explains. “We started gardening in earnest years back when the market crashed and my husband’s consulting work dried up temporarily. We were inspired by the small ‘kitchen gardens’ we saw in Europe, especially in countries like Slovenia and Macedonia. Often these gardens were located on tiny plots of land, but the output seemed tremendous. Thankfully the market—and my husband’s work prospects—eventually improved, but our passion for organic gardening only grew.” As for what she loves the most? “Watching the garden evolve from bare dirt/seedlings to a rich bounty of edibles. And picking and cooking the harvest—always a treat.”

Speaking of edibles, Megan’s business in running a café means that, happily, delicious food features. Even more happily: a lot. Tyson has even included one of the fictional cook Alvaro’s recipes. “The recipe included in the back of BITTER HARVEST, Alvaro’s Rustic Potatoes au Gratin, is a family favorite. It was inspired by our trips to the French Alps. I make it as a standalone dish, or sometimes serve it for breakfast alongside fresh fruit and scrambled eggs.” 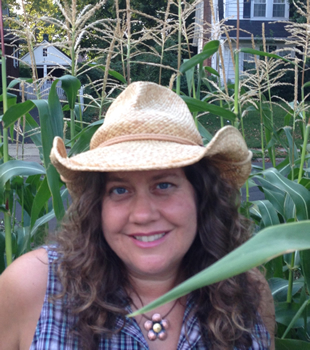 Wendy at her family’s micro-farm just outside of Philadelphia.

As mentioned earlier, BITTER HARVEST is book #2 in the Greenhouse Mystery series. I hadn’t read the first but that didn’t spoil my enjoyment at all as there was just enough backstory for me to get up speed. Tyson also has her Allison Campbell Mystery series. Again, it’s partly down to writing what you know. Tyson says she enjoys reading series and “I think that’s what initially inspired me to write them. There’s nothing quite as satisfying as sinking into a new novel in a beloved series—it’s like visiting with old friends. Writing a series allows me to focus on developing my characters over the course of each novel and over the course of the entire series.” But, she adds, “I think making each mystery truly different and unique while remaining true to the characters is critical, but can be challenging.”

Many aspects of the craft of writing can indeed be challenging. Every writer has (at least!) one aspect of the craft that they find most difficult to get right. Tyson is clear which one it is for her. “Interior monologue. I’ve gotten better over time, but I definitely have a tendency to include too much. My editors call me on it, thankfully.” She has these tips for other writers who might face the same headaches.  “When you’re editing, look for dense paragraphs of interior monologue. Ask yourself if every sentence is necessary. Is there redundancy? Does the passage move the story forward? Where possible, try to edit it down to one or two well-crafted sentences.”

And of course that story has to have a satisfying ending. “I guess I’ve always had justice issues,” says Tyson.  “I was the kid who complained that ‘life’s not fair,’ and who worried incessantly about the underdog. Real crime is gritty. People get hurt, bad guys get away with murder.  In crime fiction (at least my crime fiction), bad guys get their comeuppance. Justice prevails.”

Tyson’s many readers and fans will be pleased to hear that there’s plenty more justice on the way, too. “I just turned in Seeds of Revenge, Greenhouse Mystery #3, which comes out in late 2017. We have six books planned for the series, and book four, Rooted in Deceit, will be released in 2018. My fourth Allison Campbell Mystery, Fatal Façade, launches on June 13, 2017. 2017 promises to be a busy year!” 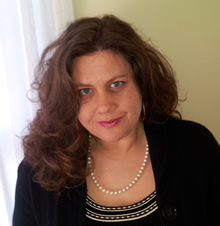 Wendy Tyson is an author, lawyer, and former therapist whose background has inspired her mysteries and thrillers. Wendy writes two series, the Allison Campbell Mystery Series and the Greenhouse Mystery Series. The first book in the Campbell Series, Killer Image, was named a 2014 best mystery for book clubs by Examiner.com. Wendy is a member of Sisters in Crime and International Thriller Writers, and she is a contributing editor for The Big Thrill and The Thrill Begins, International Thriller Writers’ online magazines. Wendy and her family live on a micro-farm outside of Philadelphia.