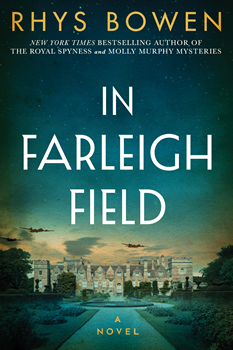 Rhys Bowen was born in England during World War II and was fascinated by the war for many years, but never got the chance to write about it until now. The author of several award-winning historical mystery series, she finally dove into the early 1940s with IN FARLEIGH FIELD, and couldn’t have been happier during every minute of research and plotting and character creation. “It was pure fun,” she says.

“I think if you don’t live in England, you don’t get the feel of what it was like to be in a country that was at war on the doorstep,” she says. “It’s the fact that that there were planes flying over and you’d never know if they’d drop a bomb and the fact that the Channel is only so wide and the Germans were poised to invade at any moment. It was a time of heightened everything, heightened emotions, and the last time in our world when we had a clear sense of good and evil.”

In the novel, a soldier with a failed parachute falls to his death on the estate owned by Lord Westerham, father of five daughters. Suspicions about the soldier draw the attention of MI5, and soon the family and their neighbors are falling under intense scrutiny. The vicar’s son, secretly an operative of MI5, investigates, and discovers that some aristocrats might have an agenda that could lose England the war.

Bowen says that during this time period, “People felt if we don’t stop Hitler, evil will swallow up the world. Everybody was willingly doing their share.  The fact that there was anybody in England who did not feel this way was very strange for me. I found out that there was a group of aristocrats who really wanted to aid Hitler, not because they thought Hitler was a good guy but because most of them were feeling that the longer the war went on, England couldn’t possibly win and the country would be destroyed. ‘If we make peace, our beautiful monuments will be saved.’ The other thing they thought was that Hitler did genuinely like the British, fellow Aryans, and they could be allies. I think these people misguidedly thought that if Hitler took over Britain, life would be just the same as always. And this to me was horrifying, and I’ve been waiting to put it into a book for a long time. But one of my series takes place in the 1930s and I’m still a good ways from World War II.  So I thought If I want to write this as a book, I’m going to have to write it now.” 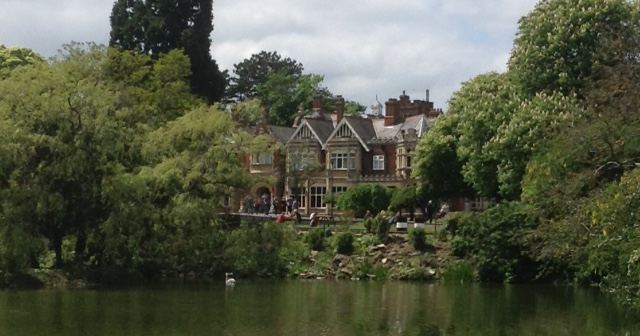 Bowen’s photo of Bletchley Park, during a research visit.

Bowen especially enjoyed writing about Bletchley Park, the secret site for English codebreakers during the war. “When you think of all those men there, the mathematicians, they were doing more to save the country than someone on the front lines most of the time, and yet they couldn’t say a thing about what they were doing. In something like 1998, they actually took away the Official Secrets Act, so the people at Bletchley Park and MI5 could talk about their work during the war. I thought that was sad because most of their parents had died never knowing what their children did. The parents died thinking the child was in a boring office job during the war, filing and making the tea and things. Never knowing what tremendous stress they were under, such as there was a convoy of ships coming and if they didn’t break the code that U-boats were going to get them.” 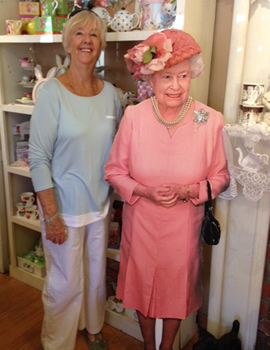 Bowen with a cutout of QE2

In IN FARLEIGH FIELD, a daughter of Lord Westerham works at Bletchley Park. “They actively recruited the women of the upper classes because they thought these women would do the right thing.” Bowen finds the lives of the aristocrats interesting, if a bit absurd. “Class has always been a huge thing in English society,” she says. “The upper class in England still really believe that God created them and then He rested. I grew up in a very middle class household. My dad ran a factory, my mother was a school principal. When I went to college, I met girls who had never got themselves a glass of water.”

Another person she met in college: the Queen. “She was so nice. Not stiff and formal. It was a small group, and she was relaxed and chatty, and she said, ‘I told Mummy this morning I’m going over to see my girls.’ And she said ‘Do give them my love.’ ”

Bowen’s husband comes from a background closer to the characters in the book than her own. “His family is very aristocratic and they had homes like this during the war. It was interesting to me: if you’re used to servants doing everything for you, if you’re used to Downton Abbey, what’s it like when suddenly the army takes over three-quarters of your house?  From your point of view, you’re really slumming it. ‘My God, we’ve only got one dining room.’ It’s interesting in the book to see how they all coped with it, and how the village coped with it.”

IN FARLEIGH FIELD travels beyond England, with another daughter of Lord Westerham living in Paris, and getting caught up in a dangerous sweep by the Germans of Resistance fighters. Bowen says she based the various sisters in the family on the real-life Mitford sisters. “They were so amazingly different. One was a huge fan of Hitler married to Oswald Mosley, a Fascist, and another one was a Communist. It showed me you could have a family of sisters all approaching the war in very different ways.” 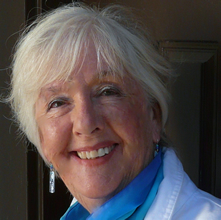 It was the opportunity to write a big, sweeping, epic thriller, jumping from country to country with a cast of brand new characters and the highest of stakes, that excited Bowen. There was a problem. Best known for her Molly Murphy series and her Lady Georgie series, this historical thriller was turned down by her publisher. So she found another one, Lake Union, interested in her standalones.

“Now I can explore things I never did before,” says Bowen. “It’s good to have a publisher say, ‘Run with it.’ ”