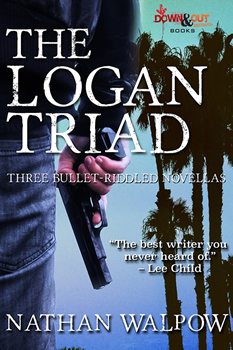 Admittedly, novellas are an unfamiliar storytelling platform for me. Positioned somewhere between the plot-driven short story and character-driven novel, novellas can run between 20,000 and 40,000 words (depending on your preferred literary resource). What seems to be common among sources researched for this story is the definition of novella: A work of fiction that is longer than a short story but shorter than a novel.

Armed with that deep insight, I jumped at the chance to talk to Nathan Walpow. His latest collection of three novellas, THE LOGAN TRIAD is scheduled for release in March. When asked why he favored the novella form, Walpow explained, “What I have found is that with novellas, the time commitment is not proportional to the length of the work. I can kick out a novella in about two weeks once I get started on it.”

For Walpow, the commitment to the novella runs deeper than mere efficiency, “If you’re built to write one kind of thing, and you try another, you may be successful if you’re that rare kind of writer. Otherwise, you’re better off writing what you can do well.”

Though published and promoted like a full-length novel, THE LOGAN TRIAD is a compilation of three novellas:

According to Walpow, he doesn’t choose themes or write stories that consciously reflect today’s headlines. At the same time, he does admit there is a strong message that seems to present itself in THE LOGAN TRIAD, “Anything that raises awareness for how crappy things can be for women and children, especially with so much human trafficking still going on…if a couple of people get a sense of that, it would be great.”

In addition to the three novellas that weave themselves together, the LOGAN TRIAD includes the short story Daughters (the story that motivated the creation of the Logan character) and Johnny and the Warehouse Women.

In talking with Walpow about Logan, I got a sense of a Batman-like character, but without the mask, wealth and cool gadgets. What you have left is a loner who’s not afraid to let his vigilante alter-ego call the shots, while working in the shadows and outside the system.

“He’s making his own way. Unlike a PI (private investigator) Logan initiates the work. He doesn’t have clients coming to him,” explained Walpow. “(Logan) says, ‘Here’s something that’s wrong. This person clearly battered this woman, but got off. I have to go teach him a lesson.’”

Despite the comparison, readers will find a depth to Logan that can’t be captured in comic book pages. One bit of proof is that Walpow’s revenge-seeking vigilante maintains a sense of karmic balance, “The lesson that he teaches is commensurate with the sin.” Walpow cited one other simple bit of evidence, “What surprised me about him (as he came to life on the page) was how accepting he was of the three young people who help him.”

Walpow’s collection of novellas and short stories seems, in a way, emblematic of Walpow the writer. Educated as a chemical engineer, Walpow’s vocations also include acting, improv comedy, writing and game show contestant (including a run as a five-time undefeated Jeopardy! champion). On their own, all seem like separate parts of well-lived life. But after only a few minutes of talking with Walpow, one realizes that they are all important facets that make up a writer that Lee Child called, “The best author you never heard of.”

The writing chops that earned Walpow this praise stretch beyond the Logan novellas, including a four book series featuring amateur detective Joe Portugal. In this series, Walpow created an opportunity to explore and hone his development of a protagonist), who also has to find his own way through a mystery.

However, with Logan, Walpow is stepping up his character development game, “Joe Portugal was basically an amateur sleuth who didn’t often deal with real bad guys. Logan rights some real wrongs and gets rid of some real bad guys.”

In coming year, readers are likely to see a similar evolution in Walpow as well. The next two items on the author’s “to do” list include a new installment in the Joe Portugal series as well as in the Logan series. Both of which are slated as full-length novels. 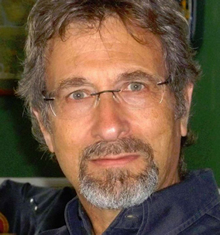 Nathan Walpow was born and raised in New York City, and went to college in the East Village in the late ’60s, where the most valuable thing he learned was how to sneak downstairs at Fillmore East. After four years in upstate New York and six in Oklahoma City, he arrived in Los Angeles in 1979.

The ’80s were his acting years; he was in a bunch of plays and an endless succession of improvisational comedy troupes, and received two semi-prestigious Drama-Logue awards. His fifteen minutes of fame came in 1985, when he was a five-times-undefeated champion on Jeopardy! He promptly squandered the prize money.

In 1992, more or less on a whim, Nathan took a short story class at UCLA Extension. He began kicking out stories, most of them science fiction or fantasy, and managed to sell some. Reading the complete works of Raymond Chandler prompted a switch to crime fiction. One fortuitous meeting with an agent at a writer’s conference later, he had a book deal. He was fifty years old when his first novel was published. So was Chandler. Read into this what you will.