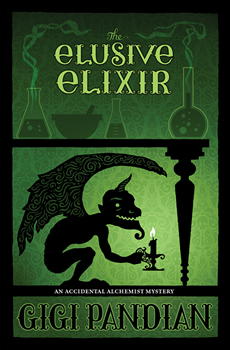 Dorian Robert-Houdin, the three-and-a-half-foot gargoyle chef who fancies himself a modern-day Poirot, is slowly turning into stone, and it’s up to Zoe Faust to unravel the alchemical secrets that can save him. From Portland to Paris, Zoe searches for the hidden knowledge she needs, but a cold case harkening back to 1942 throws her off course. With an ailing friend desperately trying to discover his elixir of life and a new romantic interest offering the first chance at love she’s had in nearly a century, Zoe is torn between a dangerous form of alchemy and her desire for a safer life. Library Journal gives the Accidental Alchemist series “High marks for a modern twist on an ancient practice,” including the third book in the series, THE ELUSIVE ELIXIR.

Gigi tells us the Accidental Alchemist mysteries begin when centuries-old alchemist Zoe Faust, a loner who’s been running from her past for decades, falls in love with Portland, Oregon. Zoe decides to stop running and stay, but her new friends become more important to her than she imagined. In the first book in the series, her defenses were up. In THE ELUSIVE ELIXIR, Zoe has so much more to lose because of the people she loves.

One of the challenges for amateur sleuth authors is to create a compelling reason for the protagonist to get involved—generally at great personal risk—in solving the crime. Gigi says,

“Though Zoe isn’t a detective, she’s on a quest to save the life of her best friend who’s dying an unnatural death because of a dangerous form of alchemy. That quest creates a secondary mystery, causing Zoe to get involved in solving crimes she would otherwise stay away from.”

Gigi avoids the “Cabot Cove” syndrome (people dying all around the sleuth) by having trouble find her rather than having Zoe seek it. “Since Zoe is a secret alchemist, her past catches up with her in Oregon. By bringing ancient alchemy to the modern world, I’m having fun melding historical alchemy parallels with a community feeling in present-day Portland.”

Gigi’s childhood spent following her cultural anthropologist parents around the world is why she became a writer. “I began traveling abroad with my parents when I was 10 years old,” she says. “My mom was headed to Scotland for the summer to do research, and she took me with her. I’m an only child, so I spent a lot of time on my own that summer, climbing on ruined castles, exploring cemeteries, and making up stories about this strange new world of the Scottish Highlands. That trip made a big impression on me and is why my first novel, Artifact, is set in Scotland.”

Setting—these far-flung destinations—impacts her stories, becoming as important as the characters in her books, creating the mood of the stories and impacting the plot as well. “I don’t write about a place unless I’ve spent time there, and each place I travel holds secrets that are perfect for creating unique clues in a mystery.”

Alchemy adds a new twist to the paranormal world. Gigi says, “I love researching these books. I now have so many books on alchemy and other research subjects that my husband has tried to get me to agree that for every new book that comes into our over-stuffed house, another one has to go. But as my piles of books remind me daily, that hasn’t happened.”

Alchemy is the process of turning the impure into the pure. That concept is why the idea of alchemy has historically applied to both those who were trying to turn lead into gold and those seeking to find the Elixir of Life to attain immortality. By the way, Gigi includes an Author’s Note in the back of her novel that explains what’s true history and what’s fiction as it relates to alchemy.

Gig began writing the first Accidental Alchemist novel while she was undergoing chemotherapy. She’d been diagnosed with breast cancer right after her 36th birthday. She says, “Ideas surrounding the Elixir of Life were swirling around my mind while I navigated the crazy world of a year of treatments for my aggressive cancer. That’s what pushed me to play with ideas of alchemy and started me on my path of buying alchemy books and planning trips that involved alchemy research.”

Next up for Gigi is a new story in the Jaya Jones Treasure Hunt mysteries about a historian who solves present-day crimes linked to treasures from India’s colonial history. Each of those books takes Jaya from her university in San Francisco to a different foreign destination (so far Scotland, India, France, and Italy.)

Gigi loves meeting readers both online and in person, so once she finishes writing a draft of the Jaya Jones novel, in January 2017 she’ll be doing a few West Coast bookstore events for THE ELUSIVE ELIXIR. 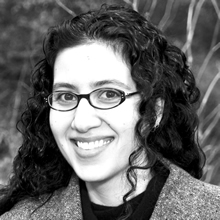 USA Today bestselling author Gigi Pandian spent her childhood being dragged around the world by her cultural anthropologist parents, and now lives outside San Francisco with her husband and a gargoyle who watches over the garden. Gigi writes the Jaya Jones Treasure Hunt mysteries, Accidental Alchemist mysteries, and locked-room mystery short stories. Gigi’s fiction has been awarded the Malice Domestic Grant and Lefty Awards, and been nominated for Macavity and Agatha Awards.