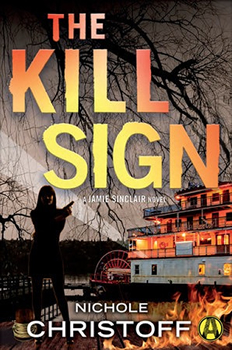 Before she began writing the Jamie Sinclair thrillers, Nichole Christoff was a broadcaster and a military spouse, living and working in an ever-changing succession of states and countries. Her experiences ranged from attending the birthday party of the King of Thailand and learning to make sushi from the chef to the Japanese Ambassador, to working on-air and behind the scenes in radio, TV, and the public relations industry.

Some of these experiences have helped to inform Christiff’s popular series featuring Jamie Sinclair, an army brat who grew up to be a security specialist and private eye. THE KILL SIGN, releasing this month, is Christoff’s fourth in the series and finds Jamie on the Mississippi Gulf Coast visiting her would-be boyfriend—a military police officer at a fictional military post—when a dirty bomb explodes on a river boat packed with military personnel.

Christoff took some time this month to talk to The Big Thrill about her new book, the progression of her main character, and what readers can expect from her next.

THE KILL SIGN is set in coastal Mississippi. You’re well-travelled and can pick from dozens or even hundreds of settings—why this one?

The Gulf Coast region is a cultural crossroads of sorts, and outside the gates of its military installations, it really is home to those infamous lingerie stores, antebellum plantation houses converted for other uses, and private hunting camps you’ll find in THE KILL SIGN. It’s the perfect place to let a thriller writer’s imagination run wild.

How has Jamie Sinclair changed in THE KILL SIGN, compared to the previous three books?

Throughout the series, Jamie has grown. She’s always been willing to take professional chances, especially in defense of those who can’t defend themselves. But in THE KILL SIGN, she’s confronted with taking personal risks, too. When Jamie visits the private investigator who taught her the tricks of her trade, she learns much more about his secrets than she bargained for. Along the way, Jamie ponders the questions some of us may ask ourselves at some point: How well do we know the people closest to us, and if we’re willing to go to great lengths to help them, how far is too far?

Jamie Sinclair is a private investigator and security specialist who has strong ties to the military in her personal life. Tell us about how you constructed this character, and why.

Even as a kid, I craved stories with a strong female protagonist in the driver’s seat, so that was a must-have from the get-go. As a military spouse, I would go to events at embassies and official residences, and among the members of the security teams there would be plenty of highly-trained men keeping us safe, and highly-trained women, too. I was always struck by these professionals’ deep-seated desire to take on what, traditionally, hasn’t always been considered a woman’s cup of tea. By the time I began work out the crime at the crux of my first Jamie Sinclair novel, The Kill List, I knew that for her to come out on top, she would need to embody the professional capabilities of these interesting women I’d met. I also knew there needed to be a vulnerability and even fallibility to Jamie—not because she’s a woman, but because that’s what it means to be human.

Jamie is a healthy single woman in a relationship, and she makes her living dealing with violent people. What is your approach to dealing with sex and violence in this series?

For better or worse, sex and violence are alike in one respect: they can be meaningful or they can be senseless. In any novel, the protagonist has the opportunity to interrupt the old pattern and nudge the needle from pointless to purposeful. I think Jamie’s at her best when she’s fighting that battle.

What kind of research do you perform for the Jamie Sinclair novels, and what techniques do you employ?

My research usually starts with the news. An interesting story always makes me ask: what if? From there, I often chat with retired military personnel, criminologists, or other specialists I’ve met through my career as a broadcaster and as a military spouse. Real world facts always form the basis of the novels I write, but when I can add an interesting twist and the human element, that’s when the story takes on a life of its own.

What sort of readers form the main audience for your Jamie Sinclair books? What do they take away from reading them?

Jamie Sinclair draws readers from all walks of life, but interestingly, a significant proportion of the readers who contact me are men who served in the Armed Forces during the Vietnam era. For those readers, I think they see something in Jamie they can relate to, like fulfilling your obligations and doing what you’ve committed to do, even when doing so is hard or unpopular. While circumstances dictate that Jamie has to be strong on the outside, she’s pretty soft on the inside, and many readers, both men and women, connect with that as well.

How has your career in broadcasting affected who you are as a novelist?

During your days as a TV news producer, you were stalked by a predator who mistook you for someone else. Please describe the incident and how you employed it in your fiction.

When I was a news producer, I worked with an anchorwoman who caught the eye of a stalker. He would phone the newsroom, hoping to speak to her, and his call would often end up routed to the workstation she and I shared. But calling wasn’t enough for him. One day, he mistook me for her while he was waiting to ambush her in the station’s parking lot. All’s well that ends well, but that incident later became the basis for the opening of my debut novel, The Kill List.

Why did you choose the thriller category for novels about Jamie Sinclair?

When I was a kid, my dad took my brother and me to the movies every Saturday. The two of them picked what films we’d see, so by the time I left for college, I’d seen every Superman-Sylvester Stallone-Die-Hard-Chuck Norris-Terminator-Die-Even-Harder-Than-Previously-Alien-Predator movie ever made. And I loved them all. Their action, pacing, and high stakes just made sense to me. Now, as I put my spin on fast-paced thrillers with high stakes, it’s kind of like being with my dad and brother again.

Do you have a philosophy or guiding principles for your writing?

I must write the kind of story I’d want to read. The protagonist has to be challenged on the inside, not just on the outside, and she has to tackle the tough questions we all face.

Name three novels that inspire you as a writer, and tell us why you find them inspirational.

My list would start with Raymond Chandler’s novels and run right through Sue Grafton’s Kinsey Millhone series. I love Tami Hoag’s Dark Horse because her protagonist never quits. I find Steve Hamilton’s The Lock Artist deeply touching and you can’t beat his Alex McKnight series for a setting that’s a character in itself. Dennis Lehane’s Gone, Baby, Gone is more than a mystery and it puts readers between a rock and a hard place in a very real way. These are books that do more than entertain. They tap into our common humanity somehow, and I can’t get enough of books like that.

What’s next for author Nichole Christoff?

The fifth Jamie Sinclair novel will hit the virtual bookshelves in late 2017 or early 2018, with more to follow. I’m also working on a new project that’s hush-hush right now. So, stay tuned, as they say.

What thought have you given to branching out into new characters or even a different genre?

Like nearly every writer I know, I’ve got a manuscript or two in my lower right desk drawer, and I confess at least one of them fits into another genre. Each and every one of them also features strong main characters, complex conflict, and questions about what’s just and true. And you just might see some of those characters in action soon. 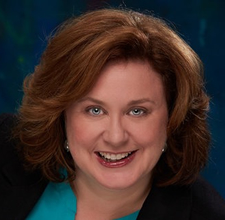 Nichole Christoff is a writer, broadcaster, and military spouse who owes Jane Austen, James Thurber, and Raymond Chandler for her taste in fiction. Nichole is also the award-winning author of The Kill List, The Kill Shot, and The Kill Box starring army brat and private-eye-turned-security-specialist, Jamie Sinclair. When she isn’t at her desk working on her latest novel, Nic is out in the woods with her ornery English Pointer.