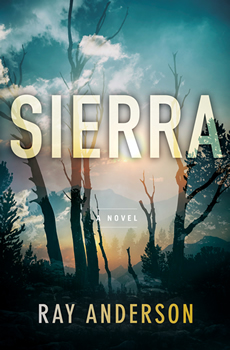 One would expect a thru-hike of the approximately 2,650 miles of the Pacific Crest Trail to present many challenges but the discovery of a dead body probably isn’t the first that springs to mind. Yet while the location may be real, we’re in the world of a Ray Anderson thriller and readers of his first hiking-based adventure, The Trail, will expect precisely that. Hero Karl Bergman (also known as Awol, of which more later) is on his second outing in SIERRA. This time, Awol’s coming up against a murdering drug cartel who are moving product from Mexico to Canada along the PCT.  The fast-moving plot sees Awol’s life on the line, along with that of his estranged son. Their only way out is to bring down the cartel’s operation.

While the exciting plot is of course fictional, hiking the Pacific Crest Trail is very much not. I wondered what made Anderson first decide to use this as a setting and plot device in his novel.  It turns out it’s from first-hand experience.

“My series covers major long-distance trails I’ve hiked,” he says. “My first book in the Awol series, The Trail, took place along the Appalachian Trail. In the hiking community this is the most popular long-distance trail in America and is usually hiked first. Next in popularity is probably the Pacific Crest Trail. So it was a given that book two of my series would involve the PCT.”

Bergman’s use of the alternative name of Awol is hiking related too, as Anderson explains.

“I don’t know how the convention of anonymity started, but all long-distance hikers go by trail names. Examples of trail names that I know are: Buzzard, Drifter, Song-bird, Dirty-bird, Grizzly, Angry Bear, and Vagabond. I never knew first and last names. Hikers come up with their own trail name and use that.” And Anderson has his own trail name, which is Hamlet. “I’m of Scandinavian descent, and my wife says I think too much.”

As for the fictional Bergman’s trail name, Anderson chose it to reflect the character’s past.

“AWOL in military lingo stands for Absent Without Leave. Awol is a former Army Captain with mental baggage from his Army tour in the Middle East. This trail name suits him. He’s also away from the woman he loves, and other things.”

Now, for those who run for cover in a heavy downpour, you could say Anderson isn’t really selling thru-hiking. He has Awol dehydrated, encountering snakes, discovering a tarantula on his stomach and more. As a reader, I loved experiencing all this on the page but I had to ask Anderson why people would ever put themselves through such hazards in real life.

“Perhaps many thru-hikers are a little nuts. I do it because of the acute sense of adventure, and I like the slow and steady accumulation of miles. Most hikers wonder what’s over the next hill, what’s around the next turn. Adventure! If you have the desire to complete a hike, and make the commitment, only injury will stop you.”

Naturally, Anderson hasn’t been stopped. His research for his novels is his passion and it shows.

“I have hiked the trails foot-by-foot, mile-by-mile. On the PCT in Yosemite National Park, I took a picture at dusk worthy of Ansel Adams. Five feet behind me was my tent. I didn’t take a picture of that, and no one believes that I was alone for the night there in my tent, in that awesome, majestic, scene.” He also relishes the challenge of bringing real life to the page. “The challenge for me is to bring the reader to a new sense of place. All trails are different, and I strive to give sufficient background and setting.”

And those readers will be pleased to hear there’s more to come from Awol—and the challenge of new trails.

“I’m revising my third novel which will be a thriller along the Continental Divide Trail (CDT). In particular, Awol meets more mayhem in the Rocky Mountains. My fourth novel in the series will take place along the Long Trail in Vermont. The LT is the oldest long-distance hiking trail in America.”

I’m sure many fans both established and new will be looking forward to hiking those trails of adventure with Ray Anderson and Awol—and keeping an eye out for those tarantulas. 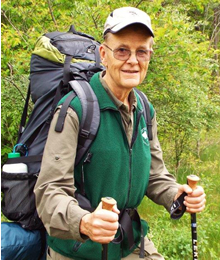 Ray Anderson began hiking in New Hampshire and has climbed all the 4,000-footers in New England. He’s thru-hiked the Appalachian Trail, hiked all of the Pacific Crest Trail, and hiked parts of the Continental Divide Trail. When not hiking or writing, he spends his time with family and friends in Massachusetts and Florida.