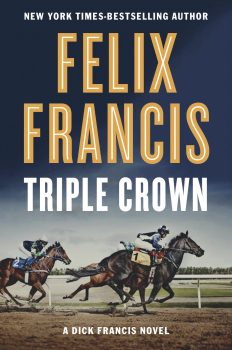 Thrillers set in the world of sport can be among the most exciting. But if that thriller is about the biggest prize in US horseracing and is penned by a writer with the surname Francis, then you know you’re on to a winner. And so it is with TRIPLE CROWN, the third outing for Felix Francis’s Jeff Hinkley.

Hinkley is an investigator for the British Horseracing Authority who has been seconded to the fictional US Federal Anti-Corruption in Sports Agency (FACSA). There’s a mole in FACSA who is tipping off those under suspicion of illegal practice, and Hinkley’s task is to find out who it is. But things take a lethal turn when three of the most favored Kentucky Derby horses fall sick and a FACSA raid linked to the Derby ends in murder. Hinkley goes undercover as a groom to try to find answers—and discovers far more than he bargained. His life is now on the line as those who seek one of the biggest prizes in world sport, the Triple Crown, will stop at nothing to win it. It’s a fast, gripping read and immerses the reader deep into the complex world of professional horseracing.

For those who don’t know, the Triple Crown consists of a trio of races—The Kentucky Derby, the Preakness Stakes and the Belmont Stakes— for three-year-old horses and it’s run in May and early June of each year. Only twelve horse have won in nearly a century. As Francis explains, “The Triple Crown is the absolute pinnacle of American horse racing. To win a Kentucky Derby is the stuff of dreams, to add the Preakness and the Belmont as well is beyond dreamland, it makes history and puts the horse into the ‘legend’ status.’”  Francis had been to three Kentucky Derbies and this provided his inspiration. “Having decided to set my 11th novel in the United States, it was the obvious event to include and the other two followed naturally.”

While we’re on the subject of legends, Felix Francis is the son of the late Dick Francis, the bestselling author of horseracing thrillers for more than 40 years who achieved worldwide sales of well over 60 million books before his death in 2010. Francis took over writing books under the Dick Francis brand and provides a fascinating personal account of how this came about.

“Back in 2005 my father’s literary agent asked me to lunch to tell me that we had a major problem—my father’s backlist was going to go out of print. Not that the 39 novels weren’t good enough, just that there had been no new novel for five years and people were forgetting. What we needed, the agent said, was a new novel, to stimulate backlist sales. Well, I said, you aren’t going to get one. My father was now 85 and my mother, who worked on the novels with him had died. The agent was actually asking me if I would give my permission for him to approach an existing crime writer to write a new ‘Dick Francis novel’ by so-and-so.”

An interesting proposition but Francis made a career-changing request of the agent. “I must have had a few glasses of red wine by then because I said, ‘Before you ask anyone else, I’d like to have a go.’ Instead of rolling his eyes he simply said, I’ll give you two months to write two chapters.’”

No pressure, then, even if Francis had been helping his father with research and plotting since his student days. But the result was 2006’s Under Orders—and it still had Dick Francis’s name on the cover. Sales were strong and it was critically acclaimed both in the UK and in the US. Dead Heat followed in 2007, with both father and son’s names on it. Since then there have been nine more, four in total with both names and six since with Felix Francis alone as author.

The publishers still like to put “A Dick Francis Novel” on the cover. Yet this is a source of pride for Francis as it continues his father’s legacy and one senses a close bond, too. “I am happy with that,” he says, “as I feel that my father is as much a part of my books and I consider myself a part of his. It now seems to me to be the most natural thing to continue writing the canon.”

And continuing he will be, with “More novels, as long as I keep well, people want to read them and my publishers are happy to publish. I am currently working on my next book but it is not a Jeff Hinkley. I have opted to write about a new character this time but that doesn’t mean I won’t go back to Jeff in the future. There is also the unfinished business of Sid Halley. I have done two of that series and left him in a cliff-hanger moment in his life at the end of Refusal. I’d better go back sometime to sort that out.”

The Francis family bond has also clearly passed down the love of horseracing. It goes without saying that the depiction of the races are as vivid as is possible without actually being there. But the novel also presents some of the darker and sobering issues facing the sport in a compelling plot.

There is of course a human side too. The often grim life of a professional groom in the US was really well portrayed. Francis made sure he got this right through his research. “I hope it’s pretty close to the reality. In the past I spent some time in the barns at Gulfstream Park in Florida and, for the book, Belmont Park in New York were very helpful, giving me access to the backside there and answering my never-ending questions. Without doubt, the grooms love the horses and their love of the love of the animals makes up for much of the hard work and dedication that the role demands. I wrote in the book that Jeff had discovered a new-found admiration for the humble groom. I did too.”

Yet sometimes the reality of horseracing is even more thrilling than fiction. “I tried to include all my favorite research snippets, albeit fleetingly in some cases, the best being the real-life win of Mine That Bird in the 2007 Kentucky Derby when he had been so tailed-off last for the first half of the race that he hadn’t even appeared in the TV shots. The TV race commentator was almost laughing at the end saying that it couldn’t be true. But it was. Racing can be so unpredictable, that’s why I love it.”

Unpredictability is something that horseracing and novel sales have in common. But with Felix Francis and TRIPLE CROWN on the card, I know where my money would be. 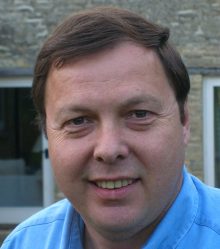 Felix Francis is a British New York Times bestselling author of mystery thrillers. He is the younger son of legendary thriller-writer, Dick Francis, and, since 2006, has taken over the writing of the ‘Dick Francis’ franchise. As Felix says, “It was as much a surprise to me as to everyone else,” when, after a suggestion by his father’s literary agent, Felix tried his hand at writing and found himself regularly on both the New York Times and London Times bestseller lists.

Triple Crown will be published in the fall of 2016 and is Felix’s 11th mystery novel. It is his first story set in the United States, although the first-person-narrative protagonist, Jeff Hinkley, is British and making his third appearance after Damage and Front Runner.

Felix’s previous occupations included teaching Advanced Level physics in England as well as being deputy chairman of a worldwide expedition and leadership training company in London. For a while in the 1990s he also ran a real estate business in Houston, Texas. He is now a full-time writer and he and his wife, Debbie, live in a four-hundred-year-old Manor House in rural England with their two Irish setters – who believe they are really in charge!