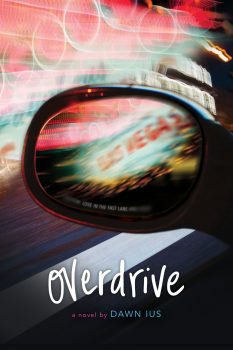 Some of us are suckers for a clever heist story like Ocean’s 11. Other people get psyched for a fast muscle car. And others still love a taut, on-the-clock thriller.

What if you’re Dawn Ius and you love all three? You combine them and write OVERDRIVE, a young adult car-heist thriller set in Las Vegas that guns the engine on Page One and never lets up. The novel’s unforgettable main character is Jules, aka Ghost, the teenager struggling in the foster-home system who can steal any car in Vegas, but whose tough exterior masks a protective love for her kid sister and a yearning to dance ballet.

In OVERDRIVE, Jules is bailed out of jail by a shadowy benefactor and given a choice: Lose her kid sister to the system, or steal seven of the rarest, most valuable muscle cars in the world—in seven weeks.

Ius says, “Seriously, I could watch Oceans 11 and Gone in 60 Seconds every day and not get bored. And although there are examples of teen heist books, I’d never read one involving cars. I just couldn’t figure out how to piece my ‘loves’ together. Then I saw a tweet by my awesome agent, Mandy Hubbard, who’d read an article about a 1967 Shelby GT 500 Mustang that once belonged to lead singer of The Doors Jim Morrison, and had been MIA for decades. Now I had my mystery. That car—also known as Eleanor in Gone in 60 Seconds—is my dream car. Like, I Google it at least once a week. With the mystery solidified, OVERDRIVE fast-tracked itself to being the book I had to write.”

Ius, a journalist based in Alberta, Canada, has written short stories in anthologies published by Leap Books and Vine Leaves Press where she’s also the development editor, and 14 educational graphic novels published by the Alberta Canola Producers Commission. Her first novel for Simon Pulse (Simon & Schuster) was Anne & Henry, a wicked smart reimaging of the epic 16th century love story of Anne Boleyn and Henry VIII as a turbulent high school romance between the new in school “bad girl” and the reigning jock prince.

Thrillers, however, are in her blood. “I was young—maybe 14—when I read John Saul’s Creature and I remember closing that book and thinking, ‘I need to write a thriller.’” Ius, deputy editor of The Big Thrill, took classes with authors of New York Times bestsellers. “I learned a lot about chapter endings by working with Gary Braver, for instance, and have always considered ‘pacing’ the one writing craft device I actually understand,” Ius says. “If anything, my first drafts tend to be too pace-y and I have to go back and fill in the other stuff. I loosely outlined OVERDRIVE—far less than I did in Anne & Henry—but the entire book was in my head by the time I finished writing Chapter 1. I literally had to slow myself down from skipping right to the heist scenes, which were incredibly fun to write.”

That explains the thriller itch. But what about the cars? In OVERDRIVE, Ius describes a muscle car with not just loving detail but authority. It turns out…she grew up with them.

“My stepdad had this beautiful old Camaro, which he called The Silver Bullet. I was desperate to drive it, so much so that I took my driver’s test on a manual transmission, perfecting the art of stick-shifting. I only drove that car once before my stepdad sold it, but it was enough. When I got my first professional career job as a journalist, I bought a Toyota Celica. It wasn’t an old muscle car but it was fast. I became that girl… the one racing people off the lights, or dragging my friends to the track for amateur race night. I was awful!”

For the intense character work on Jules and her sister, Ius learned more about the foster-care system, using her sister, a forensic psychologist, as a source. Another person she turned to was her husband, a former foster kid. “He shared some of his experiences that really formed some of the background for my characters, and also inspiration for the sense of hope that is (hopefully) woven through the story—a tough childhood doesn’t necessarily mean a life of obstacles, especially when you find people who provide unconditional love, support, and an unwavering belief in you.”

Next up for Ius, she’s returning to history, but a darker chapter than the court of Henry VIII (which of course turned plenty dark for Anne Boleyn!) She will take a contemporary young adult setting, and tell, in alternating points of view, the story of Lizzie Borden and Bridgette Sullivan. “It’s set in the Borden Bed & Breakfast in Fall River, Massachusetts,” says Ius. “The Borden hatchet murders are one of America’s oldest mysteries and most fascinating unsolved crimes. This book will really take me back to my thriller roots.” 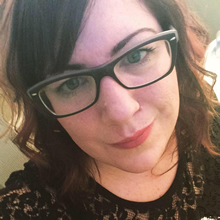 Dawn Ius is a short story author, novelist, screenwriter and professional editor. She is the cofounder and senior editor of Vine Leaves Literary Journal; managing editor of The International Thriller Writers (ITW) Association e-zine, The Big Thrill; and the author of the young adult novel Anne & Henry (Simon Pulse) and 13 educational graphic novels. When she’s not slaying fictional monsters, she can be found geeking out over things like fairy tales, Jack Bauer, Halloween, sports cars, and all things that go bump in the night. She lives in Alberta, Canada, with her husband, Jeff, and their giant dogs, an English Mastiff named Roarke and a St. Bernard called Charley.

To learn more about Dawn, please visit her website.