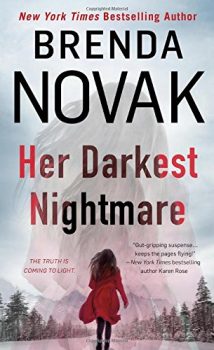 Brenda Novak’s new thriller, HER DARKEST NIGHTMARE, kicks off with the kind of scene that could close a book—the victim of a nightmarish rape and torture at the hands of her boyfriend escapes. Instead, this is only the beginning of Evelyn Talbot’s story.

In the deft hands of Novak’s extraordinary storytelling skill, the reader quickly understands how the ordeal has shaped the protagonist’s future. Now a doctor of psychology, Evelyn not only studies psychopaths, she has established a prison to hold the worst criminals—all in the name of science.

But of course, this doesn’t offer Evelyn the peace and sense of resolution she so desperately needs. Rather, it re-opens the past as it becomes terrifyingly apparent that not all murderers are locked inside her prison.

Novak took some time to chat with The Big Thrill this month to talk about her thrilling new release, including how she developed the emotionally complex character of her protagonist, Evelyn Talbot.

“I guess, in ways, I used my own drives and desires to create Evelyn,” she says. “I knew if I had been attacked the way she’d been attacked I would do everything I possibly could to find Jasper (achieve justice) and to figure out why he did what he did and how such a thing could be prevented in the future—and I would want what I learned to help others who are in a similar situation. (This is sort of based on how I reacted to my son’s Type 1 diagnosis, which led me to start my own charity and do so much fundraising.) Evelyn takes this same approach to rebuilding her life. She wants to make what she went through mean something, be a step toward improving the world for others.”

Hanover House is both a prison and research facility, is there a real-life equivalent?

There is no real-life equivalent that I’m aware of. I made this up because it’s exactly the type of facility I would want at my disposal if I were Evelyn and studying those sorts of people. (It also provides my series with an endless supply of villains!)

What would be the main challenge for such a place to exist?

Funding would probably be the biggest problem. Where to locate the facility and how the doctors and the corrections people would work together would be another challenge. Then there’d be the many differing philosophies and opinions by professionals. It’s hard to get everyone to agree on the scope of the problem and what should be done about it. As it says in the book, fads exist even in psychology, so it would depend on the pervasive thinking of the time.

The relationship between Amarok and Evelyn is extremely complex given their backgrounds.  Was this planned or did it grow from the story?

I knew this would be part of the conflict of the story—that Evelyn would have difficulty with intimacy because of the attack. It’s believable, because of her background, and, from a storyteller’s perspective, it gives them something to overcome as a couple.

Was the research on Alaska difficult?

I had to do most of my research online and via books, but I did get to visit there just this summer, which will help with future books in the series.

Will there be a third book in this series?

Yes, Hello Again will be out September 2017. Right now, we have four Evelyn Talbot books planned (in addition to the prequel Hanover House, which I published in advance of the series debut this September.) I can’t say much about Hello Again without giving away what happens at the end of HER DARKEST NIGHTMARE, so I’ll leave it there—by letting everyone know that there are more Evelyn Talbot books on the way.

As I write this, I receive an email from Booktrib.com which hails Brenda Novak as the “Queen of Romance.” With several series going, how do you keep the characters distinct in your mind?

My various small town contemporary romance series (or women’s fiction novels, for that matter) have a completely different tone and setting and deal with different kinds of people (not mental health professionals and criminals/psychopaths), so it’s not hard. I actually enjoy switching between the various sub-genres. Writing a romance novel that doesn’t contain so much suspense sort of gives me a break from the “darker” Evelyn Talbot series and vice versa. I enjoy changing things up.

What comes first, the plot or the characters? 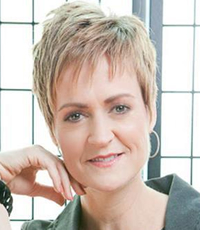 New York Times & USA Today Bestselling Author Brenda Novak is the author of more than fifty books. A five-time Rita nominee, she has won many awards, including the National Reader’s Choice, the Bookseller’s Best, the Book Buyer’s Best, the Daphne, and the Silver Bullet. She also runs Brenda Novak for the Cure, a charity to raise money for diabetes research (her youngest son has this disease). To date, she’s raised $2.5 million.