The Art of Wreaking Revenge 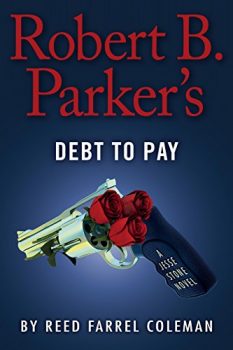 I had arranged to have Reed Farrel Coleman pick me up at the Ronkonkoma train station on Long Island. After all, this is where we first meet Reed’s ex-cop Gus Murphy in Where it Hurts (January 2016). I had taken the train to speak with Reed about the other series character he’s been working with, Robert B. Parker’s Jesse Stone, and I didn’t think either of us had the time or inclination to travel up to Boston to have this conversation half an hour or so from the fictional town of Paradise. So, Long Island it was. We’d talk—I hope—more about Gus some other day, but today was about Jesse Stone’s next adventure, ROBERT B. PARKER’S DEBT TO PAY.

One of the first things that stood out to me after reading the book was the length of the chapters—an average of about three-and-a-half pages each.

“Seven hundred and fifty to a thousand words,”Coleman says. “That’s the way Parker did it and the fans like it that way. I had to teach myself how to write like that, and if I do it right, each chapter is a story of its own. The shorter chapters build the story’s momentum, which is good because DEBT TO PAY is more of a thriller than mystery.”

So what’s the downside to shorter chapters?

“You get less time for exposition and less time for internal monologue. But I felt my main responsibility was to return to the tone of the first three Jesse books. I wanted them to be darker, more gritty, and I wanted to build up the body count. Fans of the series tend to conflate the books with the Tom Selleck movies, and I wanted to reestablish Parker’s original tone.

“I also felt the need to further develop the town of Paradise as a recognizable entity. I wanted it to be more of a character. I need setting in my stories and since a large percentage of this book takes place outside of Paradise—as opposed to the other Jesse Stone books—I wanted the feeling of the town to come through.”

Mr. Peepers—but don’t call him that—makes his return in this book. In fact, the title refers to Peepers’ desire for revenge against these small town cops who almost ended him. He’s a serial killer who wants to destroy the series characters we’re rooting for. Why do we still like him?

“First of all,”Coleman corrects, “he’s a hit man, not a serial killer. I like him because he is true to who he is, knows what he is, knows what he has to do and how to do it. These small town cops have shown him [Robert B. Parker’s Blind Spot] his own failings and that bothers him. He also demonstrates a degree of affection for a character he spends a lot of time threatening.

“Another thing about Peepers is that he’s terrorizing a woman who’s been rude to him, treated him like a non-person. It’s like that line from The Talking Heads’ ‘Psycho Killer’: ‘I hate people when they’re not polite.’ So does Peepers, and he acts on that. As humans, we all would love to get revenge on rude, impolite people. Not to that extent, of course.”

On a lighter note, Jesse still has the poster of Ozzie Smith on his wall, which Coleman has described as one way he maintains the connection to Robert B. Parker. Why does a grown man continue to have a poster of a retired baseball player?

“To Jesse, Ozzie Smith represents the personification of baseball,” he says. “He was the most artistic of shortstops; even if Jesse had made it to the majors as a shortstop, he never would have been as good as Ozzie. We understand Jesse more through his internal dialogues with the poster.”

I asked Reed whose poster he’d put on his wall. Who does he look up to?

“As a player, Keith Hernandez. We’re both left-handed first basemen. I love his quote, ‘Make contact first. Home runs are accidents.’ Defensively, he should be in the Hall of Fame, but his offensive numbers don’t add up. And,” Reed adds, “I understand he’s a big reader.”

“It was like riding with training wheels for this experience,” Reed says. “I had the harder part. I wrote the second half of the book with the characters Ken had created in the first half. So, it was kind of similar: I had to get into characters I did not create.”

How was writing with Bruen?

“Let’s just say—and make sure you put in that there was a smile on my face when I said this—that we were lucky we were 3,000 miles away from each other and not in the same room with a loaded handgun.”

Smile duly noted. What does crime fiction do better than other genres?

“It’s the perfect platform for writing about ethics and morality. The writers who do it best right now are Daniel Woodrell, Denis Lehane, and Megan Abbott.”

As a fellow writer—and a fan—I wondered if there was anything Coleman could tell me about future Jesse Stone novels. There was that smile again.

“In the next one,” he says, “Robert B. Parker’s The Hangman’s Sonnet, Jesse is going to meet Spenser.” (Ace Atkins who currently writes the Spenser novels, and Reed, share an editor at GP Putnam’s Sons, Christine Pepe, on the Parker stuff.) “I wrote the scene without Ace, but checked in with him beforehand.”

Speaking of which, something pretty fatal happens in the early pages of DEBT TO PAY to a very familiar character from both the Spenser and Jesse novels. Was Coleman worried about messing with the “Spenser/Jesse Bibles?”

“I cleared it with Ace and Christine, and since the Parker estate didn’t complain, I took that as having their tacit approval.”

“Good question,” Coleman says. I agree. After thinking about it for a bit, he says, “Jesse would order a Black Label, and mostly watch the other two and listen. Gus would be real comfortable with Jesse. He’d order a Bluepoint—which is very Long Island. Moe would ask for a Dewar’s and bust the other guys’ balls. When the conversation turns to law enforcement, Jesse would be the one who’s still unwavering in his belief in cops and justice. He’s a cop to the bone. Gus and Moe—both ex-cops—don’t share Jesse’s feelings; they’re more jaundiced about the law and those who are supposed to enforce it.”

On the way back to the Ronkonkoma station, we had some time to kill so Coleman drove the long way around to give me a little tour of Gus Murphy’s Long Island. We drove past a few oil and gas storage facilities, as well as MacArthur Airport in Islip. I commented on the lack of security at these places.

“You wanna worry about terrorism,” Coleman says. “This is what you should be worried about.”

Just what a writer needs—another writer telling him what to worry about.

Called a hard-boiled poet by NPR’s Maureen Corrigan, Reed Farrel Coleman is the New York Times bestselling author of Robert B. Parker’s Jesse Stone series. He is also the author of the Gus Murphy series for Putnam. He is a three-time recipient of the Shamus Award and a three-time Edgar Award nominee in three categories. He was also nominated for last year’s ITW Thrller Award for his short story “Feeding the Crocodile.” Reed has also won the Macavity, Audie, Barry, and Anthony Awards. He lives with his wife on Long Island.