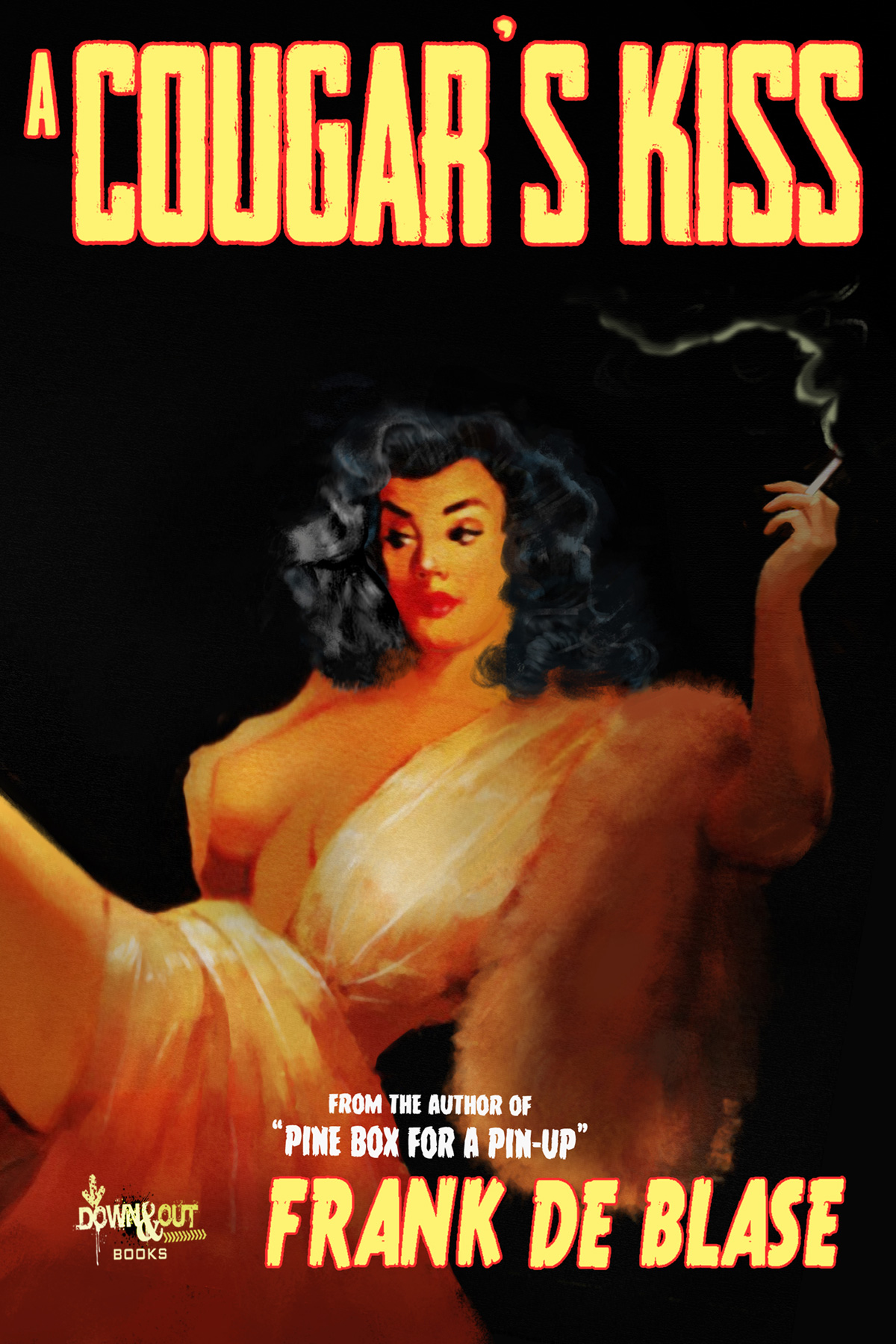 Frank De Blasé’s new novel, A COUGAR’S KISS, takes readers on a journey back to a gritty mid-20th century world of dark deeds and mean streets. It’s that territory of pulp and noir with dangerous mobsters and beautiful women who might be even more dangerous.

In this second adventure for his crime scene photographer Frankie Valentine, following Pine Box for a Pin-Up, the hero gets called back from Hollywood glamour photography to his more treacherous New York stomping grounds.

A body has turned up, that of a childhood friend who’s been missing 10 years. Soon Frankie finds himself dealing with a hidden stash of money and remnants from his past including the mother of a junkie stripper who once led him into manhood.

De Blase sat down recently to answer a few questions about the book for The Big Thrill.

A COUGAR’S KISS is set in 1960. What about that era made it intriguing as the setting for your series and this book in particular?

I’ve always dug everything retro/classic from that era; the music, the movies, the fashion. As a crime writer, I also get a kick out of showing readers that there were no good old days. Love, lust, greed, and murder are all universal themes and like catsup, they’re good everywhere. Also, the capers I create are solved psychologically with guts and instinct rather than science. It’s hard to be a liar in a DNA world.

How do you immerse yourself in that time period as you write? Any particular music that sets the tone? Do you watch old TV series?

The immersion is more in the story once it gets rolling. I’m already immersed in music and classic movies, and the patter of the parlance that pops up throughout.

What drew you to the New York location, taking Frankie out of California?

Rochester, New York is as much a character in the story as a setting. I grew up here. California on the other hand, Hollywood in particular, though a character itself, is also pre-conceived or rather pre-perceived as to its morality and glamour. The facts surrounding the goings on in A COUGAR’S KISS are a keen cocktail of fiction and my version of the truth that fits nicely in Upstate New York.

I’m guessing also that you’ve probably studied Arthur Fellig aka Weegee, who brought crime scene photography to the level of art. What have you learned from Weegee and his work that’s helped in creating the Frankie Valentine world?

I like Weegee in the way he found art in everyday tragedy, deciphered it and made it his own. Technically speaking, his contrast and tone were so stark yet so beautiful, you’d find yourself admiring a photo of a second rate hoodlum with his brains on the sidewalk as you would a busty beauty posing poolside.  He was always on the street with his ear to the ground. I love the fact that he had a darkroom in the trunk of his car. Brilliant. His influence is more on the desperate, noir side of my writing. There’s ugliness and beauty anywhere sex appeal and sleaze appeal collide.

What else helped Frankie come to life and start to breathe for you?

I know this may sound hokey, once I got into a groove with writing the book, he sort of took me where I wanted to go. I couldn’t force his development or where he went. But I tried. I honestly wanted to make him a little darker and sleazier without risking his humor, but he wouldn’t let me, the bastard.

The fifties and early sixties were a great time for crime fiction. What reading from the era have you done? Were you a fan of the Gold Medal paperbacks? Do you have a favorite author?

I’m a huge Gold Medal fan. I collect them as well as Pocket Books, Avon, Signet, Dell and so on. My favorite author from that era — besides the obvious — is Richard S. Prather and his P.I. Shell Scott — a wisenheimer, a womanizer and a cat that could teach Frankie Valentine a thing or two.

Are there any contemporary authors that have influenced you? If so, who best today captures the hard boiled era for you?

Charles Benoit brings the humor and twist to his stories with just the right amount of dark. Megan Abbott is the Queenpin of noir. For just plain old fashioned, great storytelling I turn to Walter Mosley. Andrew Vachsss doles out revenge generously in such bleak situations and settings. Chuck Palahniuk is an evil genius, Les Edgerton scares me, and James Ellroy is the king of it all.

Tell us a little about your writing life. When do you write? How many creative hours do you have in a day?

I write every day. That being said, you can’t force it. If it’s inside and wants out, you’d better let it out or your head may very well explode. I eat when I’m hungry, drink when I’m thirsty, scratch when I itch, click the shutter when her top comes off, and I write whenever the urge hits.

Summer is here and all Big Thrill authors are being asked this this month. When the summer weather beckons, what strategies do you use to keep your “butt glued to the chair?”

See above. Besides, who says you can’t write outside?

What’s next, and how long do you plan to keep Frankie on the job?

I have a few stand alones brewing that are a whole lot darker than the Frankie Valentine stuff.  But I have some Valentine stories waiting in the wings as well. And though his adventures are classified as pulp noir, I think he’s a likeable character. I have no intention of retiring him or killing him off. 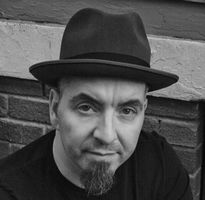 Frank De Blase likes the twist in the plot and the twist of the knife. He takes delight in chaos, entropy, and the wrong turns his characters make. His stories are pure pulp noir told in a language that is alliterated, obliterated, and visceral. He’s madly in love with the femme fatale. De Blase writes as a music critic every week for Rochester City Newspaper, contributes frequently to Crimespree Magazine, writes a monthly column for Skin & Ink Magazine, and photographs pin-up models for several men’s magazines. He likes to sing the blues.

A Cougar’s Kiss is De Blase’s second book in the Frankie Valentine series and his third book for Down & Out Books. He lives is Rochester, New York, with his wife, Deborah and two cats, Rocco and Dixie. To learn more, please visit his website.