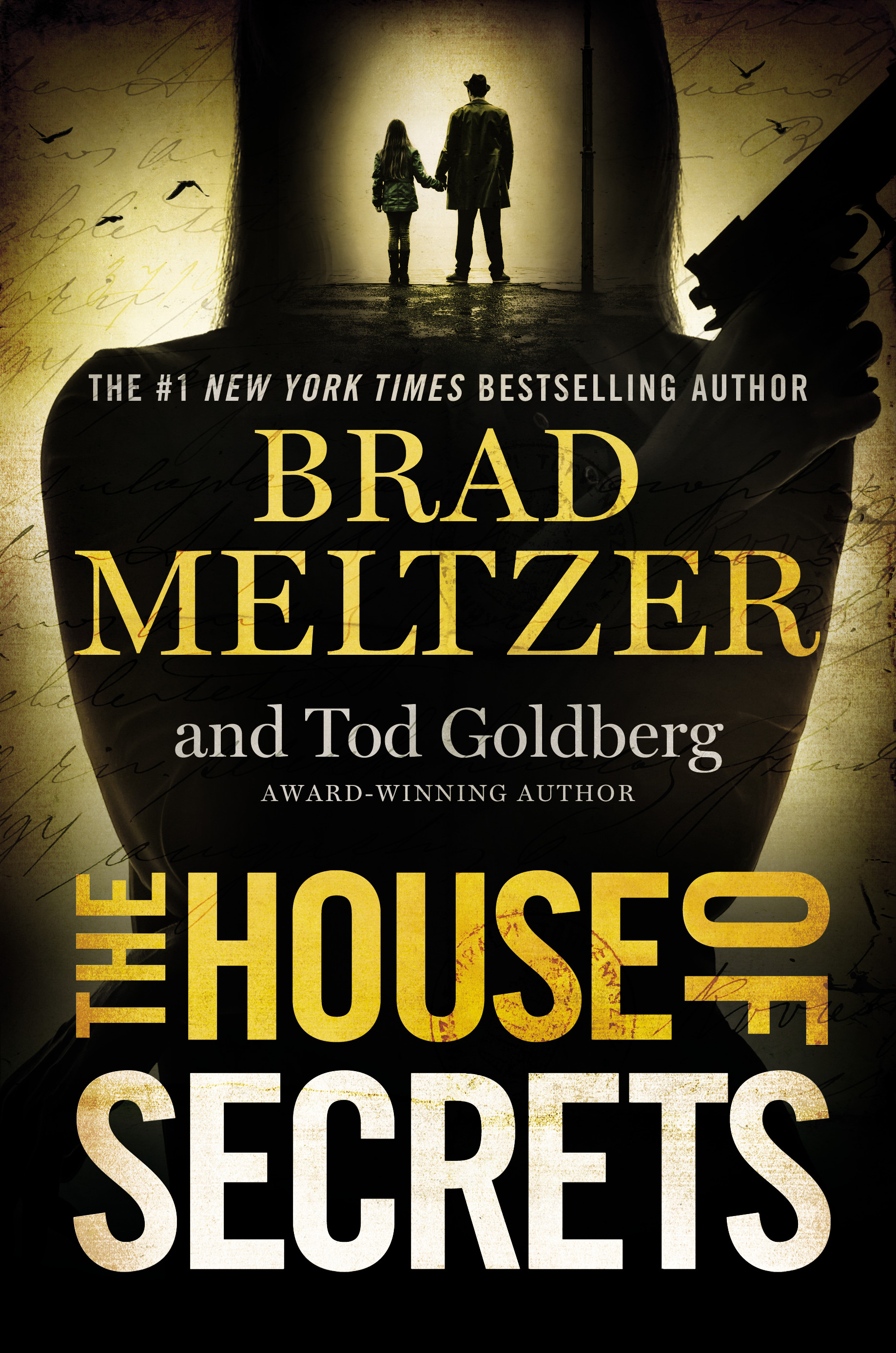 Brad Meltzer writes carefully crafted, high-stakes thrillers loaded with secret history.  So he’s delivering a hot story to the thriller crowd while making legions of nerds very, very happy. (Their fact-checks on the Internet while reading Meltzer’s books often lead to loud exclamations of “He was right about that!?”) While not writing his bestselling novels, Meltzer also crafts nonfiction for adults and children and hosts History Channel shows. Oh, and he writes comic books.

Meltzer’s 2015 thriller, The President’s Shadow, featuring brilliant National Archivist Beecher White, was the third in a successful series. His latest book, THE HOUSE OF SECRETS, co-written with Tod Goldberg, introduces a new kind of main character for Meltzer: Hazel Nash. When she was six, her father taught her that mysteries need to be solved. Hazel’s father is Jack Nash, the host of America’s favorite conspiracy TV show, “The House of Secrets.” Even as a child, she loved hearing her dad’s tall tales, especially the one about a leather book belonging to Benedict Arnold that was hidden in a corpse. Now, years later, Hazel wakes up in the hospital and remembers nothing, not even her name.

Meltzer took some time to catch up with The Big Thrill and talk career, history, and the care and feeding of readers.

This book, without giving anything away, revolves around Benedict Arnold, a fascinating man from history and, of course, a traitor. You’ve written about Thomas Jefferson and George Washington in the past, both great men. How long have you wanted to put Benedict Arnold in a thriller?

For years. Truly. The last moments between Benedict Arnold and George Washington are among the most heartbreaking in U.S. history. When Washington learns what’s happened, he’s devastated. They say it’s the only time the father of our country is ever seen crying. But the craziest part is what happens next:  Benedict Arnold writes to George Washington and asks his old friend for three things: 1) To protect Arnold’s wife Peggy, who everyone now wants to hang too. 2) He tells Washington that all of the commander’s aides are innocent and have nothing to do with Arnold’s treason. And 3), in one of the oddest requests a person could make in such a moment, Benedict Arnold asks that his clothes and baggage be sent to him.

Think about it. Benedict Arnold has just put a knife in the back of his best friend, become one of the most hated men since Judas, has basically abandoned his life, and his wife is in danger of being murdered—and what does he ask for?  He wants his luggage. He even says he’ll pay for the expense of sending it. And for some reason, Washington obliges. It’s a moment no one can explain: Washington hates this man. He spends the rest of the war hunting him and calling for his death. So why in God’s name does he send Benedict Arnold a final care package? And what’s in this so-called luggage? To this day, no one knows the answer. As for my theory, it’s in THE HOUSE OF SECRETS, of course. (How’s that for a tease?) 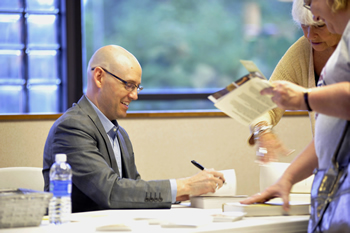 I saw what you did there. Hazel Nash is a far cry from Beecher White. She’s a complicated protagonist, very interesting, and I wonder if you were experimenting with her likability in the first part of the book?

Our goal was to create a story where the true mystery was the character herself. In Chapter 1, Hazel wakes up with no emotional connections to her old life. She doesn’t know where her scars come from, doesn’t know where she got those guns in her apartment. And the most thrilling part, for us, was the idea that the more she digs into her life, the less she likes who she was. Part of that was letting the reader know that she has a past she’s not proud of. And to me, that’s what makes her interesting. And complicated.

Is Hazel’s type of  brain injury based on reality, and if so, how did you research it?

We thought we made it up, but as we started the research, we realized that when it comes to brain injuries, you really can’t make up anything. The brain is that complicated. I have a friend who’s a top neurologist at Columbia. He’s the one who showed us exactly how the injury works. And how real it is. I’ll never forget that call where Tod and I were on the phone with him and he told us how it’d really work.

The antagonist in this novel continues your streak of incredibly strong villains. I can sometimes feel a real glee coming through in the sections devoted to the antagonist. Do you enjoy writing them?

Every hero is only as strong as the depth of their villain. I will say, Tod gave The Bear some of my favorite moments. He terrified me. Tod. And The Bear.

You were recruited by the Department of Homeland Security to help brainstorm different ways terrorists could attack the U.S. What’s it like to be good at coming up with ways that America’s enemies could kill us? What part of your brain does that come from?

Sadly, it comes naturally. Every thriller writer…we’re all paranoid. We spend our days killing people and taking over the world. So when the government called, I was almost relieved.

You’ve hosted a TV show on historical mysteries and there’s one in this book, not always depicted in a flattering way. What motivated you to include a TV series in the book?

When I started hosting our conspiracy TV show Decoded, people began to invite me into government installations, into Ft. Knox, into meetings that I never thought I’d go to. Why? Because I had a TV show. And it made me realize: I’m a perfect spy. I can go anywhere and no one thinks twice about it. When someone has a theory on the true killer of Abraham Lincoln, or the whereabouts of George Washington’s stolen teeth (which really are gone), they don’t send that info to the White House. They send it to me (and Jesse Ventura). Sure, 98 percent of the letters are nuts. But two percent of them are right on the money.  And I knew: there’s a good story there. 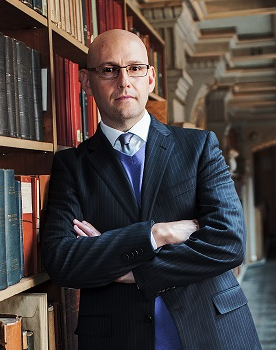 You have a co-writer on this book, Tod Goldberg, author of Gangsterland and the series Burn Notice. What made you move in this direction?

Because I had an idea I just couldn’t shake. I’d gotten that phone call to come help the U.S. Government. And then I’d heard this story about a secret letter that had been passed between Benedict Arnold and George Washington. And I thought, I have a great story to build around that. What I didn’t have was time. So after four years of thinking about it, I finally realized: If I don’t bring someone in, this idea will never see the light of day. From there, I decided I wanted to do the one thing I’d never seen before with a co-author: I wanted to write a book that would be better than what either writer could do alone. Lucky for me, I found the brilliant Tod Goldberg.

Publishing is going through a great deal of turmoil. How do you advise other authors to stay connected to their readers? It seems like some things that have helped authors in the past are not working so well now. What does work?

Only one thing has always worked: authenticity. Before there were web pages, I stayed connected to my readers by mail. Whether it’s Facebook, or Twitter, or whatever the next thing is, I still stay connected to those readers. I know their names, I know their kids. And they know me. So if you spend your time trying to sell them something, they’ll know. When I’ve tried to fake it, they know. They’re smarter than you, smarter than all of us. So give them the best thing of all: give them the real you. You won’t regret it.