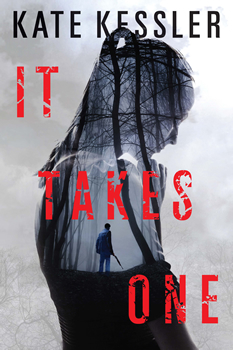 A former juvenile delinquent, Kate Kessler fell in love with thrillers at an early age, though it took her decades to finally try writing one.

IT TAKES ONE is the first in a new thriller series where a criminal psychologist uses her own dark past to assist law enforcement in catching dangerous killers. Years ago, Audrey Harte helped her best friend Maggie kill Maggie’s abusive father, and paid the price with a conviction and jail time. Now, home for the first time in years, Audrey’s the prime suspect in another murder—Maggie’s. To find the real killer, Audrey will have to remember what it was like to be one.

Kessler takes time this month to talk to The Big Thrill about the inspiration behind her thrilling new book.

IT TAKES ONE focuses on girls—children who kill—and violence. What drew you to this theme?

Unfortunately, I’ve known many women who had violence directed at them as girls, so my interest was planted at a young age. I grew up in a rural community. Oftentimes people view these bucolic little towns as something idyllic, peaceful and sleepy. But, when you isolate a place, and the people there have no real police or protective service on a daily basis, that can lead to people forming their own sense of justice or lawlessness.

I had a friend who was abused by her father. When she told me what he had done to her we both cried and hugged each other. We discussed ways to “get rid” of him. It was all moot as he’d already been arrested, but it made both of us feel like we had a little power. Anyway, we didn’t kill him, and he died an old man. I hadn’t thought of that story for years until a friend and I were discussing teenagers who commit crimes. I wondered what could happen if two young girls did kill an abuser. There can be such a dichotomy of love and hate in teen girl friendships that I feel doesn’t get talked about much, and I wanted to explore that. Girls are just as capable of violence as boys, but their motivation is usually personal, and usually heartbreaking.

Small town suspense—or to use the current buzz, domestic suspense—is extremely popular now.  How would you characterize your story? Psychological suspense? Twisted thriller? What do you see as the hallmark of that sub-genre?

I would definitely characterize It Takes One as a psychological story, and twisted as well. I think the hallmark of domestic suspense is the darkness we as humans carry inside us—that the surface is rarely a valid reflection of what lies beneath. The monster you need to worry about isn’t necessarily the stranger in the van, but the person sitting across from you at the dinner table.

It’s not all about the darkness of small town life. There’s a lot about friendship and family as well. If I had to pick a theme it would be that there are consequences for everything we do, even the good.

IT TAKES ONE is a debut novel—in this genre. Tell us about your publishing journey and change of focus.

It Takes One is my debut thriller, but I have been publishing for several years under different names in different genres. It wasn’t until I wrote this book that I finally felt like I had found my niche—it combines a little bit of everything I love to write. So, I’ve taken a roundabout way to get here. I liken it to taking the scenic route. The journey took a little bit longer, but there were some great things along the way.

Which authors do you most admire? Which do you think are most similar to the narrative and thematic approach of IT TAKES ONE?

Oh dear. This is always a hard question, because I always leave someone out! When I was very young—under 12—I read a lot of Stephen King and Sidney Sheldon. Sheldon definitely awoke my love of thrillers. I love Oscar Wilde, because he was able to see the light and the dark within people so clearly.

These days I really enjoy Sara Blaedel, Gillian Flynn (of course), Kate White… And whoever writes The Fall starring Gillian Anderson and Jamie Dornan — that is just some brilliant writing. I won’t presume to compare myself to Flynn, or Blaedel, or King, but I would like to think that the reason I appreciate their work is because there are elements of their stories that I try to put into my own.

How did you celebrate the publication of your novel?

I think I cried! To celebrate It Takes One hitting shelves, I plan to visit the book out in the wild, have a nice dinner, maybe a drink, and then get back to work on the next one because I’m on deadline.

Somebody once called my books “drivel.” That one stuck with me. The best advice I think was, “don’t have your characters think what they can come out and say.”

You can create so much more conflict within your book by having people say what’s on their mind rather than giving it a page of introspection. My advice to aspiring writers would be obviously to read a lot, but also to keep trying to improve, and keep learning the craft. Every author I know reaches a point in their current work where they think it’s terrible. I think if you lose that then you’ve become comfortable, and the best stories come from a place of discomfort.

Right now I am working on the third installment of the Audrey Harte series. Audrey is back in Edgeport, embroiled in another dark, small-town secret, and trying to decide what she wants to do with the rest of her life should she live that long.

Okay…enough with the business questions. How about some fun stuff? You know, just between the two of us.

Oh! I will pack some leggings, socks, a couple of long sweaters and comfortable boots, and jump on a plane to England.

I don’t think anything frightening has ever happened during research. I feel like I’ve missed out on something now. I’m one of those people who attract “strange,” so pretty much every time I leave the house something odd happens. I’m not quite sure what that says about me.

I did get pepper sprayed in New York once. I was walking behind two women who had an altercation, and one sprayed the other. The breeze in the subway tunnel carried the spray back to me. It burned! Though, in true author fashion, once it cleared away I was overjoyed at being able to write about the experience in an authentic voice. 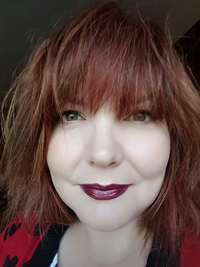 A former juvenile delinquent, Kate Kessler fell in love with thrillers at an early age, though it took her decades to finally try writing one. A USA Today best-seller under a different name, Kate is a full-time author who spends her days glamorously dressed in pajamas — liberally covered in cat fur — thinking of plausible ways to kill someone.

To learn more about Kate, please visit her website.