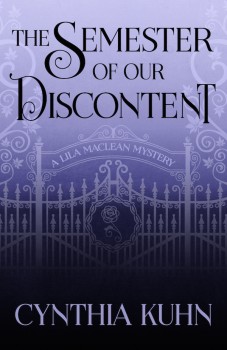 Brain twisting murder mysteries can take place just about any place, but if you’ve never read one set in the genteel setting of a university campus, here’s your chance. The halls of academia host horrible deaths in THE SEMESTER OF OUR DISCONTENT.

In the book, English professor Lila Maclean takes a new assignment at a prestigious university. It’s a great opportunity but turns dark when she finds the corpse of one of her fellow professors. What’s worse, all of her coworkers think Lila is either the killer, or is protecting him. The only way to clear her name is for her to find the killer. That’s certainly a challenge in a small private school with many unspoken codes. Luckily, Lila is not your average college prof.

“Having had a rather unorthodox upbringing as the daughter of a famous artist, she doesn’t feel as though she fits in,” Kuhn says. “And she definitely does not think of herself as a detective. But she’s good-hearted and stands up for what she believes in.”

Lila does have an impulse to speak out which is not appreciated by some of her colleagues. But it is a useful quality for a person suddenly thrust into the role of detective.

“She’s a reluctant amateur sleuth at first,” Kuhn says, “and she doesn’t have the kind of existing methods that, say, a PI would have. But as a professor, she’s been trained to find and interpret textual evidence, and she approaches her sleuthing the same way—trying to gather and make connections among different types of evidence, beginning with questions and moving into searches and observations of various kinds.”

From the outset, Lila encounters a lot of opposition at the university: “She’s in a showdown with her new boss, and she goes on to clash with other people in her department,” Kuhn says. “She finds herself at odds with the detective working the case, and she even comes up against a secret society whose purpose is unknown.”

The cultural setting of the novel sets it apart. Kuhn admits she’s addicted to academic mysteries, which tend to explore the seething cauldron of controversies found in any school environment, and what it takes to survive therein.

“Often times, readers are invited to experience academic life as a sort of contemporary comedy of manners,” Kuhn says. “And the campus functions as a small village does in traditional mysteries, with personalities and secrets ranging from the delightful to the horrifying.”

Kuhn doesn’t need to do a lot of research to get her characters right. She’s been working in academia for more than twenty years, so she has had the chance to observe people in that environment closely. But don’t think that just because she’s an English professor her work is purely literary. THE SEMESTER OF OUR DISCONTENT is a traditional mystery. Kuhn says she finds the “literary vs. genre fiction” debate to be odd. In fact, she explores this issue a bit in the book itself.

This mystery features several attacks on professors, attacks connected only by a curious symbol found at each crime scene. Follow Lila as she puts her scholarly skills to the test, gathering evidence to solve the puzzle before she becomes next victim. 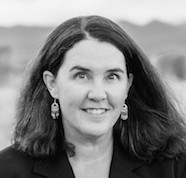 Cynthia Kuhn writes the Lila Maclean academic mystery series. Her poetry and fiction have appeared in McSweeney’s Quarterly Concern, Literary Mama, Copper Nickel, Prick of the Spindle, Cellar Door, The Edge, and other publications. She has also produced studies on contemporary gothic and dress/fashion in literature. Originally from upstate New York, Cynthia currently teaches English in Denver. In addition, she serves as president of Sisters in Crime-Colorado and blogs with Mysteristas.