An Unexpected Heroine From History 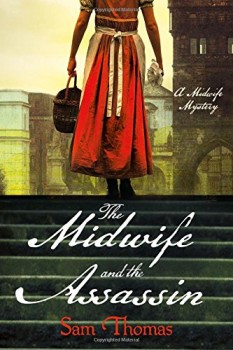 In his popular historical mystery series, Sam Thomas tells the story of Bridget Hodgson, a well-born widow in 17th century York. Specifically, the novels take place in the time of the English Civil War. Thomas discovered his protagonist while conducting research for his doctoral dissertation in York. In a will, he read the words: “I, Bridget Hodgson, of the City of York, midwife…” His depiction of her in the series is carefully drawn from historical research, though the murders she investigates are fictional. In an interview with The Big Thrill, he tells us more.

As an academic, you researched the lives of midwives in the early modern era. When did you have an “aha” moment and realize that a midwife would make an excellent protagonist for a historical mystery series?

Hmm, I’d never quite wondered that. Oddly enough, no! It’s because I came at the series from a somewhat different angle. I knew I wanted to write about midwives, but didn’t know what genre to choose? Straight historical? Historical thriller? Mystery? In the end, mystery seemed like a good idea, both from a practical and historical perspective.

First, in mysteries, you don’t have to worry as much about the plot, particularly where to start and end the story: You start with one dead body and you end with another dead body. (I don’t mean this as criticism: you could say the same thing about writing sonnets! You don’t have to wonder how many lines it will be, or what kind of meter you should use, but that doesn’t make Shakespeare a hack.)

Second, it turns out that midwives were key figures in law enforcement in England, investigating crimes ranging from bastardy and rape to infanticide and witchcraft. They also knew all the community’s secrets: what more could you want in the protagonist in a mystery series?

Why did you select York as the English city you’d base most of the series in?

Again, that was a practical and historical decision. On the practical side, it was the city in England that I knew best, since I’d lived there for over half a year, and read extensively about its history for my doctoral thesis. (It also retains a lot of its medieval architecture, so it is possible to get a feel for the city just by walking around.)

More importantly, Bridget Hodgson – the protagonist of my novels – is based on a real midwife of the same name, who lived in York for decades. I wanted to stick as close to her experience as I could, at least for the first few books.

What made you decide to move the story to London with THE MIDWIFE AND THE ASSASSIN?

There were a few reasons for this. First, part of what makes historical fiction interesting is that it allows readers to see great events from the perspective of ordinary people. I wanted Bridget to witness the execution of Charles I in 1649, and that took place outside the Banqueting House in London. So off she went!

I also wanted to do it for the sake of the series. My job as an author is to put my protagonist in difficult situations and see how she gets out. This can be as obvious as fight scene, but it can also be more subtle. London in the 1650s saw the rise of truly radical political ideas, such as giving poor men (or even women!) the right to vote, and the extension of religious toleration to all English.

In many ways, Bridget is quite conservative, and I wanted to see how she would react to ideas that ran counter to everything she has believed in up to that point in her life. 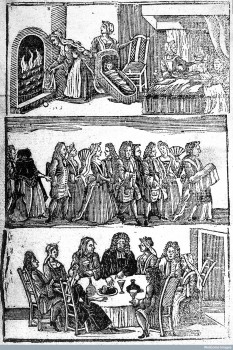 In my series I was drawn to the prospect of telling the story of a woman not usually written about–a Catholic novice at an enclosed order–and did that appeal to you as well, to acquaint readers with a woman not written about too often in historical novels?

To be honest, I never really thought about it, in part because when I wrote the book I wasn’t a big reader of historical fiction. (I was a full time historian, so when I read for pleasure, I wanted something more modern.) I chose a midwife simply because I wanted to write about a midwife! I’m just glad the market wasn’t already swamped.

As it happened, the timing couldn’t have been better: Call the Midwife was just hitting it big, and the natural childbirth movement was really coming into its own. It’s better to be lucky than good.

What is the biggest misconception people have about a 17th century midwife?

I think it’s the “myth of the midwife witch”: the idea that midwives were on the margins of society, and often tainted with the sin of witchcraft. This slander developed in the 18th and 19th centuries as doctors (male, of course) drove women out of the delivery room by accusing them of incompetence and superstition. During the Enlightenment, those were fighting words!

In fact, midwives were highly respected members of their community, often married to priests, and – as I mentioned – key to law enforcement. They were women who had power at a time when women weren’t sup[posed to have power, which is what makes them so awesome!

How do you decide which characters will continue through a series and do you ever feel you need to get rid of one or two as you go along?

It’s kind of a mix. Some characters I know I will keep. Every detective needs a sidekick, so getting rid of Martha Hawkins was never really on the table. And there are others whom I really grew attached to, so they stuck around simply due to my affection for them.

Others, though, are (to be blunt) expendable. In once case, I had no plans to get rid of a character, but as I was writing a fight scene I realized that he had to die. It was that spur of the moment! So I wrote his death, and then took a day to think about it.

And that was that.

On the other hand, moving the series to London gave me the opportunity to bring back several character from earlier books, which was a great deal of fun!

What are your techniques in bringing readers into the series in a later book? How do you engage them and prevent them from feeling they have to start at the beginning?

That’s the hardest thing about writing sequels. You don’t want to let the reader feel lost, but you also don’t want to give away too many details about earlier books in case they want to go back. (I remember reading a Kenzie and Gennearo novel by Dennis Lehane, and he (inexplicably!) summarizes the end of one or two of his earlier books, telling the reader whodunit, how he was caught, and how our heroes killed him. I never want to do that.)

As a rule, I tend to write more than I should and then pare it back to a single paragraph and no more. And no spoilers!

How do you work religious tensions of 17th century England into your books without it feeling like a history lesson?

I think the key is to connect it to character development. Religion was an emotional issue in the seventeenth century, and if my characters care deeply about the issues, so will my readers. It also helps to have a skeptic in the story (that’s Martha’s job!) so that Bridget has to explain herself aloud.

What kind of books do  you read for inspiration as opposed for research?

It really depends on what I’m trying to write at a given moment. My latest book (a standalone, currently out on submission) has some pretty intense battle scenes, and I wanted to figure out how to write violence well. That drew me back to Cormac McCarthy’s Blood Meridian. Even at my bloodiest, I don’t come within ten miles of his level of violence, but he writes it so beautifully I wanted to learn from him.

It is also true that much of my inspiration comes from my research. It’s not usually conscious, but as I dig into the social history of a period, pieces of my characters start coming together in surprising ways. A character I’d originally conceived as being male becomes female and Quaker, a Jewish constable is added to the story…

I never know which idea will be a keeper, so I gather them as I read, and see which pan out as I begin to write.

What’s next for you in your writing?

As I mentioned, I’ve got one book–a standalone set in colonial New England–out on submission right now. After that, I’m not quite sure. Either another in the midwife series, or a second set in colonial America. I’ll decide this spring! 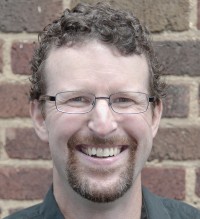 Sam Thomas has a PhD in history with a focus on Reformation England and recently leaped from the tenure track into a teaching position at a secondary school near Cleveland, Ohio.

To learn more about Sam, please visit his website.