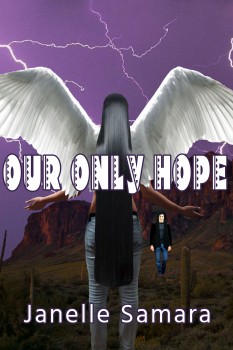 Janelle Samara’s debut, OUR ONLY HOPE, blends myth and legend. When a young Native American named Hope sprouts angel wings, her elders declare her the fulfillment of a prophesy, the savior of her tribe from a war that could end society. Doubting her ability to save anyone, she seeks help from Deema, a vampire. Life becomes further complicated when Hope discovers she’s pregnant with the vampire’s child. She worries she will not survive, especially when she hears a prophecy about a blood drinker who will distract her from her mission and turn her into a demon. Could the prophesy be referring to Deema and, if so, does she have the strength to give him up before the coming war destroys her people?

Samara spoke to The Big Thrill about her new book and writing in general.

OUR ONLY HOPE, labeled a supernatural thriller, centers around a Hopi end of the world legend. What drew you to this theme?

I was drawn by my great love for dystopian books. I chose the Hopi people simply because their name is so close to the central character, Hope. I made a point of not researching Native American myths and legends for this book so that I could create my own mythologies as necessary. I needed Hope to be earthy, from a culture steeped in ancient stories, and not be labeled as a wannabe or a hippie by critics for loving nature and being self-sufficient. I decided that having her be a Native American would fill all of my needs for her character. I wanted to honor the cultures of the First People of America by borrowing names of tribes and creating legends for them to fit into my novel.

Fantasy and other supernatural stories require significant world building. What was your inspiration for the world you built?

At the risk of sounding cliché…it began with a dream. I woke up one day and started to write about this woman who grew wings while she watched in her bathroom mirror. At first, I thought that it would perhaps end up being a short story. Two years, a lot of rewrites, and 150,000 words later, I knew I had to break it up into smaller books to make it a trilogy. I’m not sure who or what to credit with my inspiration other than the characters themselves. Once I start writing about someone, they take on a life and personality of their own.

Which authors do you most admire? Which do you think are most similar to the narrative and thematic approach of OUR ONLY HOPE?

My top three authors are all long dead—Sir Arthur Conan Doyle, Charles Dickens, and George Orwell. There are a dozen or so modern authors whose books I follow and love, but I’m not sure any of them are all that similar to how I write. I love a plethora of classics and find that I must watch my habit of mirroring their long, flowery sentence structures. I suppose if I had to choose authors to whom I would compare my writing it would be a mix between Lauren Kate and maybe a little Stephanie Meyer. I think Hope is a bit like Luce—from the FALLEN series—in that she is full of doubt and lacks the knowledge she needs to make the right choices because she cannot remember her previous incarnations.

OUR ONLY HOPE is your debut. Tell us about your journey to becoming a published author.

I’ve been a writer my whole life. By third grade, I’d had a poem published in the local newspaper. I can still remember how upset I was after an editor ruined a haiku that I’d written.  I’d. My mother told me that editors would be the bane of my existence if I continued to write for others to read, so I stopped.

For over twenty years, I refused to submit my work for publication. Then a friend rekindled my love for modern fiction. She suggested a few books, which I enjoyed. Inspired for the first time in a long time, I wrote a 250,000-word fanfic. Delving so deeply into a world someone else had created made me want to create my own. After several starts and stops in various supernatural/dystopian worlds, I dreamt of Hope and this imagined woman became my muse. After a couple of years I sent it to Black Opal Books.

What is the best advice — and harshest criticism — you’ve received as an author? And what might you say to aspiring writers?

The best advice I’ve been given is also the same advice I’d give to aspiring writers—to never give up and to keep writing. Also, listen to your editors because it’s their job to know what they’re talking about. Nothing will be enjoyed by everyone, but everyone will enjoy something. That also goes hand-in-hand with my harshest criticism. One publisher told me that no one would ever buy my book because no one wants to read about a non-Christian “angel” who smokes cannabis. Yet, now that my book is out, I’ve spoken with many people who seem fascinated by the concept of an angel who subscribes to none of the monotheistic religions.

I’m currently polishing my second novel. In A New Hope we skip ahead almost a year to find Hope and her family that much closer to the coming war.  We also get a glimpse of the battles to come before it ends with a cliffhanger. 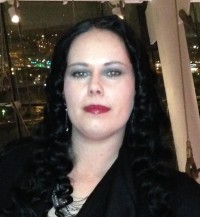 Janelle Samara lives in Kansas City, Missouri, with her husband. When she’s not busy writing, her favorite pastimes include devouring classic books on her tablet, growing organic vegetables, and creating new recipes for her family. When she needs to get out of the house, she has many interests, ranging from watching ballet to fishing with her brothers.

To learn more about Janelle, please visit her website.