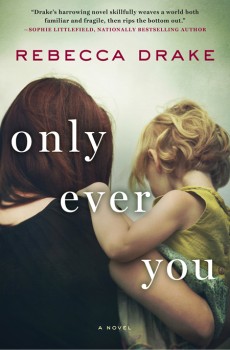 Suspense author Rebecca Drake’s new psychological thriller, ONLY EVER YOU, opens with a gut-wrenching scenario familiar to many parents and care givers. Her heroine Jill Lassiter’s three-year-old daughter Sophia disappears from a playground. As a frantic Jill berates herself for being distracted by her busy life, Sophia is found and returned after just forty minutes. As readers we share Jill’s absolute relief. But something’s not right–and Jill finds a tiny puncture mark on Sophia’s arm. Medical checks reveal no trace of drugs and a deeply rattled Jill has to settle with not knowing for sure what has happened to her daughter. Her consolation is that Sophia is back safe with her and husband David and life can go on as normal. Trouble is, someone has other ideas. Ideas that include Sophia’s abduction and the destruction of the Lassiters’ lives. It’s a taut, tense read in which the reader stays with Jill’s devastated bewilderment and her increasingly desperate search for her daughter and for answers as to what has happened to Sophia.

The disappearance of a toddler is of course every parent’s worst nightmare. Drake says she had a brief taste of that terror when her son was very small. “He wandered away in a store and for a brief period I was terrified that he’d been abducted. It was probably only five or six minutes before we found him, but the store went through a lock down procedure and PA announcements and it felt horribly long.” Yet it wasn’t that experience that provided the direct inspiration for ONLY EVER YOU. “It was a vivid dream I had one night,” says Drake, “about a child disappearing from a playground only to return with a puncture mark on her arm.’ Like many authors, the notepad and pen were ready and waiting. ‘I woke up with my heart racing and scribbled the dream down and in the morning I knew I had a great beginning for a novel.”

Many people think that thrillers have to have a red-numbered ticking clock or a spaceship pilot needing to bounce an asteroid off the sun to save the world. Drake’s novel is a psychological thriller–of course none the less gripping (and many would argue more) due to its subject matter. It’s a sub-genre that Drake says she has always been drawn to, more so than any other crime fiction. “I was really influenced by one of my favorite authors, the late Ruth Rendell (a.k.a. Barbara Vine), who so wonderfully explored the dark side of human nature. I’m fundamentally interested in why people behave the way they do. That’s the big question for me: Why? For me, the internal and interpersonal battles we wage are always more interesting than any external war.”

As a reader, I shared the part of Jill’s reaction that is “what on earth is going on?” and that really kept the pages turning. Drake reckons that her approach to plotting probably helped with achieving the final result. “I’m a bit obsessive about outlining, so much so that I’ve had to learn how to just let go and write that first draft. I’ve always got some sort of road map to write from, although that’s constantly evolving, as I play with pace and how and when to reveal information in order to increase the suspense. I try to deliver the type of book that I like to read—one that leaves readers constantly guessing and eager to find out what happens next.”

As well as sharing Jill’s story, there are other voices and points of view in the novel, which I won’t be too specific about in case of letting slip any spoilers. It’s enough to say that they are very different and I wondered which Drake found most challenging to write. “I found both my protagonist and antagonist in ONLY EVER YOU equally challenging to write,” she says. “They are both mothers, but at two very different stages of parenting.”

She drew on her own life experience, too.  “When I wrote this book I was between those two stages—no longer a mother of young children, but not yet a mother of adult children. Being a parent has been the single most rewarding, while also the most challenging, thing in my life and I realized early on that the job is fundamentally about saying goodbye. From the moment your child is born they are slowly, bit by bit, leaving you and it’s your job as a parent to let them go even though you’re often ripped apart emotionally in the process. While ONLY EVER YOU is obviously a crime thriller, at its core it’s really a story about the deep, abiding love that mothers have for their children. As a mother, I could easily identify with these women in my novel, but writing about parenting was both very personal and emotional.”

In addition to writing her own fiction, Drake is an adjunct instructor for Seton Hill University’s MFA in Writing Popular Fiction. It’s a role she clearly relishes. “I love passing on to students the things that I wish I’d known sooner—like the importance of understanding the three-act structure, or how to focus on big picture, like what’s at stake in a plot, and not on small picture, such as how many characters’ names start with the same letter.”

As is so often the case, Drake has found that teaching reaps its own learning rewards. “I’m always learning new things about my own writing from teaching. There’s direct knowledge transfer, such as when students recommend books on craft that I haven’t read before, but often it’s indirect, through insights gathered from hours of critiquing student writing. Having to analyze and articulate what is and isn’t working in a given story really shapes my ability to think critically about my own writing.”

And Drake has plenty to think about. “I’m really excited about the new psychological thriller I’m writing, which will be released next year, but I don’t want to reveal the plot yet!” 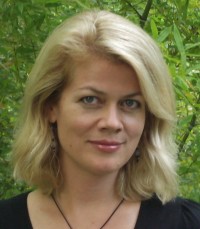 Rebecca Drake moves to hardcover with her breakout psychological thriller, Only Ever You. She is the author of three other suspense novels, Don’t Be Afraid, The Next Killing, and The Dead Place, as well as the short story, “Loaded,” which was featured in Pittsburgh Noir. Rebecca is an instructor in Seton Hill University’s Writing Popular Fiction M.F.A. program. She lives in Pittsburgh, PA with her husband and two children.

Those We Fear by Victoria Griffith