The idea for CROSSWISE first came to S.W. Lauden while doing a crossword puzzle on vacation in Florida.

“I can clearly remember sitting on the porch at the rental house where we were staying and watching the story unfold,” Lauden says. “I’m not much of an outliner, so I just started typing…The four main characters in that first scene—Tommy Ruzzo, Shayna Billups, Jesse Lee Cavanaugh and Sgt. Badeaux—sprang to life and took over.”

A stand alone novella, CROSSWISE follows disgraced police detective Tommy Ruzzo, who now holds  a security job at a retirement community in Florida, as he unravels a murder mystery amongst a slew of former wise guys.

CROSSWISE is full of twists, turns, and mystery. Those who loved Lauden’s previous short fiction will enjoy another round of his quick prose and taut descriptors.

“Short fiction,” Lauden says, “whether it’s flash fiction, a novella, or anything in between—is an interesting challenge because it forces me to jump right into the action and keep the plot moving if I want to tell a complete story. It’s also very satisfying to be able to finish a short story and see it published less than a year later—which hasn’t been my experience with longer works.”

An accomplished drummer and Word.doc believer, Lauden confesses to not always feeling organized.

“…my process is pretty scattered,” Lauden says. “I’ll jot down ideas on Post-It Notes, send myself text messages, and leave voicemails—whatever it takes to capture the idea before it disappears.”

Fans of his work need not worry. Aside from CROSSWISE, which launched on Leap Day, February 29,  Lauden will also launch the follow-up to his full-length novel, Bad Citizen Corporation , later this year.

“It’s called Grizzly Season ,” Lauden says, “and it features a lot of the characters that survived the first book. There’s also a third book planned for that series, so I’ll probably get started on that one next.”

While you’re waiting for those, you’ll want to read CROSSWISE. 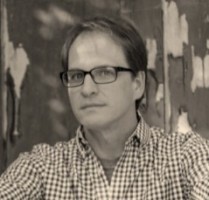 S.W. Lauden is a writer and drummer living in Los Angeles. His short fiction has been published by Shotgun Honey, Out of the Gutter, Criminal Element, Dark Corners, Dead Guns Magazine, Akashic Books, WeirdBook, Spelk Fiction and Crimespree Magazine. His debut novel, BAD CITIZEN CORPORATION, was published by Rare Bird Books in November 2015. His novella, CROSSWISE, will be published by Down & Out Books in March 2016.

To learn more about S.W. Lauden, please visit his website.