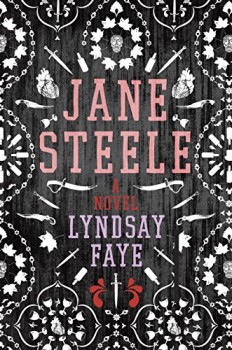 “Reader, I Murdered Him”

First, a confession. I’m fan of historical fiction as well as a fan of historical thrillers. So when I was presented with a take on Charlotte Brontë’s Jane Eyre that has the heroine as a serial killer and the tagline, “Reader, I murdered him,” I was physically incapable of not picking it up. The other reason for wanting to get my hands on JANE STEELE was that the author is Lyndsay Faye, author of the Gods of Gotham series.

I wasn’t to be disappointed. From the off, we’re in a Gothic world that surprises and delights. A picnic that the five-year-old Jane shares with her laudanum-addicted French Mama is all sunshine and drowsy bees in the mind of the reader until Faye drops: “This garden party took place at midnight under a wan, watchful moon.” And so the tone is set. Jane might be the heroine to which awful things happen, but unlike her fictional (double-fictional?) namesake, she is not about to accept her lot.

That lack of acceptance causes her to kill and kill again in an intricate plot that has all the colorful richness of a claustrophobic Victorian drawing room. The book is gleefully wicked (or wickedly gleeful, I couldn’t quite decide) but has a deep vein of outrage threading right through it about the treatment of 19th century women and children.

Now, when one thinks of serial killers, they aren’t usually dressed in bonnets and bustles and they’re certainly not based on one of the great literary Victorian heroines. But historical homages are something with which Faye already has form. “My first novel, Dust and Shadow, was a Sherlock Holmes pastiche that ended up getting endorsed by Caleb Carr,” she says. “So I knew I could play with the classics.” After the critical success of the Gods of Gotham series, Faye was ready to turn from 19th century New York City police to England and a much different world. And to writing her first female protagonist.

Her creative decision was born out of huge admiration and affection on Faye’s part. “The main issue with thinking that you can reimagine Jane Eyre as a killer is that you theoretically would be worried about pissing people off—but I adore the novel Jane Eyre, unequivocally, so I suppose that I felt it was in hands that weren’t going to smash it to smithereens, or at least I tried my very best not to.  I essentially wrote a new character who admires her as much as I do, while being able to comment on some of her choices from a more modern perspective.”

And the perspective is wonderful. Much of the appeal is in Faye’s deft use of melodrama, which she clearly relishes: “I did as much as possible try to mirror what was going on in Jane Steele’s life with what was going on in Jane Eyre’s.  So you definitely have to have the miserable and poor orphaned lot in life, the wretched boarding school, the Gothic manse, the brooding Byronic fella with really expressive eyebrows, etc.”  Yet Faye cuts this with a large dollop of self-awareness, which brings the novel such a refreshingly different tone and also makes for so many (darkly) hilarious moments.

The expected Victorian history is given a further layers with the inclusion of the Anglo-Sikh wars in the Punjab. Faye brings the British Empire right into England/Jane’s world, instead of relegating it to lesser history or importance as is so often the case. Faye says she’s not comfortable with “writing novels solely about white people, exactly the same way as I’m not comfortable writing novels solely about heterosexual people.  There are plenty of those, and I adore many of them, but I don’t write them, let’s put it that way.  So I knew I wanted the entire household other than Charles Thornfield (the master, owner, what have you) to be immigrants from foreign wars the East India Company has embroiled itself in.”

It of course had its research challenges, or as Faye puts it in a way that will appeal to all writers of historical fiction: “That was one heckfire of a trick pony.’ As she recalls, ‘There was not a paucity of choice.  There were about six Anglo-Other People wars I could have chosen from. But then I grew absolutely enthralled by Sikhism.  It’s a culture of warriors (by necessity) based on rejection of India’s caste system and belief that God is in everyone (as first related by Guru Nanak) that basically became the richest empire on earth and then lost everything to the Brits (the Koh-i-Noor diamond, or ‘mountain of light,’ is in the Crown Jewels). So…yeah, I couldn’t not tell that story.” 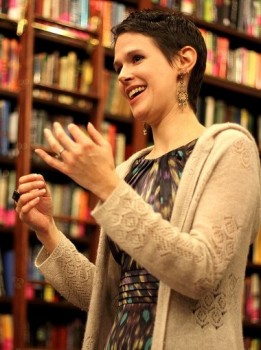 To do the research, she used three categories: “Modern Sikh scholars writing books about the history of their own people, a by no means exhaustive but very diligent study of their holy book, the Guru Granth Sahib, and books written by the British as close to the time period as I could find.  It was a battle waged with a trident of sources.”

There is much to admire in this novel that is so evocative of Victorian taste. But I particularly loved the names Faye gives to her characters, which are often like Dickens on steroids. Faye modestly demurs. “Yes…well, here’s the thing.  I can’t ever be Dickens on steroids because Dickens himself thought these names were good ideas: Affery Flintwich. Bucket. Cleopatra Skewton. Prince Turveydrop.”

Yet I’d counter with: Grizzlehurst. Hezekiah Pepper. Miss Lilyvale. And, my favorite of all, diabolical headmaster Vesalius Munt. Faye admits a certain fondness for this one. “He had to sound like a complete skin tent and utter blackguard the instant you read his name, so V’s and M’s are very good for that.  (Vader, Morder, Moran, Moriarty, etc).  And my other favorite names are every Sikh name in the entire book, because they all mean something in translation and that all speak of that fact.”

With no risk of spoilers, I wondered if we’d be hearing more from Jane Steele? Sadly, it would appear not. “JANE STEELE is a standalone.”

But of course there’s more to come from Faye. “I’m still at the research phase of my next novel with Putnam, but I’m publishing a collection of all my Sherlock Holmes short stories expanded, plus some new ones, edited by Otto Penzler and published by Grove Atlantic next year.”

Reader, I recommend her.