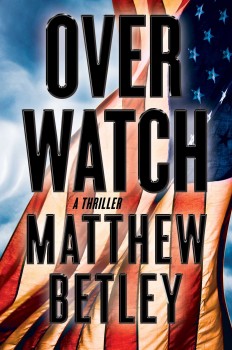 When I first got into reading thrillers, there were three authors who distinctly defined the genre for me: Clive Cussler, Tom Clancy and Robert Ludlum. Their stories were tall, filled with detailed descriptions and, above all, very entertaining. I had the chance to read an advance copy of debut author Matthew Betley’s OVERWATCH, and somehow he managed to combine the style of my top three.

This first entry into a new series is action-packed; in fact, that term may be an understatement. In two simultaneous timelines we fear the outcome of a global threat while we learn what made the hero, Logan West, what he is today.

Mr. Betley graciously agreed to answer some questions for The Big Thrill.

In your own words, what’s the premise for OVERWATCH?

When Logan West impulsively answers a dead man’s ringing phone, he triggers a global race against the clock to track down an unknown organization searching for an Iraqi artifact that is central to a planned attack in the Middle East—one that will draw the United States into a major conflict with Iran.

It should be noted that it was Logan who actually killed that man before answering the call. What happens next?

Logan, a former Marine officer, is quickly contracted as a “consultant” to assist the FBI as part of a special task force bent on stopping the shadowy operatives, whatever the cost. The battles are nonstop, from the plains of the Midwest, to mansions in northern Mexico, to the war-torn Al-Anbar province, pitting an international team against trained mercenaries employed by the world’s largest private security contractor…whose owner has a personal vendetta against the US government. Meanwhile, Logan is battling his own demons, especially the trauma of the ambush that his Force Recon unit suffered at an insurgent torture compound in Fallujah in 2004, which threatens to destroy everything he holds dear.

Can you tell us about the origins of Logan West and how the character was created?

As a former Marine officer, I wanted to create an action thriller protagonist whose origin was from the Iraq conflict, as that was an event that permanently changed me and my world view.  As an officer who was privileged to command a scout sniper platoon – albeit, for much too short of a time around 9/11 – and as a recovering alcoholic, I decided to follow the adage of “write what you know,” giving Logan a similar background but making him a former platoon commander of the Marine Force Reconnaissance Company and a relapsing alcoholic.

How did you prepare for this task?

I had been obsessing about writing a novel for more than a year, starting in August of 2009 when I read a thriller by a best-selling author that had been recommended in Entertainment Weekly. The book bored me out of my mind, but I didn’t do anything about it initially. I had all of this dialogue bouncing around in my head, and finally, the compulsion won over, and I just sat down and started writing August 2010, finishing the first draft roughly 18 months later.  I knew exactly what I wanted to create, but I let the story go where it wanted to, which is how I write.  For book two – already finished and in copy editing for 2017 – I outlined the plot a little more in my head, but that was about it.  I don’t have a lot of notes before I start writing.  I do my research and I just go.

Speaking of adages, there’s also one that says a story is only as good as its antagonist. Without giving away the plot, what can you tell us about Cain Frost?

Cain Frost, the founder and CEO of the world’s largest private military contractor company, is the antagonist.  Driven by revenge but also ideology, he’s a focused and determined man every bit as lethal and dangerous as Logan…probably more so since he’s sober and Logan is struggling with that as the book opens.

The equivalent of the Droid with the secret plans everybody’s after is the Iraqi flag Mr. Quick brought home from battle. There have been several stories of soldiers bringing items that are not exactly spoils of war but rather mementos. Based on your experience, how true is that in real life and what is the military’s official position about it?

Other than flags, I hadn’t heard–I, personally–of other things brought back. And honestly, it’s been so long that I have no idea what the military policy would be, although I can’t imagine they’d allow a lot.  The one thing I think I remember was that no captured weapons could be brought back for obvious reasons.  Even then, I could be wrong.

The fight scenes include very detailed descriptions of the broken ribs, shattered skulls and other battle wounds, was it a conscious decision to make them like that?

Absolutely.  I intentionally wanted to create a very visceral experience for the reader.  I want the reader to feel–and see in his or her mind’s eye–every punch, kick, or shot in order to deepen the immersive experience.

The story definitely has room for expansion. What happens after OVERWATCH?

Book two is entitled First Shot and is a continuation of the events in Overwatch.  I actually have the first five books completely outlined in my head–which was my intent from the beginning–as part of one long story arch with the characters evolving and the larger conspiracy unraveling bit by bit.  Having said that, I also wanted each novel to be a self-contained adventure with a beginning and an end.  The trick will be to pull it off, but I think First Shot moves the train much further down those tracks.

What kind of promotion will you be doing for the novel?

We’ve got a major marketing campaign behind Overwatch.  In addition to the multiple interviews I’m doing with you, the Military Times, and other fan sites, I’m also going on a book tour in several parts of the country for that, I’ll be on the cover of Ingram’s Armed Forces Advance Supplement which goes out to booksellers, librarians, and international subscribers, I have an upcoming TV appearance in May, advertising through the Conservative Book Club, and there will be 30-second radio ads read by Sean Hannity, Mark Levin, and others on XM Radio’s The Patriot Channel.  There are several other things in the works, but we’ll know more in the next few weeks.

Are you going to attend ThrillerFest in July?

I will definitely be attending part of the convention.  It’s been on my to-do list, and now that publication is here, I’m finally getting to check it off.  🙂 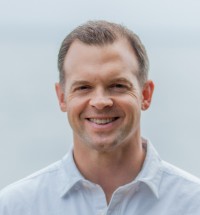 Matthew Betley grew up in Cincinnati, Ohio, which he considers home after his family moved there from New Jersey, where he was born and which also explains his affinity for the New York Yankees.  He attended St. Xavier High School and then Miami University in Oxford, Ohio, where he graduated with a B.A. in psychology and minors in political science and sociology.  He also spent the first semester of senior year investigating felony murder cases as an intern investigator in Washington, D.C., for the Public Defender’s Office, a formative experience that provided countless stories that could fill the pages of a non-fiction novel.  Upon graduation, he worked in corporate America for five years in Cincinnati before joining the Marine Corps in 1999.

Matt spent ten years as a Marine officer and was trained as a scout sniper platoon commander, an infantry officer, and a ground intelligence officer.  His experiences include deployments to Djibouti after 9/11, and Fallujah, Iraq, prior to the surge, both in staff officer support billets.

Finally, and most importantly, Matt is a recovering alcoholic with nearly seven years of sobriety.  He credits the Marine Corps with providing a foundation in discipline and personal accountability for his desire to initially seek help.  Matt is open and direct about it and has spoken in front of large groups of people with one clear message – if he can get sober, so can anyone.  He credits his recovery with providing the authenticity for Logan West’s struggle with his inner demons.