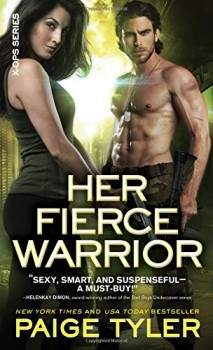 “If you’re going to dream, dream big.” These are words that Paige Tyler lives by. Her series’ and her characters have built a fan base that is never-ending. Why is that? Because when it comes to this author, her imagination never rests. She continues to create.

And in this interview with The Big Thrill, Tyler not only offers an inside look at the newest title in her X-OPS novels, but also reveals that a brand new series is about to begin.

The X-OPS series has become a much beloved “journey” by readers. Can you give us all a peek into the newest novel, HER FIERCE WARRIOR?

Well, the reader has been getting glimpses of Minka Pajari in the epilogue of the first three books in the series. I guess I’ve teased and tortured you all long enough, so it’s time for Minka to meet HER FIERCE WARRIOR.

Minka was able to escape from the people who’ve been experimenting on her at the end of Book 3, Her Wild Hero, and now she’s trying her hardest to get home. But the things her captors did to her have turned her into a monster—at least in her eyes. When things are looking their lowest, and she’s not sure she has the strength to keep going, Special Forces soldier Sergeant First Class Angelo Rios appears. For reasons she can’t understand, in this man’s arms, she finds peace from the beast inside. But Angelo is a Special Forces soldier. He lives his life on deployment, never knowing how long he’ll be gone or when he’ll be home.

Is there a unique moment of fan interaction that you can share with readers?

I love all the different places I’ve gone for book signings because it’s the fans who matter, not the places they’re located. But I have to admit, the coolest place I’ve ever had a signing was at an amazing book event called Season of Shifters, put on by author A.C. Arthur. Not only was it held at Disney World—THE MOST AMAZING PLACE ON THE PLANET—but we got to have a personal visit from Mickey! If you didn’t know it, I’m somewhat crazy about Disney. Beyond the whole Disney thing, this particular conference was so laid back and fun that I still remember it vividly today.

And as it turned out, I had one of those unique fan interactions there as well. I was talking to a reader who loves the X-OPS series, and she was very intrigued by one of the soldiers on the Special Forces A-team in the books. I won’t say which character we talked about, but she pointed out all kinds of things that made her think he was a shifter. I truly had never thought about it, but the more we talked, the more an idea started jelling in my head. When you read HER FIERCE WARRIOR, you’re going to get a chance to see what came out of that conversation and which Special Forces soldier is, in fact, a shifter—all thanks to that awesome reader. (Thank you, Venus.) By the way, she shows up in the book, too!

Is there one genre you have not delved into yet that you would like to?

I’m trying hard to fit in time to work on a New Adult series. When I find myself with some spare time, and grab a novel to read, it’s invariably a New Adult book. I have a couple ideas I’m working on, including a cool three-book series I’m writing with two other New Adult authors, so it’s mostly just a matter of finding enough hours in the day.

What is your favorite fictional villain and hero/heroine, and why?

I’ll keep this one simple. I’m going with Landon Donovan and Ivy Halliwell from X-OPS as my hero/heroine. They’re the two characters who picked me up and carried me to New York; therefore, they’ll always be very special to me. And of course, as anyone who’s read the first three books in X-OPS knows, they continue to be the bedrock of the series. Every future H/H will have a connection to the two people who started this ride, and when the series wraps up (years and years from now) Ivy and Landon are going to be front and center.

As far as my favorite villain, it has to be Keegan Stutmeir or Dick Coleman from X-OPS. Dick is such a, well…he’s exactly what his name suggests! He’s irritated every other character—and me—in the series at least once. And, as far as Stutmeir, can I say that for a character who didn’t have a lot of page time, I took more pleasure in killing off that man than is probably healthy?

If you knew that in the future someone who wants to be an author will dig up a time capsule with a note in it from you, what would your letter say? What advice would you give?

Write because you love to write, and because you have a story in your head that must come out. Writing—especially when you first start—can be a painful learning experience. Lots of people might say things you’d rather not hear. You need that inner love of the process and a faith in your muse to get you past that period. Believe in your story when no one else will.

Is there one author out there you’d like to call and say: “Hurry up with your next book!” because you wish they’d write at least three a month?

That is a hard question to answer! I’m going to say Suzanne Brockmann. I love her books!

Do you have a specific character of your own that you would love to be in a movie? Who would play them on screen?

Any one of the feline shifters in my X-OPS series (Ivy, Layla, Minka…and maybe some others that the readers haven’t gotten to experience yet.) They’re all just so kick-butt-yet-feminine at the same time. And as far as who would play them in a movie…well me, of course! If you’re gonna dream, dream big!

Which book series should be an ongoing TV show? Your fans want them all, but if you had to choose just one, which would it be and why?

Well, that’s just unfair! Both my X-OPS and S.W.A.T. Series would look awesome on TV! But if you’re going to limit me to one, I’ll go with X-OPS (because that’s the one I’m promoting right now).

I think X-OPS has a great collection of characters and a convoluted plot. The series is full of sexy sizzle, danger, suspense, action, and intrigue. Book by book, it’s hard for the reader to know what’s coming next. I think those elements would make a great TV show, so if you know someone in Hollywood, feel free to tell them!

Per your website, it looks like football is something you like. Do you have a favorite team? And, just between you, me, and the readers, is there one QB that rates “Alpha Male” status?

I love the Cowboys—even if I don’t agree with all their personnel decisions. I know, I know. Twenty-some years without even sniffing the Super Bowl. But you have to stick with your team through thick and thin, no matter how nearly invisible the thin part gets. I really can’t say there are many QBs I see out there in the Alpha Male category. Okay, maybe there is one who comes to mind, but for the sake of my marriage…that QB will remain nameless.

Paige Tyler is a New York Times and USA Today Bestselling Author of sexy, romantic suspense and paranormal romance. She and her very own military hero (also known as her husband) live on the beautiful Florida coast with their adorable fur baby (also known as their dog). Paige graduated with a degree in education, but decided to pursue her passion and write books about hunky alpha males and the kick-butt heroines who fall in love with them. She is represented by Bob Mecoy.