When a Ponzi Scheme Turns Deadly 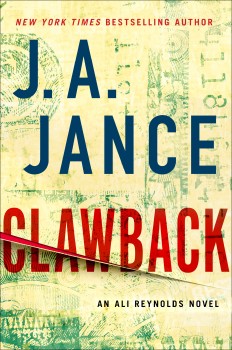 J.A. Jance has reached national bestseller lists over and over with her multiple series, known for their fast-paced plots and appealing protagonists. CLAWBACK, her new novel, features Ali Reynolds. When the series began, Ali, a TV journalist, was bounced from her job by bosses who want a younger face and betrayed by her husband and moved to Sedona, where her parents own a diner. Twelve books later, Ali is happily remarried and involved in meaningful work, but her life turns upside down when her father is suspected for murder after a Ponzi scheme destroys his life savings. Jance knows firsthand the devastation of such financial crimes. She and her own husband lost half a million from their retirement fund because of a Seattle-area Ponzi scheme. As she says, “It’s a very bad idea to make a mystery writer mad.”

I loved the Sedona, Arizona setting for CLAWBACK. How do you think that city, with is particular mixture of retirees and wealth and natural beauty, plays into the plots of your writing?

Locale always plays an important part in my books and in my plots.  By using places I know as the background for my stories, I don’t have to invent my own private universe.  Invented things are a lot more difficult to remember and keep track of from book to book than real things are.  Knowing the geography, the distances, the weather involved as I write a particular passage makes it possible for me to put all those things in the background while keeping an eye on what my characters are saying and doing in the foreground.

As for Sedona specifically?  I love it.  I love the scenery and the people.  By the way, there is a homeless camp, summer and winter, far up on the edge of the Mogollan Rim, but the camp in the Ali books is a fictional creation.

And yes, Sedona does have its share of one-percenters who jet in and out of town, staying far above the fray as it were.  But then there are all the “little” people, the ones who do the necessary jobs that keep all the wheels on the bus as far as the town’s tourism industry is concerned.  They’re also the ones who keep the other necessary pieces of infrastructure in good working order.  I think CLAWBACK shows those two parts of the community in an interesting juxtaposition.

I read CLAWBACK during the same week that “Madoff” was shown on television. You have been hurt by another financial criminal. Do you think robbing people of their investments and Ponzi schemes are a ripe fodder today for thriller plots?

Having been victimized by a Ponzi scheme—please note the words on CLAWBACK ‘s dedication page—I absolutely believe Ponzi schemers are “ripe fodder.”  Unfortunately, the fictional outcome in CLAWBACK is much more satisfying to the victims involved than the “real world” outcome of ours has turned out to be.

Your books are known for their skillful pacing. What are some of your techniques for keeping the tension high?

Because I don’t outline, I walk along with my characters as they’re solving the various crimes.  If a story stops maintaining my interest, then I’ve got a severe tension problem.

You were discouraged from writing fiction by a college professor and your first husband, himself a writer. How did you persevere in the face of such negativity? 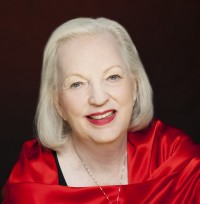 My first husband was a wannabe writer.  He was allowed in the creative writing class that was closed to me, but he never published anything.  Calling him a writer is giving him far too much credit.  I wanted to be a writer from second grade on.  Yes, there were some roadblocks along the way.  Having my first husband tell me that there was going to be only one writer in our family and he was it meant that I didn’t start writing until after I divorced him.  By then I was in my late thirties.  My first book was published when I was 41.  But being that old when I started writing professionally meant that I’d done a lot of living beforehand.  I’d spent 18 years of my life with a man who was slowly dying of alcoholism.  I’d taught on an Indian reservation.  I’d worked in the life insurance industry.  I’d briefly crossed paths with someone who turned out to be a serial killer.  So when I was finally free to write, I had lots of experiences that could be turned into literary fodder.  What I’ve learned over the years is that, for a writer, everything is usable—even the bad stuff.  Sometimes, as in CLAWBACK, especially the bad stuff.

You have a rich variety of female characters in CLAWBACK, from heroine to killer, and several in-between. Is that a goal, to make women the main movers of the story?

I want ALL my characters to walk and talk and carry the story forward.  In this book, we learned a lot about Ali’s father, Bob Larson.  We followed him into a pit of despair, and saw him find the spark that helped him climb back out of said pit.  In his case, what goes around comes around—and in a good way.

What do you think of the rise of the “domestic thriller,” in which the intimate danger is the most deadly: your husband, your sibling?

Unfortunately, “intimate danger” is all too true, especially for families struggling with someone who has mental health issues.  Society tends to leave those folks to fight their own battles until it’s too late.  Only then does it become a “police” matter.

You’ve grown a tremendous reader fan base. What is some advice you can offer other thriller authors just beginning their career in how to build that?

I have a database.  As of this morning it has 12,204 names in it.  Those are people who have read my books and sent me a comment via e-mail, usually.  I answer all e-mails—good, bad, or indifferent—myself.  No one else touches them.  This morning when someone wrote to point out that there was a subject/predicate disagreement in one of my older books, I immediately wrote to thank him for bringing it to my attention and sent his note along to my editor for correction.  The people in my list are MY people.  Some are new readers; some have been with me from the beginning.  Those are the folks who receive my newsletters when new books are coming out or when schedules are being posted. They’re also the ones who place advance orders for books and show up at signing events.

Fans are important.  My advice to new writers would be this:  PAY ATTENTION TO THEM!  They are your bread and butter.

With so many books coming out from you now, what is your writing routine and how do you divide time between plotting, writing, editing and promotion?

I’m in the process of finishing the next Joanna book, but by answering this e-mail, I’m currently working on promotion for CLAWBACK as well.  My life is essentially a juggling act.    Fortunately for me, I’m a woman and a mother, so I have some experience at doing more than one thing at a time.

To learn more about J.A. Jance, please visit her website.