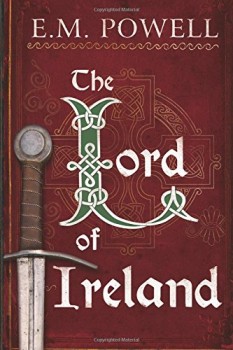 The island of Ireland occupied a unique place in the medieval world. It was, as far as the millions of inhabitants of Europe were concerned, It. Nothing else existed to the west (sorry, Americas). In a 7th Century letter to the Pope, Saint Columbanus refers to the Irish as the ‘Dwellers at the Earth’s Edge.’ And even by the 12th Century, Gerald of Wales, royal clerk to England’s King Henry II, still confirmed Ireland as ‘the farthest western lands…Beyond the whole horizon only the ocean flows and is borne on in endless space.’

Now, Henry had a keen interest in Ireland and, as it happens, so do I—it being the land of my birth and all. But I also have a keen interest in Henry. The first two books in my medieval thriller Fifth Knight series have featured my fictional hero, Sir Benedict Palmer, in Henry’s service. Henry first arrived in Ireland in 1171. He had already sent troops there and he wanted to stamp his authority on it. But by 1185 it was in a state of major unrest, with native Irish kings and Henry’s Anglo-Norman barons who had taken Irish lands fighting it out for power.

The King had an ingenious solution: make his 18-year-old son Lord of Ireland and send him over to sort it out. And that son was John. Yes—the John who would one day be Bad King John. It says something about a British Royal when even Disney has a pop at them. John’s portrayal as a thumb-sucking lion prince in the classic animation Robin Hood is only one of many unflattering renditions of him.

Trouble is, they aren’t far off the mark. John acquired his terrible reputation by simply being John. Suffice to say, his campaign in Ireland was a disaster—a gift to me as a novelist. A further gift was that the King’s clerk, Gerald, went with John, leaving us many first-hand accounts of what went on. And so, book #3, THE LORD OF IRELAND, was born. 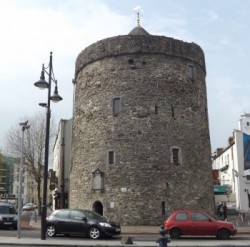 Of course I couldn’t send Sir Benedict Palmer off to the earth’s edge without first checking out the locations myself. Most thriller writers like to get their research feet on the ground where possible, and we historical thriller writers have a particular fondness for it.

John landed at the Port of Waterford on the south east coast on April 25 1185, with three hundred knights in tow. Still standing tall on Waterford’s quay is the medieval Reginald’s Tower, part of the old city’s fortifications which date from the time of the Vikings.

While the Tower would have looked a bit different in John’s day, we do know precisely what he did as he stood outside it. A group of powerful Irish chieftains came to pay tribute to him as Henry’s representative, greeting him as their lord. John’s response? Well, according to Gerald, John ‘pulled some of them about by their beards, which were large and flowing according to the native custom.’ Suitably angered and very unimpressed, the Irish made for the court of one of the Irish kings, where they reported back on the insults and how John was ‘a mere youth…a stripling who only listened to youthful advice.’ Worse, they decided that rather than make peace with John, they would ‘plot to resist [John’s force]…guard the privileges of their ancient freedom’ with their lives, and ‘make pacts’ to resist him. Oh, John.

Meanwhile, John began making grants of land to his own friends— land that loyal supporters of Henry already held. The result, according to Gerald, was that those who were dispossessed ‘went over to the side of the enemy.’ But John carried on. He set about establishing castles to take control of the land. We know from Gerald that there were three sites: Tibberaghny, in Co. Kilkenny, Ardfinnan in Co. Tipperary and Lismore in Co. Waterford. Nothing remains of these structures, which were probably made of wood. 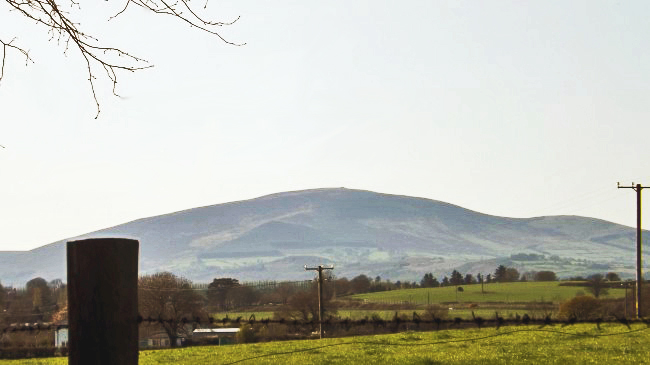 Slievenamon, Co. Tipperary- the mountain of the women.

When I stopped off at Tibberaghny to check out the lie of the land, a man with a stick just happened to be walking past. (Note: this always happens in Ireland. There is always a man with a stick.) He a) enquired in a roundabout way what I was up to (also what AMWAS always does) and b) announced he was off to climb Slievenamon (in Irish, Sliabh na mBan) the mountain in the distance.

This was the point where it hit home that I had an extra layer of history. Yes, I was tracking the events of 800 years ago. But those boots of the Norman invaders were already tramping through history, through a land that had its unique ancient past. Slievenamon means ‘mountain of the women’. Legend has it that Fionn mac Cumhaill, Irish hero of the Fionn or Ossianic cycle of tales, and leader of a great band of warriors, chose his bride Grainne from the winner of a group of young women who raced to meet him at the top of the mountain. Legend also has Fionn as a pragmatist: he secretly told the lovely Grainne of a short cut, so she’d reach the summit first. 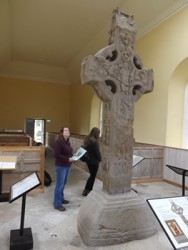 Powell and the Durrow High Cross.
The cross dates from c850.

As for new arrival John in 1185, all was proceeding very badly. There were losses of life on both sides. He (or rather, his more able men) made a few gains, but his forces were well and truly routed in equal amounts by some of the native Irish kings. His less able men drank, caroused and fought with each other. When John failed to pay them, they deserted.

One would have thought that John would have accepted some responsibility for his failings. But no. Instead, he accused one of Henry’s men of treacherous dealings with the Irish. That man was Hugh de Lacy, Henry’s first Lord of Meath. 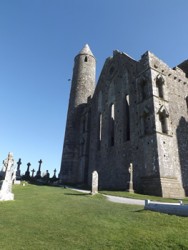 De Lacy is a major character in The Lord of Ireland. He was also a major thorn in Henry’s side, being far too good at his job for the King’s liking. He’d taken the ancient kingdom of Meath (Mide) from the Irish and constructed many castles. One was at the site of a sixth century monastery at Durrow in present day Co. Offaly. De Lacy’s mark on the land is no more. But the magnificent ninth century High Cross of Saint Colmcille still stands there, as it had done so 300 years before any Anglo-Norman’s arrival.

De Lacy’s main castle was at Trim in Co. Meath. Trim is the largest Anglo-Norman castle in Ireland and still the best preserved and is incredibly impressive.

He’d also married a daughter of Rory O’Connor, the Irish High King. Some chroniclers suggest that de Lacy was lining up to take all of Ireland from Henry. We know John scuttled off to Dublin where he stayed until returning to Henry in December 1185, complaining bitterly about the Irish and Hugh de Lacy and blaming de Lacy for his failure.

In my novel, I add an extra layer. I needed a large monastery for the murdering climax of the book. And as large holy houses go, they don’t come much bigger than the Rock of Cashel in Co. Tipperary. We don’t know if John ever visited, but Henry and Hugh de Lacy had stayed during the 1171 campaign. And to my joy, two of the buildings that stand now were there in 1185. First, Cormac’s Chapel, which was consecrated in 1134.

And oldest of all, its Round Tower built around 1100. No one is quite sure what the exact purpose of Round Towers was, though they probably housed bells and valuables and may have been a place of refuge. But the architectural shape and form of Round Towers is unique to Ireland. They do things differently at the earth’s edge, y’know.