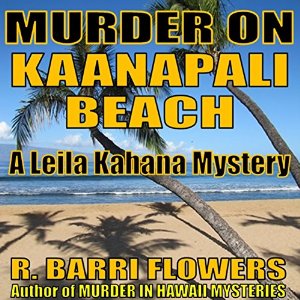 Murder on Kaanapali Beach is the highly anticipated sequel to the bestselling Murder in Maui by award-winning crime writer R. Barri Flowers.

Maui County homicide detective and composite sketch artist Leila Kahana and her new partner, Detective Jonny Chung, take on the case of a beautiful college instructor found murdered on the island’s famed Kaanapali Beach, even as Leila continues to be haunted by a frustrating serial murder case.

Joyce Yashiro, who was estranged from her husband, was suffocated when she was forced face down into the soft sand on the beach. The case is anything but simple as the victim’s life and those of the people around her are put under the microscope, with a killer watching every move the police make.

In a seemingly unrelated case, Detectives Rachel Lancaster and Trent Ferguson investigate the execution-style murder of businessman Parker Breslin in front of his Kihei home. It seems that more than one person may have wanted Breslin dead and someone made sure it happened.

As the two murder investigations progress with a myriad of suspects, a surprising connection between the cases and crimes emerges. But is there one killer or two?

As these cases move full steam ahead, there is also a brutal serial killer on the loose. Dubbed the “Zip Line Killer,” he has been terrorizing women on the island, strangling them with a zip line, for over a year, while staying safely out of reach of the authorities.

Now he has struck again and Leila and Chung, along with Lieutenant Blake Seymour, are determined to bring him down.

Do they finally have a break that will put this frightening killer behind bars before he strikes again? Or is he merely toying with them while sizing up his next victim?

Bonus material includes a complete mystery novelette, Kaanapali Beach Paradise, and excerpts from the upcoming third book in the Leila Kahana Mysteries series, Murder of the Hula Dancers; as well as the author’s bestselling Hawaii mysteries, Murder in Honolulu and Dead in Pukalani.

MURDER ON KAANAPALI BEACH is available from Amazon, Amazon UK and Audible.

“When a woman is killed on Maui’s Kaanapali Beach, homicide investigator and composite sketch artist Leila Kahana is faced with a real conundrum. Is the dead woman yet another victim of the Zip Line Killer, or is a copycat at work? R. Barri Flowers gives readers a fine procedural along with appealing characters and great local color. ” — Bill Crider, Edgar winner and bestselling crime writer on Murder on Kaanapali Beach

“A suspenseful puzzle at its core. Murder on Kaanapali Beach (Book 2 in the Leila Kahana Mysteries series) is an engaging read masterfully crafted with all the twists and turns of modern day police procedurals. R. Barri Flowers weaves a riveting crime tale set in Hawaii oozing with authenticity, grit and drama.” — Kim Cresswell, award-winning and bestselling author of the Whitney Steel series on Murder on Kaanapali Beach

“A top flight police procedural and a must read for all fans of suspense. R. Barri Flowers masterfully weaves two murder investigations together while trying to bring down a serial killer known as the Zip Line Killer. The contrast of seamy crime to the beautiful paradise setting adds to the gripping tension. Flowers does for the beach what Benchley did for the ocean.” — Joe Moore, #1 Amazon and international bestselling co-author of The Tomb on Murder on Kaanapali Beach

“A gripping and tightly woven tale you won’t want to put down. Author Flowers neatly contrasts the natural beauty of a tropical paradise with the ugliness of murder and its aftermath.” — John Lutz, Edgar winner and bestselling author of Pulse on Murder in Maui

“Infidelity and murder in paradise lead to a one of a kind case for PI Skye McKenzie Delaney, and an enjoyable ride for the reader. Definitely put this one on your list.” — John Lutz, Edgar winner and bestselling author on Murder in Honolulu

“R. Barri Flowers’ novel, Murder in Honolulu, is a gripping tale of crime and investigation, set in a vivid, gritty island underworld. It is filled with excitement, a sense of place, and memorable characters. Highly recommended!” — Douglas Preston, New York Times bestselling author

R. Barri Flowers is an award winning criminologist and the bestselling author of gripping mystery, suspense, and thriller fiction, including Murder in Hawaii Mysteries, Fractured Trust, Before He Kills Again, Dark Streets of Whitechapel, Dead in Pukalani, Justice Served, Killer in the Woods, and State’s Evidence.

Flowers is the bestselling author of true crime books as well, including Murder Chronicles, The Sex Slave Murders, Serial Killer Couples, Mass Murder in the Sky, and Murder at the Pencil Factory.