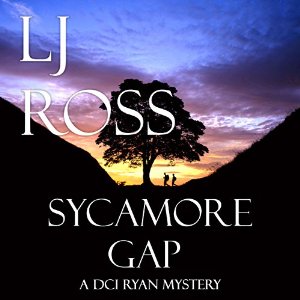 The past never stays buried for long….

Detective Chief Inspector Ryan believes he has put his turbulent history behind him. Then, in the early hours of the summer solstice, the skeleton of a young woman is found inside the Roman Wall at Sycamore Gap. She has lain undiscovered for 10 years, and it is Ryan’s job to piece together her past.

Enquiry lines cross and merge as Ryan is forced to face his own demons and enter into a deadly game of cat and mouse with a killer who seems unstoppable. Murder and mystery are peppered with a sprinkling of romance and humour in this fast-paced crime whodunnit set amidst the spectacular scenery of Hadrian’s Wall country in Northumberland.

SYCAMORE GAP is available from Amazon and Amazon UK.

Born in Newcastle-upon-Tyne, LJ Ross graduated from King’s College London with undergraduate and postgraduate degrees in Law and continued her studies in Paris and Florence. After working in the City as a regulatory lawyer for a number of years, she realised it was high time for a change. The catalyst was the birth of her son, which forced her to take a break from the legal world and find time for some of the detective stories which had been percolating for a while and finally demanded to be written.

She lives with her husband and young son in the south of England, but will always be a northern girl at heart.

Her first book, “Holy Island”, has consistently been listed as an Amazon bestseller since its release in January 2015 and hit the Amazon UK Kindle #1 position in May 2015. Its sequel, “Sycamore Gap” was released in September 2015 and is already a #1 bestseller. She is currently working on the third book in the DCI Ryan series, which should be available in early 2016.