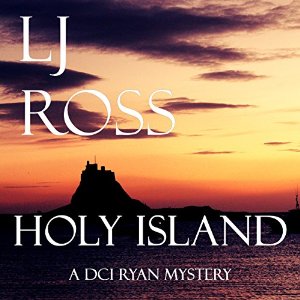 Detective Chief Inspector Ryan retreats to Holy Island seeking sanctuary when he is forced to take sabbatical leave from his duties as a homicide detective. A few days before Christmas, his peace is shattered, and he is thrust back into the murky world of murder when a young woman is found dead amongst the ancient ruins of the nearby priory.

When former local girl Dr. Anna Taylor arrives back on the island as a police consultant, old memories swim to the surface, making her confront her difficult past. She and Ryan struggle to work together to hunt a killer who hides in plain sight while pagan ritual and small-town politics muddy the waters of their investigation.

Murder and mystery are peppered with a sprinkling of romance and humour in this fast-paced crime whodunnit set on the spectacular Northumbrian island of Lindisfarne, cut off from the English mainland by a tidal causeway.

HOLY ISLAND is available from Amazon and Amazon UK.

Born in Newcastle-upon-Tyne, LJ Ross graduated from King’s College London with undergraduate and postgraduate degrees in Law and continued her studies in Paris and Florence. After working in the City as a regulatory lawyer for a number of years, she realised it was high time for a change. The catalyst was the birth of her son, which forced her to take a break from the legal world and find time for some of the detective stories which had been percolating for a while and finally demanded to be written.

She lives with her husband and young son in the south of England, but will always be a northern girl at heart.

Her first book, “Holy Island”, has consistently been listed as an Amazon bestseller since its release in January 2015 and hit the Amazon UK Kindle #1 position in May 2015. Its sequel, “Sycamore Gap” was released in September 2015 and is already a #1 bestseller. She is currently working on the third book in the DCI Ryan series, which should be available in early 2016.