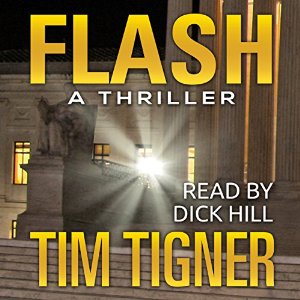 TWO BLOOD-SPATTERED STRANGERS awake, locked in the trunk of a car—with a murdered cop and the smoking gun. Aside from raging headaches and no idea what’s happened, they appear to have nothing in common. Troy thinks it’s 2001 and he’s still a combat surgeon fighting terrorists in Afghanistan. Emmy believes it’s 2002 and she’s still grifting a living from the streets of L.A.

Are they archenemies or coconspirators? Lovers or friends? What are they doing in the Caribbean, and why is a Croatian assassin determined to kill them? The only thing they know for certain is that they’ll be spending the rest of their lives in prison if the police catch them before they learn the truth.

“An extraordinary thriller that has everything a reader could desire: a well laid plot, unexpected twists and turns, and great character development.” —ReadersChoice.com

FLASH is available from Amazon and Audible.

“Not a moment goes by when readers won’t be shocked, surprised and delightfully entertained.” —BookPleasures.com

“Kept me on the edge of my seat, biting my nails reading with anticipation. I loved every second of this book, especially the characters’ witty personalities.” —StuffedShelves.org

Tim began his career in Soviet Counterintelligence with the US Army Special Forces, the Green Berets. That was back in the Cold War days when, “We learned Russian so you didn’t have to,” something he did at the Presidio of Monterey alongside Recon Marines and Navy SEALs.

With the fall of the Berlin Wall, Tim switched from espionage to arbitrage. Armed with a Wharton MBA rather than a Colt M16, he moved to Moscow in the midst of Perestroika. There, he lead prominent multinational medical companies, worked with cosmonauts on the MIR Space Station (from Earth, alas), chaired the Association of International Pharmaceutical Manufacturers, and helped write Russia’s first law on healthcare.

Moving to Brussels during the formation of the EU, Tim ran Europe, Middle East, and Africa for a Johnson & Johnson company and traveled like a character in a Robert Ludlum novel. He eventually landed in Silicon Valley, where he launched new medical technologies as a startup CEO.

In his free time, Tim has climbed the peaks of Mount Olympus, went hang gliding from the cliffs of Rio de Janeiro, and ballooned over Belgium. He earned scuba certification in Turkey, learned to ski in Slovenia, and ran the Serengeti with a Maasai warrior. He acted on stage in Portugal, taught negotiations in Germany, and chaired a healthcare conference in Holland. Tim studied psychology in France, radiology in England, and philosophy in Greece. He has enjoyed ballet at the Bolshoi, the opera on Lake Como, and the symphony in Vienna. He’s been a marathoner, paratrooper, triathlete, and yogi.

Intent on combining his creativity with his experience, Tim began writing thrillers in 1996 from an apartment overlooking Moscow’s Gorky Park. Twenty years later, his passion for creative writing continues to grow every day. His home office now overlooks a vineyard in Northern California, where he lives with his wife Elena and their two daughters.

Tim grew up in the Midwest, and graduated from Hanover College with a BA in Philosophy and Mathematics. After military service and work as a financial analyst and foreign-exchange trader, he earned an MBA in Finance and an MA in International Studies from the University of Pennsylvania.

Thank you for taking the time to read about the author. Tim is most grateful for his loyal fans, and loves to correspond with readers like you. You are welcome to reach him directly at tim@timtigner.com. Meanwhile, consider visiting www.timtigner.com where you can get one of his eBooks for free.