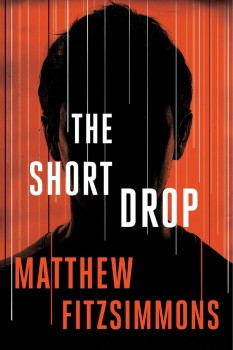 I got stuck on this one, coming up with one reason after another to procrastinate. (Sorry, editors.) OK, the two days in the hospital were a valid excuse, but I was conscious the whole time and could theoretically have been writing. Anyway, I decided to try Matthew FitzSimmons’ writers’ block technique – lying on the floor on my back, staring at the ceiling. That ended up causing further delay when I had to go find my hammer, patching compound, and ladder to fix the nail pops I noticed while not overcoming the desire not to write.

FitzSimmons is the author of THE SHORT DROP and the subject of this profile. The book has been exceedingly well-received, jumping to Number 1 on the Amazon best-seller list in several Thriller categories after introduction as a Kindle First selection. Very impressive stuff, and maybe just a little intimidating to someone profiling him.

Matthew attended Thrillerfest before he started writing thrillers, a curious chronology. I asked him about that and he said, “I’d reached a despairing point when I felt my life had slipped out of my control. The book was a way to reassert control, if not over my life, then at least over a fictional one. It became my refuge. I don’t know that it saved my life, but it certainly helped me rediscover it. It was honestly quite late in the writing process that it occurred to me that it might interest a reader other than myself.”

Here’s a short blurb about THE SHORT DROP so you don’t have to just believe me when I recommend the book.

A decade ago, the fourteen-year-old daughter of Senator Benjamin Lombard disappeared in a most sensational missing-person case. And now, Lombard is running for the presidency and the mystery is still unsolved. Gibson Vaughn, hacker, ex-Marine, and the missing Suzanne’s close friend is asked by Lombard’s former head of security to help investigate new evidence about her disappearance.

Haunted by tragic memories, he jumps at the chance. Using his military and technical prowess, he discovers multiple conspiracies surrounding the Lombard family. With new information surfacing that could threaten Lombard’s political ambitions, Gibson must stay one step ahead of the powerful, ruthless players who will do anything to silence him as he navigates a dangerous web to get to the truth.

FitzSimmons is a talented and unique writer. My first inkling of that was reading a piece he’d written about, of all things, Lyle Lovett. Before that, Lovett’s claim to fame in my book was his escape from Julia Roberts. After reading FitzSimmons’ piece, I downloaded Pontiac, Lovett’s 1987 album. It takes a special kind of writer to get me to shell out $9.99 for a country album, but I did, and I’m glad.

To make sure that wasn’t a fluke, I asked him to write another, equally compelling piece on a subject of his choice. He did, and here it is:

“I’ve always been a fan of John Gardner’s Grendel and Anne Rice’s Interview with the Vampire, both of which came out within five years of each other in the early 1970s. Both books tell their stories from the perspective of the monster, reimagined as sympathetic figures. At the same time, the classic American hero–the cowboy–was becoming bloodier and less noble in films like The Wild Bunch and The Outlaw Josie Wales. I’ve always been fascinated by that transitionary period in the aftermath of Vietnam and Watergate when our heroes became monsters and our monsters became our heroes. It’s the backdrop against which I was raised.

“I was born on Columbus Day–something I was proud of when I was a child because Columbus was a hero. He’s an object lesson that history is written by the victors. Well, he’s a hero no longer, and he has plenty of company. I think that’s partly why the thin line between hero and monster always appeals to me. Take the classic ‘80s thriller, Die Hard. John McClane (Bruce Willis) is trapped in an unfamiliar, confining space with a team of people trying to kill him. Only through ingenuity and determination is he able to persevere, hunting them down and killing them one at a time until he is finally safe. Coincidentally, this is the same plot as the film Alien. Except that the John McClane role is played by a nine foot, acid-for-blood xenomorph and in the finale, the roles are reversed–in Die Hard, Hans Gruber is jettisoned out a window by John McClane while in Alien, Ripley jettisoned the alien from the ship. Heroes and monsters. Monsters and heroes. It just depends who is privileged in the narrative.”

Pursuing this theme, he told me that his Google search history would be very damning in court. So naturally I asked him about something he’d actually done that a prosecutor might really enjoy.

“When I was 23, I worked in New York City for a well-known Broadway figure. I was the classic miserable personal assistant whose friends envied him for having gotten such a big break. One afternoon, he handed me hundreds of dollars and an address in the West Village. He didn’t tell me what it was for, but I went to the address.

“I was greeted at the door by this stunningly hip woman in a green Kimono and dark sunglasses. I remember she gave me a pitying look before selling me a brick of pot. A literal brick, which I put in my backpack and cabbed it back uptown. That night, I thought about what I’d done and how little I’d considered the consequences of being caught. The possibility had simply never crossed my mind. It was an ugly thing to recognize about myself, and I didn’t like that my ambition had muted my principles and my common sense. I didn’t like who I was becoming, and it was the beginning of the end of my time in New York.”

And finally, his summation of writing, writers, and himself.

“Writing is such an interestingly sadistic profession. We create these characters that we like and care about – even the nasty ones. But then writers take such glee in putting them through hell since otherwise it would be a dull book. And I remember grinning in a not entirely sociable way about that. The grin unnerves me.” 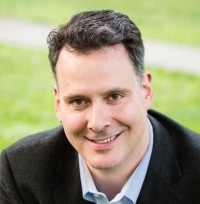 Matthew FitzSimmons was born in Illinois and grew up in London, England. He now lives in Washington, D.C., where he taught English literature and theater at a private high school for over a decade. The Short Drop is his first novel.