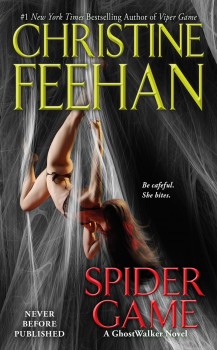 Christine Feehan is a name that can be found on a slew of novels that fit into many categories.

A true creator of perfectly-matched duos and action-driven tales, Feehan is a master at her craft. Edgy, dark, dangerous, and highly-charged when it comes to the romance side of things, her incredible series’ keep coming—with two new ones waiting on the horizon.

This month, she takes time out of her busy schedule to chat with The Big Thrill about her new release, SPIDER GAME and her path to success.

You have stated that you have a “preconceived” notion for your characters, yet they rarely listen. Can you explain to our readers how your characters take a different path while you’re in the writing process?

Sometimes I have a scene in my mind that I think is really great, but the characters take a different direction. Often the male says or does something, and I think, “How am I going to get him out of this one?” It is then that my original path alters.

Seeing as that you have written since childhood, is there a teacher/mentor you remember during your school years that supported your writing?

I had some extremely great English teachers. Sadly, I did have one that told me I would never succeed because I left his class. But I found a love for words in my English classes, and that is what stuck with me.

Do you have a certain “surrounding” you need while you’re writing? Such as, there are authors who have to have music playing in the background. Is there anything you need in your writing “habitat” to get lost in the story?

I taught myself early-on to write anywhere, or if anything was going on at the time. I had a lot of children, so I learned to be able to write even with a lot of noise in the background. I do like to have music now, because that training early-on has made me need to have something going on in the background.

I find it extraordinary that you have the various series: Dark, Ghostwalkers, Sea Haven, etc.), yet you also have incredible Christmas Stories for readers to enjoy. Is it easy for you to jump from one genre to another?

I have to, actually. I have so many stories in my head that I must be able to switch genres as fast as possible just to get them out.

Is there another genre you wish to explore in the future that you haven’t?

There are more series I plan on writing, but I do like romance with that small touch of paranormal.

Is there a specific hero or heroine in your series that perhaps is “closer” to you than the others? Maybe one that has turned into a muse of some sort?

Usually, it’s the one I’m working on at the time. If there is a character that is closer to me it is usually the entire book, not just one specific character. Of course, there are one or two that call to me, but again, it is their story.

SPIDER GAME is the newest novel in the Ghostwalkers paranormal romantic suspense series. Could you give readers an inside look into the story?

Trap is a genius who has lost his way due to several circumstances. Cayenne is a pretty deadly heroine, who was raised from birth in a cell, having absolutely no idea of what a relationship is. SPIDER GAME is their story—and it is extremely action-packed, poignant, and very sexy.

The stories you write are suspenseful, of course, but how exactly do you constantly find that sexually-charged core for the characters? You never seem to fail at putting teams or duos together that really work with readers. Is there a recipe you follow?

It’s a matter of knowing the characters from the time they were born, I believe. Every move that they make; their strengths and weaknesses. Once you know everything about them it’s easy to match them up. The characters dictate their relationship, so some are all over each other and I can’t seem to separate them, while others are a little more standoffish and more difficult to get them together.

Is there a new series on the horizon?

There are actually two new series coming up. The first is my Shadow series. The first book, Shadow Rider, will be out in June and I am very excited about it. I have been planning it for a few years now. Even though it is set in Chicago it still has a “small town” feel to it. My characters’ territory is set next to Little Italy. It’s about family, but is edgier and grittier than what I have written previously.

The second series is my motorcycle club series. I have been researching this one for a few years, as well. When I started the Drake Sisters series, I knew this particular series would come to life. The last book in the Sisters of the Heart series, Bound Together, will also be the first book of the motorcycle series. It will also be a lot grittier because my heroes were all raised in secret schools for assassins located in Russia.

And…Wild Cat will appear. Can you tell readers a bit about how the Leopard series continues?

I always end with this question: If you could have lunch with one author, living or dead, who would it be and why?

That’s a difficult one. There are too many dead ones to pick, so I will go with a live one. LOL! Even that is hard because I have so many favorites, but I have never met Kristen Ashley. Her stories are very character-driven and she is very good at pulling emotion from the character and making the reader feel it. She is very, very good and I would love to sit down and chat with her. 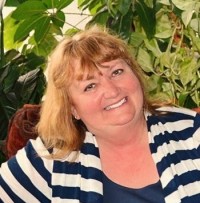 Christine Feehan is the #1 New York Times bestselling author of more than 40 novels, including five series. Each of her four series has hit #1 on the New York Times hardcover or mass market bestseller list. Feehan has received numerous honors throughout her career, including a nomination for the RWA RITA Award, a Career Achievement Award from RT Book Reviews and the Borders Lifetime Achievement Award. She lives in northern California.