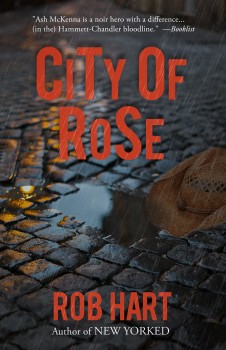 CITY OF ROSE brings to life the winding streets and wet alleys of Portland, Oregon, where former thug Ash McKenna struggles to rebuild his life, away from his dark past in New York City.

The second installment of Rob Hart’s Ash McKenna series, CITY OF ROSE takes place less than a year after New Yorked, pulling the reader along on a noble quest to find a lost little girl.

CITY OF ROSE is full of action, witty dialogue, and interpersonal struggle. Readers who loved Ash’s direct, and at times brutal tactics in New Yorked will be pleased to see how Ash has learned from his big city trials and tribulations…Mostly.

“The important thing is, he’s always got to believe he’s doing the right thing,” says author Rob Hart. “And the reader has to believe that, for all his poor decisions, Ash is the kind of guy who’s going to throw down and get you back in a bad situation. He means well, and he’s open to growth. I think if I can get that across, the reader will forgive the fact that he’s a bit of an idiot.”

“The big bar fight I like a lot,” Hart adds, “because it’s Ash cutting lose and accepting things about who he is. It’s the first time in CITY OF ROSE that he’s really being honest with himself, and that honesty is pretty ugly.”

CITY OF ROSE, however, is not all fists and fights—there is also heart. “I love the final chapter,” Hart says. “I hit an emotional beat there I wasn’t even expecting. Again, a moment of truth, and this one snuck up on me. It was the moment the book really came into focus for me.”

Aside from the action and characters, readers will also appreciate Hart’s attention to setting in CITY OF ROSE, which serves as a vividly-detailed and often visceral mirror into Ash’s mental state—but the thug with a heart of gold won’t stay limited to the murky underbellies of Portland and The Big Apple.

“New Yorked was supposed to be a stand-alone,” Hart says. “But around the time I was wrapping it up, I had ideas about other books, and I was also wondering what Ash would do next. Then I realized a lot of the places I wanted to write about—Portland, a hippie commune in Georgia, Eastern Europe—I could visit with Ash as the lens. And then it became a series about a young guy growing up and finding his moral compass. Once I thought of it in those terms, it clicked.”

When not writing Hart spends most of his free time researching, “About people I know, or people I want to know more about. Or a book I heard about and everyone is talking about it and I don’t want to get left out…Sometimes reading feels a bit like homework. Which isn’t so bad.”

He also enjoys putting a unique spin on the art of cooking. “I love the science side of it,” he says. “My mac and cheese recipe utilizes sodium citrate, which I had to special order off the internet. And I am in love with my Anova sous side cooker.”

Fans of Hart’s work will be pleased to hear that, aside from at least two more books in the Ash McKenna series, Hart will also be a contributor in Jason Starr and Chantelle Aimee Osman’s Serial Killer series, set to e-publish bi-monthly beginning Fall 2016, with an expanded print edition to follow in summer 2017. Something to look forward to after you enjoy CITY OF ROSE. 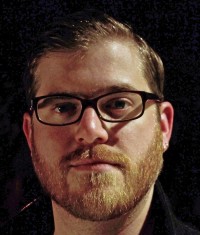 Rob Hart is author of New Yorked, the first Ash McKenna novel. He is the associate publisher at MysteriousPress.com and the class director at LitReactor. Previously, he has been a political reporter, the communications director for a politician, and a commissioner for the city of New York. Rob is the author of The Last Safe Place: A Zombie Novella, and his short stories have appeared in publications like Thuglit, NEEDLE, Shotgun Honey, All Due Respect, and Helix Literary Magazine. He lives in New York City.

Visit him online on his website or at @robwhart.