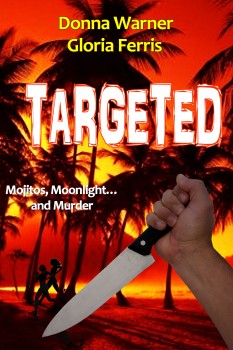 That is the description of the book that Donna Warner suggested I use in this article, and I have no problem doing just that, as you can see because you just read it. Now, let me add a little of my take on that. Danger in unexpected places for me lurks in asking questions of authors that elicit answers like this:

How do I work that stuff into an article about their book? Oh, never mind, I just did.

They couldn’t be total loons (living on the shores of Lake Huron, they certainly know all about loons) because they did write a book together. And I give them enormous credit for the fact that they are still friends and intend to do it again. I burned my co-author in effigy.

Enough frivolity. Here are some words about TARGETED:

Looking forward to a week of sipping mojitos and moonlight walks on a Caribbean beach, Jordan Blair and her friend, Ellie, arrive in Le Ceiba in Honduras, unaware that they have attracted the attention of The Watcher, and are at that very moment framed in the receiving side of his high-powered binoculars.

And then things turn sinister. The previous occupant of their hotel room has vanished. No one seems concerned, but the police presence says they should be.

As questions arise and events unfold, Jordan trusts the wrong man ends up fighting for her life and Ellie’s. And she wonders if their return flight home will be in body bags.

An intriguing plot and exciting story by two professionals—Gloria having escaped the clutches of terminal tedium as a technical writer for a nuclear power plant, and Donna editing endless books for people like me and having to tell them some hard truths. Donna’s lesson from that is she awards an average Amazon review rating of 4.7.

“After being a fiction editor for seven years and now teetering on the other side of the critique fence, I don’t post a review unless I can post a positive one. I can’t bring myself to make personal comments that might cause an industrious, often poorly paid, author to be branded with unflattering writing skills.”

Often poorly paid? Are any of you authors out there well paid? Or even paid?

And Gloria claims writing technical procedures was the “best job I ever had.” Fortunately, she quickly qualifies that by adding, “best paying job, I should say,” because we all know being an author is the best possible job. She does note that even though “there was no characterization at all, the settings were technical, and the plot was always the same,” there was some tension. “If the protagonist doesn’t follow instructions, then ka-boom.”

Gloria tells me that team writing “was a new venture for both of us. Donna and I have been friends since we were teenagers, and she has been my front-line editor from the beginning of my writing career.”

TARGETED started life as a short story by Donna, and Gloria really liked it so they decided to expand it into a novella.

Gloria: “We came up with extra characters, and changed the plot to include a few more bumps in the road. Donna wrote the first draft, and then handed it over to me. I edited it, added some additional scenes, and gave it back. I can’t remember how many times we went back and forth before we were both satisfied that the story was seamless. Not my voice, not hers, but a unique combination that is perfect for a suspense thriller with humorous undertones.”

And Gloria survived her stint in the precarious world of nuclear fission. “I learned early how to stay out of hot spots. I did get my shoe contaminated once, but four enthusiastic rad techs fixed me up. I was not a radiation worker and not expected to pick up any radiation dose. The maws of hell would have opened up to engulf anyone so careless in that place.” 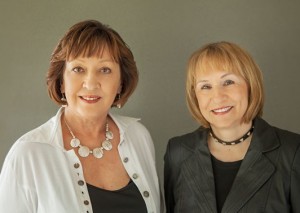 DONNA WARNER is a crime fiction novelist and freelance literary editor. Her debut novella, Targeted, is co-authored with award winning novelist, Gloria Ferris. Targeted will be released by Black Opal Books on Dec. 5, 2015.

Donna enjoys helping others with their communication projects including English as a Second Language (ESL) students. She is an avid reader of thrillers and enjoys networking with other authors. Donna resides on a country property near Guelph, Ontario, Canada and spends summers at their cottage — kayaking, boating, and fishing. She is a member of the International Thriller Writers and the Crime Writers of Canada.

GLORIA FERRIS is a former technical writer for a nuclear power plant, a job with lots of action verbs but the plots sure dragged. Now, she writes crime fiction. “Cheat the Hangman” won the 2012 Bony Blithe Award, while “Corpse Flower” is an Unhanged Arthur Award winner. Shroud of Roses and Targeted are her latest releases. Gloria sometimes writes YA urban fantasy just for the heck of it and is a member of Crime Writers of Canada, CWA (UK), as well as the International Thriller Writers.

A Death In The Family by Michael Stanley

Blood Of The Innocent by Cheryel Hutton