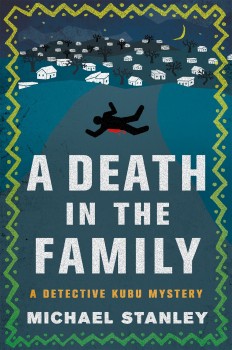 Michael Stanley is the writing team of Michael Sears and Stanley Trollip. Both were born in South Africa and have worked in academia and business. Stanley was an educational psychologist, specializing in the application of computers to teaching and learning, and a pilot. Michael specializes in image processing and remote sensing. He also contributes to the monthly Africa Scene feature in The Big Thrill.

On a flying safari to Botswana, they had the idea for their first mystery, A Carrion Death, which introduced Detective “Kubu” Bengu of the Botswana Criminal Investigation Department and was short-listed for five awards. The series has been critically acclaimed, and their third book, Death of the Mantis, won the Barry Award for best paperback original mystery and was shortlisted for an Edgar Award. Deadly Harvest–the next book in the series–was shortlisted for the ITW best paperback original thriller award.

Set amidst the dark beauty of modern Botswana, A DEATH IN THE FAMILY is a thrilling insight into a world of riots, corruption and greed, as a complex series of murders present the opera-loving, wine connoisseur detective with his most challenging case yet.

When grief-stricken Kubu defies orders to bring the killers to justice, startling and chilling links emerge, spanning the globe and setting a sequence of shocking events in motion. Will Kubu catch the killers in time … and find justice for his father?

What inspires you about Botswana?

Botswana is a beautiful country with friendly people, superb wildlife areas, and good governance.  It may seem odd that we–as South Africans–chose to set our books there rather than at home.  However, we have spent time there in various capacities and know the country well.

Apart from giving us an excuse to explore parts of country we don’t know so well, it allows us to investigate issues important to the region that aren’t the legacy of the apartheid era in South Africa.

So far our backstories have been blood diamonds, the aftermath of the Rhodesia/Zimbabwe war, the plight of the Bushman (San) peoples of the Kalahari, murders for body parts for black magic, and, in A DEATH IN THE FAMILY, the spreading influence of China in the region.

Do you have personal experience of the situations Detective Kubu faces?

We’ve spent time with the police in various parts of the country and are fortunate to be friendly with the previous commissioner of police.

On one memorable occasion, the then-director of the Criminal Investigation Department took us around Gaborone, showing us different areas and discussing the crimes that had taken place there.

In particular, he told us the story of how a young girl had been abducted and murdered for body parts. The police were unable to solve the case leading to accusations that they were covering it up and that senior officials were either involved or turning a blind eye.

Eventually there were riots and a man was killed by the police.  The government called in Scotland Yard from London to produce an independent report, but that report has never been made public, and the case has never been solved.

He suggested that we should write about that, and our fourth book, Deadly Harvest, is based on that case. It was a finalist for an ITW award.

How is the series changing since it began?

We think the books have become darker and the issues more challenging.  We call it “Sunshine Noir.”

Our protagonist, whose nickname is Kubu (hippopotamus in the local language), has developed as he has had to face different challenging situations, some of which threatened his family and his beliefs.  He is now much more experience, as are we!

We also introduced a female detective in DEADLY HARVEST–the first woman in the CID–and she has shaken up the CID and Kubu.  She isn’t willing to sit back and wait for things to change.

She wants change right now.  We like the bond that has formed between her and Kubu, but we also like the friction and tension that can arise because of their different perspectives.  Our readers like that too.

You have received high praise from some of the best crime writers internationally. What aspect do you feel most proud about your novels?

As relatively new writers–we started our first novel 12 years ago–we are delighted by the critical reception our books have received.

Beyond that, we are proud that readers say that the books are seamless.  Our two styles meld through multiple edits and discussions—usually over Skype, as we live in different cities.  Sometimes our friends say they can tell who wrote the first draft of a piece, but they are wrong half the time!

We’re also pleased that readers of McCall Smith’s fine books recognize the same culture in our novels and appreciate the sense of place, yet also see the darker side of the country.

What elements make the latest novel, A DEATH IN THE FAMILY, different to similar novels set in the United States?

As we mentioned before, all our books have a context that is generated by real contemporary issues in the region.  In the case of A DEATH IN THE FAMILY, it is the growing Chinese influence in southern Africa.

When Stanley was driving along a road in northwest Botswana–a road we’ve both driven several times before–he found it newly paved, with no economic reason justifying the upgrade.

Then he saw a new, small village next to the road–a Chinese village–surrounded by a barbed-wire fence.  Subsequent research showed that many infrastructure projects were being done by Chinese companies, which imported Chinese labor, ignoring the locals.

So there was the situation that locals were being sidelined by the Chinese; the Chinese were making no attempts at integrating with the locals and were isolating themselves; and the natural friendliness of the locals was being rebuffed by the Chinese.  This produces obvious friction and a potential flashpoint, particularly in a country where work is hard to find.

On the other hand, there are aspects of the novel that are quite universal.  Kubu’s beloved father, a harmless old man, is knifed to death.  Kubu’s sorrow and anger and desire for revenge are human reactions that would be the same anywhere, although his father’s funeral and the way of mourning are peculiar to the African cultures.

Actually, Kubu makes a visit to New York in this book, so a small part of it is set in the United States.  Perhaps seeing the city through his eyes is a bit different, however.

Do you create a detailed outline for a novel before you begin, and how do you allow the story to develop?

We have done it both as “plotters” and as “pantsers.”  When we started our first novel, we had no idea where we were going and had to learn about writing, about working as a team on a work of fiction (we’ve had a lot of experience with collaboration in the non-fiction world), and about developing a story.

We started with a premise which lasted a whole chapter, and then we were on our own.  It seemed to work, but we felt a touch guilty.

It seemed an unprofessional way to write a novel.  So for our second book, The Second Death of Goodluck Tinubu, we had a number of sessions together planning, drawing mind maps that overflowed the table, talking through structure and characters.  We drew up a detailed outline, and the final book follows it pretty closely.

It is more of a “locked-room” type mystery, and, perhaps, that process works better there.  With our third novel it didn’t work: we had to throw a lot of it away and let the story tell us where it was going.

That’s pretty much how we write our books now.  In the meantime we’ve learned that many successful writers work that way.  We still get together and brainstorm and do rough outlines, but we don’t expect them to last.

Are you working on another novel in the series?

In fact, we’ve just finished the next Kubu thriller. It’s a bit different from the previous books as it’s based more on a premise than a regional back story.

The Kalahari Desert is huge and poorly explored, and many insects and plants are known only to the Bushman people.  In the book, we postulate the existence of a plant with life-extending properties and explore the greed that it generates–desire for wealth, desire for health and longer life, and even the insidious desire to do good.  And Kubu is right in the middle of it as usual. 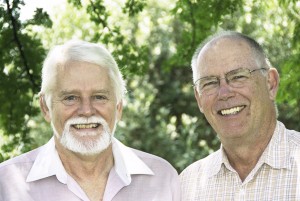 Michael Stanley is the writing team of Michael Sears and Stanley Trollip. Both were born in South Africa, and have worked in academia and business. On a flying safari to Botswana, they had the idea for their first mystery, A CARRION DEATH, which introduced Detective “Kubu” Bengu of the Botswana Criminal Investigation Department.