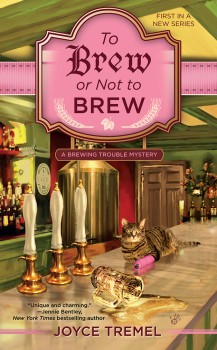 TO BREW OR NOT TO BREW, the debut cozy mystery by Joyce Tremel out on December 1, features Max (Maxine) O’Hara, a certified brewmaster who is opening a brewpub in Pittsburgh. Although there have been minor problems, she rejects the possibility of sabotage until her assistant Kurt is found dead. She sets out to investigate with the help of other small business owners in the neighborhood and her new chef Jake, but then there is another death….

Tell us about your book, TO BREW OR NOT TO BREW.

It’s the first in the Brewing Trouble cozy mystery series being published by Berkley Prime Crime. My protagonist, Max O’Hara, is in the process of opening a brewpub in a Pittsburgh neighborhood and finds herself involved in solving the murder of her assistant. Along the way she gets help from a bakery owner who’s a rabid Steeler fan, a cranky World War II vet, and of course, her new chef, Jake, who was her high school crush.

Details of Pittsburgh life add a nice touch to your mystery. Have you always lived in Pittsburgh?

Yes. I know Pittsburghese and I’m not afraid to use it! The city has gone through a lot of change over the years and it seemed like the perfect place—to me, anyway—to set a light mystery. Pittsburgh is really a small town disguised as a big city and I think it makes a great setting.

I’m not sure what to say about myself. That’s always a hard question to answer! I’ve been married to the love of my life for thirty-five years and we have two grown sons. And a cat.

How long have you wanted to be an author? How difficult has it been to become a published author?

I’ve always liked to write—I just never thought to pursue it seriously until I did some freelance manuscript reading. It dawned on me that I wrote at least as well as what I was reading and critiquing. To make a long story short, TO BREW OR NOT TO BREW is the fourth book I wrote, but the first to be published.

Why did you choose to write a cozy mystery?  With your background as a police secretary, did you consider writing a police procedural?

I kind of evolved into writing cozies. Two earlier novels were almost procedurals—my protagonist was an ex-police officer. Another book—which I absolutely love and still hope to get published someday—features a smart-ass police secretary. My agent submitted that book to Berkley and the editor liked it but it wasn’t cozy enough for their line. She liked my voice and wanted to know if I’d be interested in writing a cozy. I came up with the brewpub idea, wrote a proposal and three chapters, and ended up with a three book deal. I figured that was a sign I should be writing cozies.

Are there certain authors who inspired you or who are particular favorites?

I grew up reading Victoria Holt and Phyllis Whitney and I still have a soft spot for that kind of gothic romantic suspense. One of my favorite cozy series is Julie Hyzy’s White House Chef series. Another is Cleo Coyle’s Coffeehouse series. Favorite non-cozy authors are Julia Spencer-Fleming, and my good friend Annette Dashofy.

Why did you choose beer brewing?  Did it require a lot of research?

I knew I would need some kind of a hook for the series so I did a little research. There were all kinds of cozies with crafts, cooking, coffee, and wine. I wanted to do something no one else had done. Craft beer was becoming more popular all the time and I thought it would be a good fit for a cozy series. I definitely had to do some research on the actual process of brewing. I contacted one of the local craft brewers who showed me around his brewery and gave me a little tutorial on brewing. Whenever I have a question, he’s always quick to answer.

You include two recipes, for Black Forest Cake and Buffalo Chicken Pierogies. Was that fun to do?

Yes! Especially the pierogis. Pierogis are big in Pittsburgh. The Pirates even have mascots in pierogi costumes who run a race during the seventh inning stretch. Seriously. And Black Forest Cake is just plain yummy. Who doesn’t like chocolate and cherries and whipped cream? I have some really tasty recipes planned for the next book, too.

I enjoyed the cast of characters—Max’s family, the other small business owners in the area, Max’s book club—and liked it that Max’s romance was with Jake rather than with a police detective and that it was not dragged out over several books. How carefully did you think about having a cast of continuing characters? How many story ideas do you already have for future books in the series?

I’m glad you liked that I didn’t drag out the romance. I originally planned to let it evolve over several books, but Max and Jake didn’t see it my way. I’ve learned to never argue with my characters.

A continuing cast of characters is important in a cozy mystery. I think readers often buy the next book because of those characters. My favorite character is Elmer, the 92-year-old World War II vet. He’s cranky, but in an amusing way and he’s not afraid to say exactly what he thinks.

I finished book 2—tentatively titled Tangled Up in Brew—and I’m working on book 3. Book 2 takes place at a Brews and Burgers festival, where Max solves the murder of a nasty food critic. Book 3 will involve Oktoberfest, a murdered Sousaphone player, and ex-Cold War era spies. I hope eventually there will be a book 4, but I’m trying not to think that far ahead.

Are there any other types of books you are thinking about writing in the future?

I’d love to eventually publish the police secretary novel I mentioned earlier and finish the sequel to it. I’d also like to write a mystery set in the 1940s since I’m obsessed with that era. For now, though, I have my hands full with the Brewing Trouble books.

Do you have any advice for aspiring writers, something you wish you had known about when you were starting out?

I wish I’d known how long it could take to get published. My advice for new writers would be to keep learning the craft and keep writing. Don’t let the rejections get you down—they’re part of the process. Don’t give up if it’s something you really want. Quitting was never an option for me. I was determined to eventually write something that would sell. 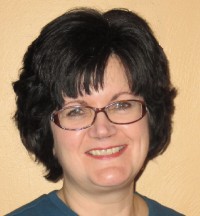 Joyce Tremel was a police secretary for ten years and more than once envisioned the demise of certain co-workers, but settled on writing as a way to keep herself out of jail. Her flash fiction has appeared in Mysterical-e, and her non-fiction has been published in the Pittsburgh Post-Gazette and the Pennsylvania Chiefs of Police magazine. She lives in a suburb of Pittsburgh with her husband and a spoiled cat. To Brew Or Not To Brew is her first novel.