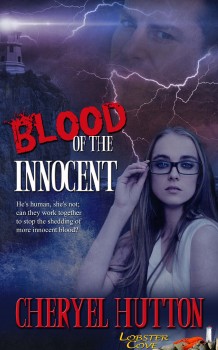 Veronica is a biochemist and a vampire. She likes humans more than most, but physical attraction to one is unthinkable. Joe, a human, needs Veronica’s help to find his brother’s killer, but she has no plans to get involved in any sort of human problem. What neither counts on is the attraction that pulls them together, and the conspiracy that could destroy them both.

Cheryel Hutton trained as a registered nurse, which only partially satisfied her love for science. When her health forced an early retirement, she took advantage of the development to take classes and study the sciences, primarily biology, on her own. Combining that knowledge with her other love, writing, she uses real science to write fantastic stories about vampires, dragons, bigfoot, and other creatures. She especially likes to use fiction to speculate on how mythical beings could actually exist. BLOOD OF THE INNOCENT uses genetics to offer some logical conjectures about how vampires might exist.

BLOOD OF THE INNOCENT is part of the unique multi-author Lobster Cove series from Wild Rose Press. What was it like working on the project?

The books revolve around Lobster Cove, a fictional town on the eastern coast of Maine near Bar Harbor. The series includes all kinds of different stories: historical, contemporary, women’s fiction, erotica, suspense, paranormal, comedy. What they have in common is the setting and a sprinkling of crossover characters. The authors support each other, and the series editor, Lori Graham, made the complicated information easy to find and use. Being a Lobster Cove author has been a great experience, and I’m glad I could be a part of it.

Why vampires? Aren’t they passé?

Why not vampires? For all the talk about how the demand for fictional vampires has dried up, there is always an audience for them. I worked hard to put a different, logical twist on the mythology. My vampires can literally be your next-door neighbor. Because they’re strongly psychic, that neighbor could hold you with his or her mind while taking your blood. Or your life.

What inspired this book?

Actually, it was my heroine, Veronica Teal. One night I was lying in bed and decided, just for fun, to think up the oddest vampire I could. Almost immediately, Veronica popped into my head. There she was, tall, beautiful, with gorgeous long blonde hair. She was sipping blood from a wine glass while reading a scientific journal. I quickly realized she had no idea she was pretty, nor did she truly care. She was much more interested in the latest research in genetics. Maybe not as odd as I was going for, but intriguing. When I heard about the Lobster Cove series, she whispered in my ear that her story would fit. I put aside what I was working on and started what would become BLOOD OF THE INNOCENT.

You have your own series, Ugly Creek, which focuses on light and funny romances. Is it hard to write light and funny then do a one-eighty and write dark and creepy? How do you handle the transition?

The transition is easy. The stories are so different it’s easy to know “where” I am. I enjoy going back and forth between scary and funny. I love to dig deep into the things that keep us up at night, but staying in that dark place gets to me after a while. It feels good to go to a place where I can play with odd, quirky characters in an odd, quirky town, where just about anything can happen.

Are you planning to write other dark paranormals?

Yes. Actually, I have two manuscripts in different stages of development, and more swirling around in my head. 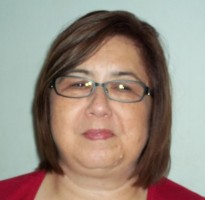 Cheryel has two beautiful, talented daughters and several extremely adorable grandchildren. She lives near Jacksonville, Florida with her husband, two dachshunds, and a muse named Quill who, of course, is a dragon. She is the author of Keepers of Legend, The Ugly Truth, and Secrets of Ugly Creek, all published by The Wild Rose Press, Inc., as well as Shadows of Evil by Samhain Publishing.

To learn more about Cheryel, please visit her website.