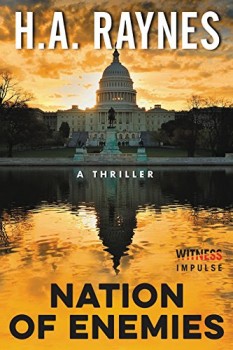 On the eve of the 2032 presidential election, the country is deeply divided and on the brink of civil war. A decade before, the U.S. government had mandated that all citizens be issued biochips carrying their full medical information and a digital health indicator. Then they made the information public leading to widespread and devastating consequences.

The Liberty Party’s presidential nominee is assassinated in a highly-coordinated, masterful attack. This sets off a chain of events that will change the course of history and leave America’s inalienable rights of life, liberty and the pursuit of happiness dangling on the precipice of extinction.

The author graciously answered a few questions for The Big Thrill.

Please give our readers an overview of your personal life and professional career?

I’m married and a parent to two kids and a cockapoo. My professional career up to this point has been as a producer in advertising, making commercials. Other than that, I learned to swim at the age of thirty-two. Played spin-the-bottle with Nicolas Cage. And have jumped out of a plane. Writing is much more my speed than the latter two. I’ve been writing as long as I can remember, though more seriously and committed to the craft in the last ten years. For me, it’s equal parts fun and sanity. In the busy world we live in, both fun and sanity can be hard to hold onto. But no matter what, I know they’re mine for about eight hours every week.

Set in 2032, to what extent could NATION OF ENEMIES, be considered a critical allegory of our times?

I have to say, even as I was writing and researching NATION OF ENEMIES, news stories would crop up hinting to this future world I was creating. A few times I worried that somehow the real stories of today would catch up to the book before I was published! Between NSA leaks, abuse of government power, refugees fleeing war-torn countries, and religious fanatics taking up arms, I couldn’t escape the frightening possibilities. One of the main comments I receive from readers is that they were terrified by the plot, truly able to envision some of the scenarios coming true. Unfortunately it’s not so over-the-top.

I wrote NATION OF ENEMIES in three years. Initially I had set the scene at around 2020. But it was published in 2015! For my readers, I wanted it to be a believable, graspable amount of time—in our lifetime. I needed it to be an election year, so that helped in the guesswork. And so taking into account all of these factors, I landed at 2032.

Which event or situation propelled the challenge to write NATION OF ENEMIES?

My inspiration was a five foot tall, white haired eighty year-old named Beatrice. About ten years ago we were talking and she was recounting the story of her family fleeing Poland during WWII. Everything and everyone she knew was suddenly gone. The houses and streets were empty. Regardless of their hopes and fears they had to escape. In what must’ve been a whirlwind, they emigrated to the United States. Now, I’ve heard stories about WWII, seen the movies, as we all have. But something about her story resonated with me. She looked directly into my eyes that day and asked, “Imagine that? Everything you know, just gone one day?” And I did. I brought the war home to the United States. Imagined people emigrating en masse from this powerful, “safe” country of ours. And NATION OF ENEMIES was born.

When did you become aware of your writing talent? What catalyzed the decision to become a writer?

It was a process, actually!  In fifth grade I had this amazing creative writing teacher who I remember vividly. Long hair, wire rim glasses, lanky. He had us call him Victor. Through him, my interest in writing was sparked. But it wasn’t until years later, after writing only journal entries, that I began to think of stories. When I was twenty-eight I wrote a screenplay, which was a finalist in the Massachusetts Screenwriting Competition. That boosted my confidence and I started thinking of writing novels. I took a class at GrubStreet (a great writing organization here in Boston), and one thing lead to another. Before long I was writing a novel (my first, still on my hard drive!). It’s hard to say exactly when I knew. Perhaps it was fifth grade. Or maybe it was later, when I couldn’t stay away from my computer.

In what way did your life change when you started writing?

For the first time in my life I had something completely my own. It was an escape from the stress of work. It was uncomplicated—unlike relationships with friends or family. It was pure. When I write it gives me peace, sanity, perspective. And though it’s changed over time, with kids and the inherent, ever-growing busyness of life, I still feel the same when I write. It’s an outlet that I need and I crave.

How do you manage the conflict between the personal and the creative?

Good question, though this can be taken a few different ways. Let’s see. Publishing takes me out of the creativity and makes it personal. Places the weight off the book and onto my shoulders to market the book. In all honesty, writers like to write. They don’t like to market their writing! Alas, that is life. It’s been a challenge to balance the two these past few months but I’m getting a handle on it. When I sit down to write now, I have to stop responding to marketing/PR emails about NATION OF ENEMIES. I need to focus on my new work.

However, if you’re referring to how I take criticism on my creative work, that’s different. Thanks to some fabulous writing courses and my invaluable writers group, I have a thick skin. I’ve heard it all and can take criticism—or leave it—depending on the situation. I love to hear how an early reader interpreted a scene and I especially want to hear it if it didn’t work for them. It makes me a better writer.

Which is your favorite and usual writing environment?

Due to the child situation in my house (two kids constantly vying for my attention), I have to get out of the house. I’ve been fortunate to find a haven at a nearby café. They have a lovely back room and the best lattes. If it ever gets too loud, I wear headphones and listen to classical music. But the moment I walk in, it’s like my brain and body switch into writing gear.

If you could, which other author’s work would you write a prequel or sequel to? Why?

I just love John Irving’s writing. His characters are so well-drawn and quirky and real… I would like to work with those characters, perhaps to tell what became of them down the line. Specifically, those in A Prayer for Owen Meany.

Is your creativity a reaction to your environment, an indefinable inner impulse, or both? If both, in what proportions?

Interesting question. NATION OF ENEMIES was a reaction, my incessant memory of my conversation with Beatrice about WWII. But the one I’m working on now is more of an indefinable impulse. I could not tell you why I’m writing it. But I know where it’s going and I love my characters and I have to see it through. It will be interesting to see what happens for the next book…

Both. They are who they are. They say what they will say. But I do steer the course of their actions, based on a loose outline and plot. On occasion one will surprise me. And if that happens, I sometimes need to look at that scene and see if it still fits. I always hope it does. And if it doesn’t…I file it away like a love letter.

Do you outline or record a story as it takes place?

After writing two meandering early works, I now religiously work with an outline. It’s loose enough to give me breathing room, but the guidelines help to keep me on track. Especially on NATION OF ENEMIES—working with several points of view, all of which must meet up later in the novel—I had to be very aware of where I was with each character in his or her storyline. They tangle easily.

What’s the time-frame of a finished draft and on average how many revisions does it entail?

NATION OF ENEMIES took me three years. That includes about three revisions before I sought out representation. This is writing just eight hours per week. I would say that I’ve grown better at managing my time in the past few years and hope my next one will take more like two years. I still work part-time and have two young children so the hope of having more time to write is a pipe-dream at this stage!

In what way do writers end up playing a social role?

I’m not sure at this stage. Perhaps social in a creative sense, contributing to society by communicating a different perspective. Writing a book like NATION OF ENEMIES will no doubt start a conversation about the times in which we live and in that way, I suppose it is social. It’s funny because I spent three years with my face buried in my computer and now that the book is out, I need to think of things like this, that have never occurred to me.

How do you spend your spare time, when you have any?

I smiled at this question. I cannot imagine having spare time. And if I had it…well I would either spend it with my children or writing. Or perhaps cuddling my cockapoo. 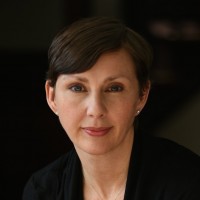 H. A. Raynes was inspired to write Nation of Enemies by a family member who was a Titanic survivor and another who escaped Poland in World War II. Combining lessons from the past with a healthy fear of the modern landscape, this novel was born. A longtime member of Boston’s writing community, H.A. Raynes has a history of trying anything once (acting, diving out of a plane, white water rafting, and parenting). Writing and raising children seem to have stuck.

To learn more about H. A. Raynes, please visit her website.