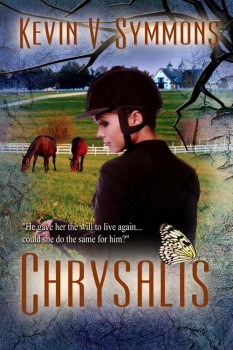 What do you get when you combine a plumbing sales professional, an expert Cape Cod boater, and former music student? You get an author like Kevin V. Symmons, who uses his unique background and experience to write thrillers such as CHRYSALIS, his newest novel.

In CHRYSALIS, the story revolves around Paige Fuller, a champion equestrian who is slowly making a comeback from a devastating riding accident. She feels that she lives in the shadow of her sister, Candy, who is more outgoing and has those classic “Cover Girl” looks that attract boys in the way that a seashore picnic attracts seagulls.

When childhood friend Morgan Cahill visits the Fuller family estate on the Massachusetts shore for the weekend, Paige is expecting that the Harvard football star will be polite but eager to get away—or to spend more time with Candy. Of course, Morgan is not just any boy, but the one that Paige has been secretly in love with since she was a little girl.

When Morgan falls for Paige, much to her surprise, it begins a romantic adventure that features twists, turns, dark secrets, thugs and ex-cons, and redemption—not to mention the 9-11 terrorist attacks as a backdrop.

One of the more intriguing aspects of this new romantic thriller is that it is mostly written from the viewpoint of an eighteen-year-old woman—a character very different from Symmons himself. He adds that in many ways, the story and the character chose him. Paige had a story to tell, and selected Symmons to tell it.

How did he get inside her head?

Symmons, who describes himself as an “avid movie and TV-aholic,” said that the big screen and small screen helped give him insights into younger female characters.

“I had a neighbor say to me, ‘Wow, you got in touch with your feminine side,’ ” he said with a laugh. “I don’t know where it comes from!”

He also used some of the women in his life, including his wife, Joan, as sounding boards and as beta readers.

In creating the characters, he was careful to avoid stereotypes. For example, Paige’s love interest seems to be the kid who has it all—money, intelligence, and athletic ability. But Morgan is not the shallow guy readers might expect. (He’s drawn to Paige, after all.)

“Sometimes we want to demonize the cool kids, but there’s a lot more to that role than we realize,” the author explained.

In many ways, it was the setting around Mattapoisett, a wealthy Massachusetts resort town overlooking Buzzards Bay, that helped shape the story. Symmons already had the first pages of the novel written, but reframed the story after visiting a horse farm in Mattapoisett. That visit also gave him insights into Paige’s back story, which included that devastating riding accident.

“We may all need some kind of catalyst when we’ve had a tragedy, to bring us back to life,” he said. In Paige’s case, that catalyst is her childhood crush—now all grown up.

His novels don’t usually begin with a definite plan. It takes time for the story to evolve. CHRYSALIS took four years to write, off and on.

“It didn’t just emerge from me,” he explained.

When he starts to write, he knows where a book is going in general and has a central theme, but not all the details. “I am a panster, not a plotter. I sort of play around with the story line. It morphed along the way into a far more complex story.” He enjoys this process of discovery because it makes the writing itself more of an adventure. “Some of my writing friends have longer outlines than they do books.”

His method can cause some backtracking and rewriting, and it takes a good editor to help pull it all together, which was why he was so appreciative of the folks at Wild Rose Press.

In some ways CHRYSALIS is also a historical novel, set in 2001 with the events of 9-11 as a backdrop. “I wanted to capture a little of the confusion and terror that we all went through,” Symmons said. For him, the events of 9-11 resonated because he had been slated to fly just a couple of days after the attacks. “There but for the grace of God go I. In a bizarre way, that’s always sort of haunted me.”

Writing has now become a second career for Symmons. A self-described night owl, he has an office at his home in Plymouth, Massachusetts, where he retreats to write. Typically, he spends a few hours working in the afternoon, then takes a break to run errands and enjoy some family time. The evening is spent watching TV or a movie. In Symmons’s case, that might be called “research.” By 10:30 or so he is back in his office and often at the keyboard until 2 a.m.

What’s next for this versatile writer? Could a series be in the works? Perhaps one set on Cape Cod? If it’s a Kevin Symmons story, we’re in. 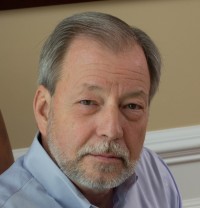 Kevin Symmons is a best-selling novelist and college faculty member. He served four terms as president of one of the Northeast’s most respected writing organizations. His 2012 paranormal novel, Rite of Passage, was a RomCon Reader’s Crown Award finalist and was an Amazon best-seller. His 2013 release, Out of the Storm, is a contemporary romantic thriller set on Cape Cod. It has gathered dozens of 5-star reviews and hit #6 on Amazon. His 2014 novel Solo, is a literate women’s fiction work already gathering critical acclaim. His new release from New York’s award-winning Wild Rose Press is a tense romantic thriller titled Chrysalis set on Buzzards’ Bay near his Cape Cod home. It has just been released. Kevin collaborated with an award-winning Boston screenwriter in adapting one of his story ideas for the screen. He is a sought after lecturer and public speaker.

To learn more about Kevin, please visit his website.