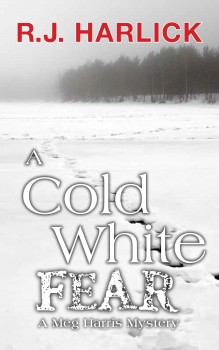 Weather played a vital part in the genesis of A COLD WHITE FEAR, according to R. J. Harlick. “Most people think winter and Canada are synonymous and yet only one of my previous books, Red Ice for a Shroud, takes place in winter. So I decided the seventh would capture its full fury. I also wanted to try my hand at a thriller. While the other books in the Meg Harris series are suspenseful as any thriller, they all have crime-solving plots. In A COLD WHITE FEAR, I wanted to place Meg in jeopardy from the get-go and watch how she musters all her resources to get out of it alive.”

About the writing of this latest entry, Harlick said, “I know Meg very well so the continuing development of her character easily flows from one book to the next. She is joined by Adjidamo, a young Algonquin boy who has appeared in earlier books. So the writing of both characters was relatively easy, along with the setting, Meg’s home, Three Deer Point, which I also know intimately.

“For me the hard part was the unfolding of the story within its narrow parameters. The action takes in less than a day and in a single location. Since a change in time or location were not tools I could use to move the story forward, I found myself delving deeper into the souls of all the main characters, including the bad guys, and used this to drive the story to its tumultuous ending.

“Because A COLD WHITE FEAR takes place in western Quebec—a setting I know intimately—and during the kind of blizzard I wish I didn’t know intimately, I didn’t have to do much research.” But some research was required. Aside from the standard Internet research, Harlick had her main character handling a gun for the first time, so off she went to a local gun club to hold, fire, and see “what it felt like.” Her books are, after all, set in Canada.

Although Harlick doesn’t outline she does know certain things before starting. She establishes the setting, the community, the social issues, and most of the main characters. She knows where the story will start and has a general idea of the arc. “But I’m a pantser,” she said. “I let the story flow from chapter to chapter. Rarely do I know whodunit until the very end. In A COLD WHITE FEAR, there is one scene in particular that appears close to the end that came as a complete surprise to me. Though I had done some foreshadowing, I hadn’t fully thought out the implications until I reached the point in the story where it needed to happen. For me it was a very difficult scene to write.”

All the titles in the Meg Harris series feature a color, and this is by design. “John D. MacDonald, one of my favorite authors, was the first [to use colors in his series titles],” Harlick said. “On cold winter nights I loved nothing better than to visit with Travis in the hot sun of Florida. I also love color, so it seemed fitting to use color in my Meg Harris mysteries, in part as homage to John D.

“The story idea always comes first. Once I decide on the location, I look for a color that helps define the location and will play a role in the plot. For A COLD WHITE FEAR, the action takes place during a raging blizzard that has turned Meg’s world into a swirl of pummeling white. I wanted to emphasize this and the blizzard’s inherent danger in the title. The book I’m currently working on, the eighth Meg Harris mystery, will take place in the Northwest Territories and purple will be the color.”

Harlick admits she loves reading mystery series. She likes to get involved with the main characters and enjoy watching their life unfold from book to book. She says this about Meg: “I don’t even think I made an actual decision, I just knew I was writing a series. When I first introduced her in Death’s Golden Whisper, I had a basic character outline. During the course of that book, she morphed into a fully formed person. I enjoy watching her evolve from book to book and will plant seeds about her life in one book that only comes to fruition a book or two later.

“What I like most about Meg is her tenacity to get something done despite all the obstacles I throw at her. I also like her compassion and her sense of fairness in wanting to ensure that justice is achieved.”

For all her novels, Harlick wants to entertain her readers for a few hours. But she also wants to introduce her readers to some of Canada’s magnificent wildernesses and to the indigenous people who have called these territories home for thousands of years.

According to Harlick, A COLD WHITE FEAR is “a fast-paced psychological thriller with many surprise twists that will keep you awake until the wee hours of the morning.” 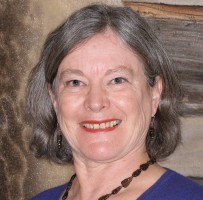 R. J. Harlick writes the popular wilderness-based Meg Harris mystery series set in the wilds of Quebec. Like her heroine Meg Harris, RJ loves nothing better than to roam the forests surrounding her wilderness cabin or paddle the endless lakes and rivers. The 4th book, Arctic Blue Death was a finalist for the Arthur Ellis Award for Best Novel. Silver Totem of Shame, the 6th in the series, was named one of the top ten summer crime reads by the Globe & Mail. A Cold White Fear is the 7th book in the series. R.J. is a past president of Crime Writers of Canada..

For more information about A Cold White Fear and R. J. Harlick and her work, please visit her website.